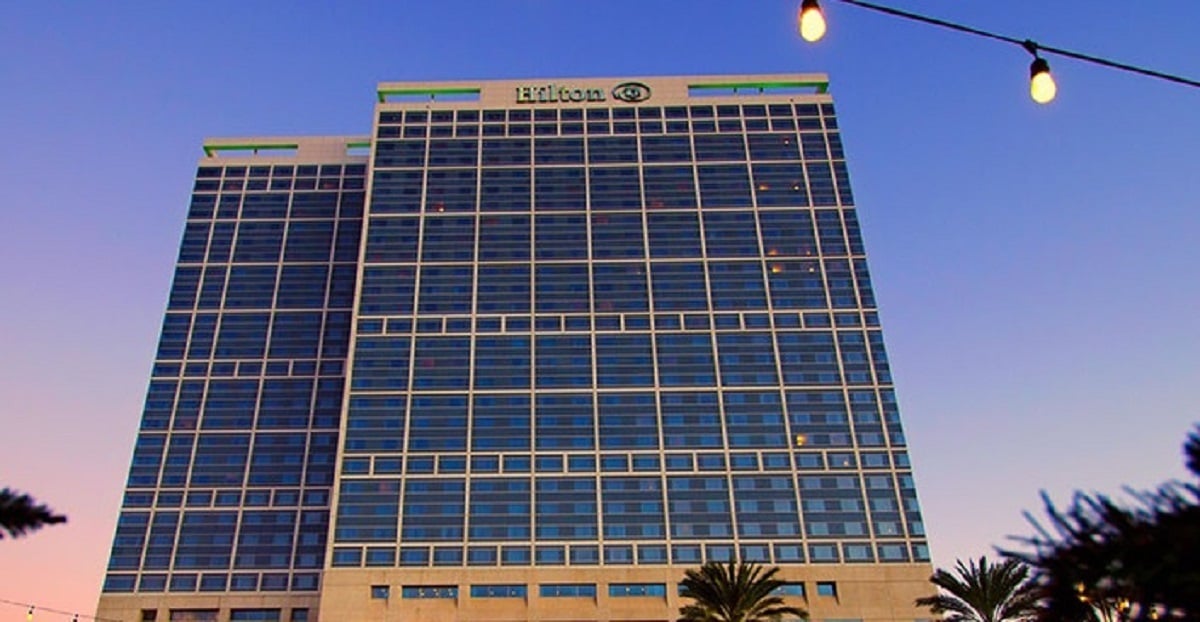 A San Diego man who allegedly defrauded investors out of at least $28 million in a bogus hotel room-discounting scheme “laundered” money through Las Vegas casinos, including ARIA and The Cosmopolitan, according to the FBI.

Denny Bhakta was a manager at the San Diego Hilton Bayfront, pictured, before he allegedly embarked on a wacko $28M Ponzi scheme. (Image: Hotel Business)

Denny Bhakta, 39, was formerly a revenue manager for the Hilton San Diego Bayfront. He was arrested Tuesday and charged with securities fraud and money laundering.

Leaning on his hotel industry background, Bhakta claimed that the companies purchased discounted blocks of hotel rooms from Hilton. They then allegedly sold them to United Airlines for a fat profit, according to court documents.

The feds say Bhakta backed these claims with phony documents, including bank records that appeared to show payments from Fusion to Hilton and fake agreements between Fusion and United Airlines.

According to prosecutors, he told his victims that his “mentor” at Hilton was now a top dog at United Airlines, and he used hard-sell tactics to get his victims to invest.

But it was all smoke and mirrors. Prosecutors say Bhakta spent most of the money on himself. He used around $1.3 million to pay returns to earlier investors, which ticked all the boxes of a Ponzi scheme.

“Because Fusion had little or no business activity, these payments to investors were Ponzi payments made using incoming investor funds,” argues a separate complaint brought by the US Securities & Exchange Commission.

According to the SEC filing, over three days in July 2018, Bhakta wired $1.17 million to an unnamed casino. The Department of Justice has charged him with money laundering. But the investors’ money was clean right up until he  wired it to the casino, and it’s unclear how the transactions were designed to conceal the alleged crime.

The SEC complaint avoids the phrase “money laundering” completely and just alleges he used the funds for “gambling.”

The defendant allegedly spent the last five years making millions of dollars based on false promises supported by fraudulent financial statements and fake business agreements,” said FBI Special Agent in Charge Suzanne Turner. “This case should serve as a warning – the FBI will continue to partner with the [SEC] to root out all forms of investment fraud.”

Acting US Attorney Randy Grossman warned investors to be suspicious of “high-pressure sales tactics, promises of returns that are too good to be true, and always verify the license and legitimacy of the person making the pitch.”