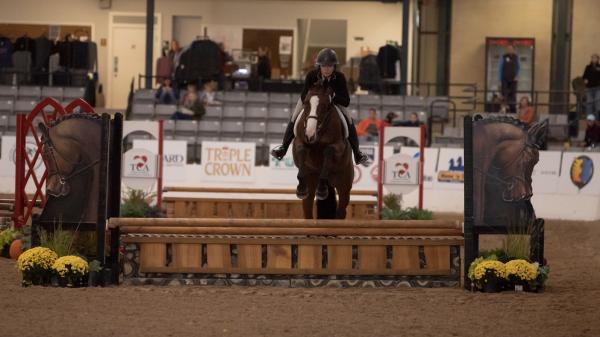 It took two days of preliminary competition and a Saturday filled with nearly 50 horses competing in the 10-discipline Finale at the 2022 Thoroughbred Makeover and National Symposium, but when the dust settled it was She’s a Bold One who took home the title of Thoroughbred Makeover Champion, sponsored by Churchill Downs.

The Thoroughbred Makeover, presented by Thoroughbred Charities of America, was a highlight of a busy – and for equine enthusiasts, enjoyable – several weeks in the heart of horse country also featuring racing at Keeneland and culminating with the 39thBreeders’ Cup in early November.

Never making it to the starting gate but registering works while in race training, She’s a Bold One last breezed on Jan. 12, 2021 before becoming a show horse. Ridden by junior Jenna Denver, the 4-year-old Midshipman daughter showed in Eventing and Dressage at the Thoroughbred Makeover and made the Finale in both.

One of the first to go during Saturday’s finale, She’s a Bold One handled the eventing course she had to tackle with no problems and impressed the judges every step of the way. When scores were tallied, She’s a Bold One earned a 91.375 – just over four points higher than the second placed Financin Our Dream – to qualify for a chance to win the overall championship.

She’s a Bold One came back a few hours later to put down a solid test in the Dressage and nearly take home the Dressage championship as well. In a tightly packed field, a small bobble during the test had her place second by just .25 points behind Buckeye Warrior. The filly’s overall score tied with the third-place horse but the tiebreaker went in her favor.

The title of Thoroughbred Makeover Champion is selected by a panel of judges who watched the whole Finale before ranking each of the champions. After deliberations at the end of the 10 disciplines, they placed She’s a Bold One first among the 10 horses who had taken home championship honors.

“It’s surreal still,” said Denver, who is based Imlay City, Mich. “But I’m so happy. She went straight from Eventing right to Dressage, and she did that very well, and I think that stands out. At home, it’s a balance of dressage and jumping, but I focus on the overall fitness of the horse. I think that’s really important for both disciplines. She’s my first Thoroughbred I’ve trained myself completely – it feels really good, and it’s a really good achievement that I’ve produced my own horse.”

Prince of New York had the difficult task of showing in back-to-back classes at the Finale but handled it like a professional. The stallion won the Show Jumpers division by 17 points before coming back in the Show Hunters after a brief break. Showing his versatility, he scored the second best in the class to finish behind Racing Ace and Amanda Gomez.

“He’s got all the qualities that we look for: he’s a beautiful mover, very pretty to look at, and once we started jumping he really had a good technique,” said rider and owner Chris Bennings. “He seems to really like coming to the horse shows. He’s bred six mares so far, so to come be a green horse and really keep it together and be professional is really exciting.”

If the name Gomez is familiar to you, it’s because Amanda is the daughter of the late Hall of Fame jockey Garrett Gomez. She piloted Racing Ace to a 22-point victory in Show Hunters with the pair barely missing out on the Finale in Show Jumpers as her sixth-place score was just one point behind the fifth-place rider.

“The Makeover has always had a special place in my heart,” she said. “My dad was always very passionate about the aftercare of Thoroughbreds when they came off the track, and obviously it’s something he built into me as well. I came here in 2017 and was super unfamiliar with the whole experience, but my horse back then was incredible as well. I was excited to come back, especially with a quality horse like this which made it even more special.”

The discipline was a hard one for the judges to decide on, with all five Finale riders within 3.25 points of each other at the end. Buckeye Warrior was the leader on a score of 43.750 when all was said and done with the two riders behind him sitting on a 43.500. In the end, a tiebreaker awarded She’s a Bold One the second-place spot over Brave Nation and Sarah Davis.

“I am over the moon, of course! I thought coming in Western, I was giving myself a handicap, but this horse is so special, obviously,” Zecchin said. “I’m an eventer and English dressage rider, but I’ve never ridden this horse in a bit ever since he came off the track. I can do that if I ride Western!”

Supreme Irene proved to be as laid-back as a horse can be when the Wisconsin-bred handled her Freestyle routine without blinking an eye to win the championship in that discipline.

Among the things Supreme Irene had to do during the Wizard Of Oz-themed freestyle was walk into a canopy dressed as a house, help her rider pop balloons, and deal with various Wizard of Oz characters climbing around her – and also handle her rider throwing water at the Wicked Witch when that character walked up to the mare with a smoking item. Supreme Irene didn’t just show in the Makeover over the weekend, she also took advantage of part of The Jockey Club’s Thoroughbred Incentive Program championship being held at the same venue and won that organization’s trail class.

“All of my good friends, we just all got together and brainstormed,” said her rider Monique Cameron. “We also had some people we met here at the Makeover who volunteered to help us! I couldn’t have done it without them – and the owners, they’re amazing owners who supported me through all this. What a versatile, versatile horse, so multitalented. We won the T.I.P. Championship Trail and placed in the Makeover Competitive Trail.”

The Finale ended with the Ranch Work championship going to a pair who have been together since the horse was a yearling when Don’t Ask Kinmon and Alice Beckman won that title.

Beckman herself is a jockey and she not only helped Dont Ask Kinmon transition to his off the track career but also broke him as a yearling as he prepared for his racing career. Beckman and Don’t Ask Kinmon’s relationship continued on the track with Beckman riding him for his final seven races with two victories in that time.

Their record of firsts continued after the track with Beckman also riding him in his first horse show after retiring in October of 2021. The pair not only won Ranch Work but also finished 22nd in Dressage against 103 other horses.

“Honestly, I might be more excited about winning this than when we won our first race together! I don’t know – it’s just special to work hard for almost a year to do something like this, and have our homework pay off,” Beckman said. “I love [ranch work]. It’s going to be a thing from now on. We’ll be doing it some more!”

You can find all the Thoroughbred Makeover champions below courtesy of the Retired Racehorse Project:

Eventing, sponsored by Phoenix Performance Products: She’s A Bold One and Jenna Denver

Show Hunter, sponsored by Beyond the Wire: Racing Ace and Amanda Gomez

Applications for the 2023 Retired Racehorse Project Thoroughbred Makeover open on Jan. 2 and close on Jan. 20. Horses who last raced or worked on or after July 1, 2021 and haven’t had more than 15 second-career training rides as of Dec. 1, 2022 are eligible to compete in the event taking place in October 2023 at the Kentucky Horse Park.

Learn more about the Retired Racehorse Project and the Thoroughbred Makeover at https://www.therrp.org.