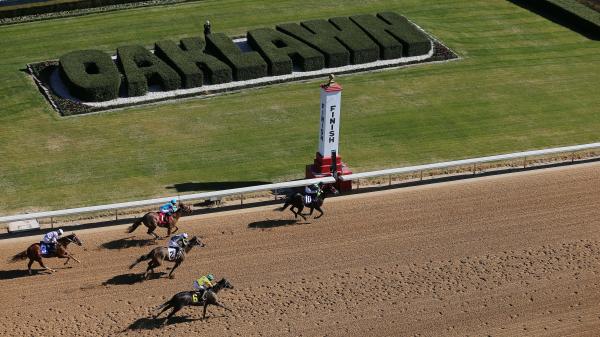 In a monumental schedule change, Oaklawn Park’s 118th season opens Friday, adding December race dates to the calendar for the first time in the track’s history. The 66-day meet will be conducted largely on a Friday-Sunday basis and will conclude Sunday, May 8.

“I love it,” said Hall of Famer Steve Asmussen, an 11-time Oaklawn leading trainer. “The more Oaklawn, the better.”

Oaklawn will stage its first 2-year-old stakes since 1973: the Advent Stakes on opening day. The new schedule includes five new stakes — including the also festively-named Mistletoe, Poinsettia, and Tinsel Stakes — for a total of 36 stakes worth $12.3 million. The meet will be the richest in the track’s history, offering between $45 million and $50 million.

The crowning point of the meet is the Grade 1 Arkansas Derby, which received two major changes. The purse was boosted to $1.25 million, making it the richest event among 2022 Kentucky Derby Presented by Woodford Reserve preps, and the date is Saturday, April 2.

The date shift is a departure from its traditional three weeks before the Kentucky Derby and will give participants five weeks between the Arkansas Derby and the first jewel of the Triple Crown.

The new positioning of the Arkansas Derby on the racing calendar made a ripple effect on Oaklawn’s other major 3-year-old races. The $1 million Rebel Stakes will be run on Saturday, Feb. 26. The $750,000 Southwest Stakes will be run Saturday, Jan. 29. The Smarty Jones Stakes will kick off the series on New Year’s Day with a purse that has been increased to $250,000.

In addition to the Arkansas Derby and the Rebel, two other stakes will carry million-dollar purses: The Grade 2 Oaklawn Handicap and the Grade 1 Apple Blossom, which will both be run April 23.

“Our slogan has been ‘A New Level of Racing’ the last few years and that’s exactly what we intend to deliver,” Oaklawn President Louis Cella said. “Our purses will be among the highest in the country between December and May, and the entertainment value we offer will be second to none. Our luxury hotel, spa, and event center are fully open. The excitement heading into our live season has never been greater.”

Oaklawn has also changed the name of Count Fleet barn, which was Whitmore’s winter home for six years, to the Whitmore barn. Whitmore is in training to possibly become a stable pony for Moquett, and Moquett hopes he will be able to lead the post parade for the Whitmore Stakes.

“Oaklawn has always been my home track and it was Whitmore’s home track, so it’s a huge honor to have a stakes race named for him here,” Moquett said. “He was a hard-knocking horse that a lot of people could easily root for whether they put a bet on him or not. The amount of support we have received since his retirement has been overwhelming.”