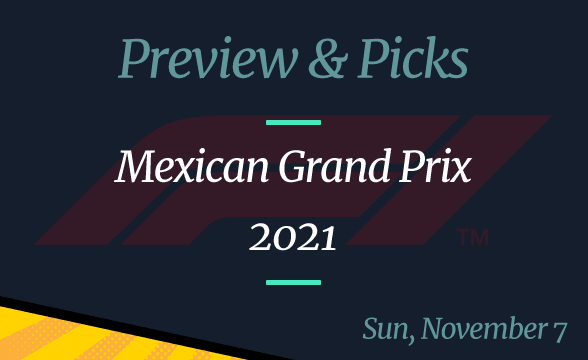 This Sunday will bring us the next installment in the never-ending battle between Max Verstappen and Lewis Hamilton. Although, this time around, the Mexican Grand Prix will be contested by a third capable driver, with Sergio Perez posted at +1400 as the underdog to upset the perennial chase between the two leaders.

Verstappen is given a solid chance at winning here at (-175) with Hamilton trailing him at (+200). The United States GP wasn’t kind to the British racer who has not been able to win many races on US soil and this may extend down south. He still drove in a second behind Verstappen across the finish line, leaving Perez way behind with +42.223s.

The Autódromo Hermanos Rodríguez in Mexico City promises another neck-and-neck race and it would be good to see a different drive come in between Verstappen and Hamilton and leave them in the dust.

There is only a split-second separating Hamilton and Verstappen in virtually every race of the circuit this season. Yet, Verstappen has been able to consistently outdo the British driver. The 24-year-old took a few seasons to adapt and excel but he is finally doing it and Verstappen has finished second or first in 13 out of his 15 races making him a strong contender for a win in Mexico.

Not only that but the driver is once again tipped in the odds as he still leads ahead of Hamilton by 10 points and seems to be able to retain that lead even if he ends up second in the Mexican GP. However, Verstappen is not looking to lose in the long term here. Both drivers are a little on edge, and their team members have not ruled out a car crash between the two to which Hamilton responded that he “wanted to win the right way.”

Even though Hamilton was the one to win the most recent edition in 2019, Verstappen is the winner of two back-to-back races, overcoming Hamilton with 17.316s in 2018 and 19.678s in 2017. Given that his overall form is much better today than it was in 2018 or 2017, it’s understandable why oddsmakers feel confident that the Dutch racer can repeat his previous success.

We are definitely seeing the value in betting on Max Verstappen here at (-175). Of course, Hamilton is always a possible winner here as well, and there are perhaps a few wild cards to keep an eye out for.

Charles Leclerc and Sergio Perez are posted at (+1800) and (+1400) respectively and they are also another pair of promising drivers. Granted, they are FAR behind Hamilton and Verstappen when it comes to overall performance. Still, they have posted consistent performance and if there is anyone who has a chance of upsetting the top dogs, that’s either one of them.