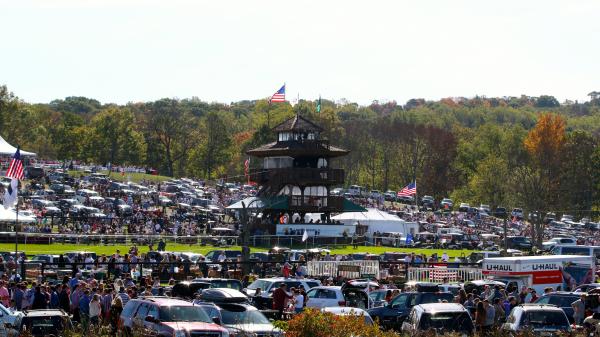 Far Hills Ready for ‘Championship Day for Steeplechasing’ on Saturday

There’s a good chance the largest crowd in the country for a Saturday afternoon of Thoroughbred racing on Oct. 15 will be found in New Jersey. There’s even better odds that it will be the most festive and exciting spot as well.

Welcome to the 101st Far Hills Race Meeting, a single-day event that has attracted crowds upward of 40,000 to New Jersey for steeplechase racing’s premier day that colorfully showcases all of the sport’s thrills and splendor.

A collection of nearly 50 of steeplechasing’s best international equine athletes will be on hand Saturday in a bucolic borough of Somerset County, N.J., that has just 924 residents and 10-acre zoning, competing in six steeplechase races plus one flat stakes that carry a combined value of $625,000, highlighted by the renowned $250,000 Grand National Steeplechase.

“We have whatever you are looking for in terms of fun and entertainment. It’s by far the biggest day and biggest purse structure for steeplechase racing and it’s known as the championship day for steeplechasing,” said Guy Torsilieri, chairman of the Far Hills Race Meeting. “It’s a tremendous mix of a plethora of things. We will have between 25,000 and 45,000 people in attendance, mixing corporate tents and fans who will be coming to watch and enjoy the races while meeting old friends and making new acquaintances.”

Aside from the nationally televised races, the scene at Far Hills is akin to gameday at one of college football’s leading programs with avid fans crowding the grounds and tailgating on a massive scale, but with a more refined menu of wine and cheese and picnic baskets subbing for kegs, grills, and burgers.

There may not be a grandstand for the merry, day-long party, but the oval is lined with hospitality tents and parking spots that supply up-close views of the marathon tests of agility and stamina from ideal locations for eating, drinking, and enjoying the day to the fullest with family and friends.

“We have so many loyal fans who have been coming for years and having a great time,” Torsilieri said. “Parking passes for tailgating are so coveted that they are passed down from one generation of fans to another. We have people telling us how they came with their grandfather and they are now taking their grandchildren.”

The Grade 1 Grand National, the centerpiece of six stakes on a card sponsored by Peapack-Gladstone Bank and Open Road Auto Group, attracted a field of nine, including a few with European roots, for the demanding 2 5/8-mile test that has a list of past winners that reads like a who’s who of steeplechase racing. Five-time winner McDynamo, Lonesome Glory, Highland Bud, and Morley Street are among the famed jumpers who ably handled all of the obstacles in front of them in a race that once served as the Breeders’ Cup Steeplechase for several years.

“Before the pandemic, we were close to a million dollars in purse money. The Grand National was worth $450,000 and we were cruising along but then COVID really hurt us in 2020 when we couldn’t race,” Torsilieri said.

Bruton Street-US’ Snap Decision, who settled for second after a memorable duel with The Mean Queen in last year’s Grand National, heads the American contingent. The 8-year-old Hard Spun gelding, the only one of the nine starters bred in the United States, has won 13 of 36 starts with earnings of $849,334 for trainer Jack Fisher.

Already a winner of two Grade 1 jump races in 2022, Snap Decision went down to a defeat that weighed heavily on him last time out. Carrying 168 pounds, 18 more than anyone else, he finished second in the Grade 1 Lonesome Glory Handicap at Aqueduct and nine lengths behind 41-1 winner Noah And The Ark. In Saturday’s rematch with Keystone Thoroughbreds’ Vinnie Roe gelding, Snap Decision and all of the nine jumpers will carry level weights of 156 pounds.

The field also includes Ask Paddington, who was third in the Lonesome Glory, three-quarters of a length behind Snap Decision, and Song for Someone, who was another nose back in fourth.

Europeans have won two of the last three editions of the Grand National and will be well-represented Saturday with the likes of Hewick, winner of the bet365 Gold Cup Handicap Chase and Tote Galway Plate; Johnny Henderson Grand Annual Challenge Handicap Chase winner Global Citizen; and the Group 2-placed Belfast Banter, who was seventh in the Lonesome Glory in his second U.S. start.

Aside from four other steeplechase stakes and the $50,000 Sport of Kings Maiden Hurdle Run in Memory of John von Stade  (the co-chairman of the Far Hills for 50 years who passed away in November at the age of 83), Saturday’s card features something new to the mix: a $100,000 flat stakes on turf.

Named for the late John Forbes, a highly successful and respected trainer on the New Jersey circuit and long-time president of the New Jersey Thoroughbred Horsemen’s Association, which manages Monmouth Park, the lone race without hurdles is a two-mile test on grass that attracted an overflow field of 18.

Funding for the new race was evenly divided by Far Hills and Monmouth Park, which allocates one of its fall race dates to the steeplechase track for the card.

“They called us and asked if we would kick in some money for a non-steeplechase race and we thought it was a good way to honor the memory of John,” said Dennis Drazin, the CEO and president of Monmouth Park. “We value the relationship with Far Hills. They are a pleasure to work with. They put on a festive day of racing for fans in the high-end areas or anywhere else. We’re hoping to build on the relationship.”

Adding to the festivities of the afternoon, for a second straight year the Far Hills races will be aired along with the New York Racing Association card on “America’s Day at the Races.” After a promising initial year of coverage from Far Hills, the show’s producers are devoting more resources to this year’s broadcast, starting with an increase in on-site talent from one a year ago to the trio of Acacia Clement, Richard Migliore, and Joe Clancy for Saturday’s show.

“We covered Far Hills for the first time last year and it worked out very well,” said Eric Donovan, NYRA’s senior director of TV broadcast operations. “It’s a great day of racing with a great atmosphere. Including these races in our show is part of our desire to present the best races to our audience.”

“America’s Day at the Races” will air Saturday from 12:30 p.m. until 5:30 p.m. on FS2, unless there is no Game 4 between the Philadelphia Phillies and Atlanta Braves in the National League Division Series. In the event the Phillies sweep the series in three games, the show will be presented on FS1.

The card, which begins at 12:50 p.m., will also feature a full array of pari-mutuel wagering on the races, including a 20-cent Pick Six and a 50-cent Pick 5, though on-track betting will be limited to mobile and online outlets.

While Torsilieri said the races will be contested “rain or shine” on Saturday, weather services are calling for a mostly sunny day with temperatures in the upper 60’s and only a 2% chance of rain.

Like that forecast, Torsilieri’s association with Far Hills has brought several decades worth of sunshine into his life.

A longtime fan of horse racing, he and his business partner and fellow Far Hills chairman Ron Kennedy operate a landscaping company that handles the shipping of the Rockefeller Center Christmas tree to its Manhattan, N.Y., home for the holidays.

He started working at Far Hills in 1979 with the humble task of cutting grass and mucking stalls. As his business took off, he became involved in ownership through his Coppertree Farm, winning the 2001 Grand National with Quel Senor.

About 25 years ago, he was named a chairman of Far Hills and has played a key role in turning the day into a box office bonanza while generating about $20 million for six local charities over the years. In the course of all that time, Torsilieri has received supreme satisfaction from watching a single day of steeplechase racing in north New Jersey soar to new heights in terms of its popularity, prestige, and, as most fans will tell you, fun for everyone.

“It’s a great day of racing,” he said, “and we pride ourselves into growing it into one of the best days of steeplechase racing you’ll find anywhere and we’re pretty close to doing that, if we’re not there already.”