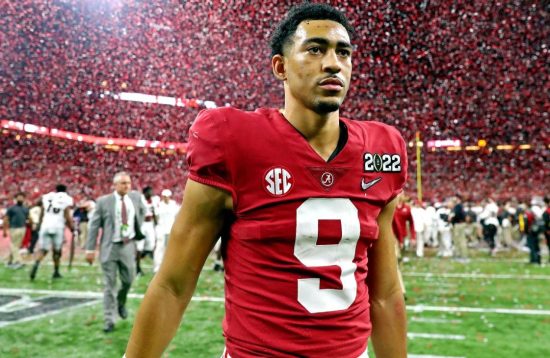 It’s almost hard to believe but the new college football season is less than 90 days away. It comes as no surprise as to the teams sitting at the top of the favorites betting board. The SEC is well-represented once again and several of the usual suspects are among the programs favored to hoist the College Football Playoff at the end of the 2022 season.

Are there any programs out there that could surprise the field? Last year, remember it was Group of 5 Cincinnati that went unbeaten and wound up in the CFP. Who could it be in 2022?

It never gets old for Nick Saban and his Crimson Tide. Saban’s program has been a fixture at the top of betting boards at the beginning of a new college football season for the past decade-plus. The head coach welcomes back the reigning Heisman Trophy winner in QB Bryce Young. Young threw for 4,872 yards and 47 touchdowns last year on an offense that averaged 40 points per game.

Will Anderson Jr. returns to the Tide defense and could be the No. 1 pick in next year’s NFL draft. Saban will simply reload on defense and other key positions and Alabama will once again be the preseason favorite to win the CFP. The Tide is listed at +200 to claim a seventh national title since 2009.

Can QB Stetson Bennett bring the Bulldogs another title?

Since Kirby Smart took over the Bulldogs program in 2016, Georgia is 66-15. The Bulldogs won last year’s CFP national championship. Their only loss last year – 14-1 overall – came in the SEC championship game to their nemesis, Alabama.

Georgia’s defense lost five players to the first round of the 2022 NFL draft. That’s not an issue for Smart as he, like his former mentor Saban, will simply reload. The Bulldogs will have QB Stetson Bennett back to run the offense. Georgia is give +350 odds to capture a second consecutive national title.

The SEC with Alabama and Georgia get plenty of hype, but don’t forget what Ryan Day is doing in Columbus. The Buckeyes went 10-2 last year and won the Rose Bowl. Day and the 2021 Buckeyes lost in the championship game to Alabama.

Quarterback C.J. Stroud is one of the best in the nation and he will once again be among the finalists for the Heisman Trophy. He finished fourth last year in the Heisman voting. Stroud is actually the preseason favorite to capture the award in 2022 after throwing for 4,435 yards and 44 touchdowns last season. Ohio State is listed at +500 to win it all.

The Tigers have played in four CFP title games in the last decade, but started slowly last year. D.J. Uiagalelei was in his first full season as a starter and it took some time for him and the offense to get going.

Clemson won its final six games of the season and finished 10-3 with another bowl victory. The defense should be outstanding again and that’s why the Tigers are given +900 odds to win the CFP at most online sportsbooks. Is this the year where the kid lives up to his potential? We think that is most likely going to happen.

The list of sleepers isn’t very long, but Texas A&M (+1600) did beat Alabama last season and Jimbo Fisher did have one of the nation’s best recruiting classes last year. Playing in the SEC West is difficult, but if the Aggies can figure out their quarterback situation they will have a shot.

Another interesting development is USC. The Trojans will have a new head coach in Lincoln Riley who won 55 of his 65 games at Oklahoma. He will have his quarterback, Caleb Williams, from a year ago and a number of other plug-and-play transfers. At the top online sportsbooks, USC is also given +1600 odds to win the CFP. No other program has odds better than +3300 (Wisconsin).