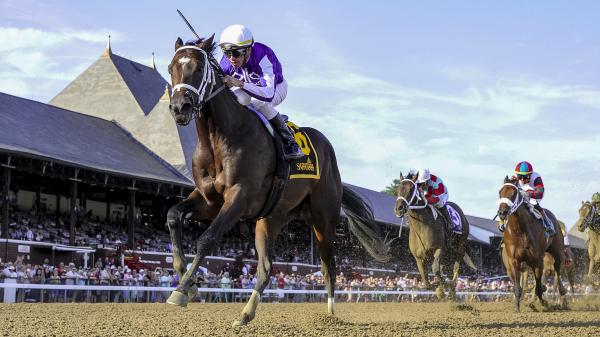 DOMINANT IN THE DIANA: Chad Brown captured the Grade 1 Diana for the sixth time in seven years — and he did it in style. Brown trainees secured the top four positions led by front-running In Italian, who set a course record of 1:45.06 for the 1 1/8-mile contest while holding off stablemate Technical Analysis by 1 ¼ lengths. Bleecker Street took third with Rougir fourth. “It’s just another memorable accomplishment for our team and a wonderful day at the races for a lot of friends and family,” said Brown, who is from nearby Mechanicville, N.Y. The superb turf trainer is eyeing the Oct. 8 First Lady Stakes at Keeneland as a possibility for In Italian’s next start. That race has added appeal this year because Keeneland will host the Breeders’ Cup World Championships on Nov. 4-5.

CHANGING COURSE: Brown will use the July 30 Jim Dandy Stakes to prep Early Voting for the Aug. 27 Runhappy Travers Stakes rather than stick to his original plan of having the Preakness winner compete in the July 23 TVG.com Haskell Stakes at Monmouth Park. Either way, Early Voting would encounter a formidable stablemate. In the Jim Dandy, he will oppose third-place Kentucky Derby Presented by Woodford Reserve finisher Zandon but he avoids rising star Jack Christopher, who features a tremendously high cruising speed, in the Haskell. “I just didn’t see the benefit of putting Early Voting in a larger field against a really fast horse and what it might do to him five weeks out from the Travers,” Brown said.

AUSPICIOUS START: Mo Strike showed he belongs on the list of the nation’s most promising 2-year-olds when he scored an authoritative 3 ½-length victory in the $175,000 Sanford Stakes at Saratoga. The Grade 3 race was only his second start after he debuted with an impressive win in a 5 ½-furlong sprint June 19 at Churchill Downs. “I’m excited about him and for his future,” trainer Brad Cox said. “I think he’s one of the top 2-year-olds in the country and, if he can move forward, he’ll stay in the top tier.” An acid test awaits with the son of Uncle Mo remaining in upstate New York to prepare for the Sept. 5 Hopeful Stakes.

CORNICHE COMEBACK: Champion 2-year-old Corniche, a Quality Road colt previously trained by Bob Baffert, is poised to make his season debut in the July 31 Amsterdam Stakes at Saratoga for new conditioner Todd Pletcher. Corniche has worked six times for Pletcher, with the most recent of those a five-furlong drill he completed in 1:01.44. “We’re considering the Amsterdam, which interestingly enough was the first race for Quality Road when we had him,” Pletcher noted. “You can see a lot of Quality Road in him and he’s put in some good work. If things go well next week, that’s probably where we’ll end up.”

ON THE MOVE: Jockey Sonny Leon, 32, eager to capitalize on a masterful ride that allowed 80.80-1 Rich Strike to pull a stunning Kentucky Derby Presented by Woodford Reserve upset, left the Ohio-Northern Kentucky circuit to ride full-time at Florida’s Gulfstream Park. He needed only two mounts at Gulfstream on Saturday to reach the winner’s circle, producing a ground-saving trip that got the job done aboard She’s Classy for trainer Jose D’Angelo in a five-furlong sprint on the Tapeta Footing synthetic surface. Leon initially rode at Gulfstream in 2015 after leaving his native Venezuela but left there when business soured. His new-found fame should create considerably more opportunity this time around.

2022-07-18
Previous Post: Play’n GO Enters the US Market as It Receives a B2B License in Michigan
Next Post: Mayhem at the WSOP after Reports of an Active Shooter on the Las Vegas Strip