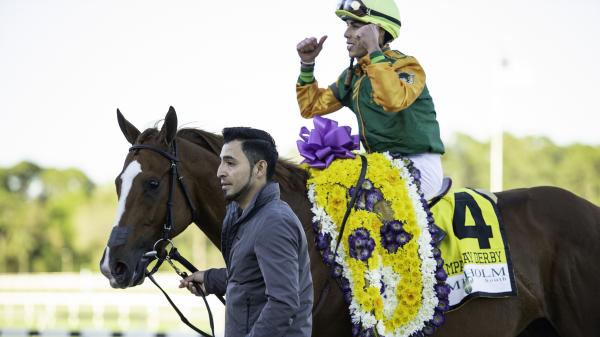 LOOKING GOOD: Jockey Irad Ortiz Jr. was encouraged by Classic Causeway’s front-running 2 ½-length victory in the Lambholm South Tampa Bay Derby, believing his colt showed evidence that the Kentucky Derby’s classic mile-and-a-quarter distance will be within reach. “Getting close to the wire, he was looking around a little bit,” Ortiz said. “But I feel I had a lot more horse. He’s acting like he can carry his speed more. These last couple of races, he’s been acting after the wire that he still has more left. I don’t want to jinx it, but I think there is something more there.” Classic Causeway, trained by Brian Lynch, advanced to the top of the Road to the Kentucky Derby Leaderboard with 66 points, two more than Epicenter.

CRITICAL CHANGE: The Arkansas Derby was held three weeks ahead of the Kentucky Derby from 1996 to 2021. Oaklawn Park management decided to push the race to five weeks ahead of the run for the roses when this year’s schedule was set, probably never imagining that it would help them attract a star filly. Legendary trainer D. Wayne Lukas cited the schedule change in announcing that Secret Oath, bred and owned by Robert and Stacy Mitchell, would oppose males when the $1.25 million Arkansas Derby is contested April 2. As for the Kentucky Derby Presented by Woodford Reserve, Lukas said, “We have no plan to run in the Derby now. That’s not chiseled in stone, either, but that’s the way the Mitchells feel. They don’t want to run in a 20-horse field. They feel like the Oaks is every bit as prestigious.”

SHARP WORK: Authoritative Holy Bull Stakes winner White Abarrio appears to be in excellent form as the April 2 Curlin Florida Derby begins to come into view. He produced a bullet five-furlong workout in 59.49 seconds with Tyler Gaffalione aboard on Sunday at Gulfstream Park, swiftest of 15 workers at the distance. “Since the Holy Bull, he’s shown everything you want a horse to show,” trainer Saffie Joseph Jr. said. “He’s going in the right direction, how you would want a 3-year-old to go at this time of year.” White Abarrio controlled the Holy Bull by 4 ½ lengths in turning back Simplification, who went on to capture the March 5 Fasig-Tipton Fountain of Youth Stakes. The Race Day colt is expected to work five furlongs in company next Sunday.

STILL GOT IT: Champion sprinter Ce Ce displayed a big heart to accompany her abundant speed when she turned back Pauline’s Pearl and third-place finisher Shedaresthedevil to win the $350,000 Azeri Stakes on Saturday at Oaklawn for trainer Michael McCarthy and jockey Victor Espinoza. “Coming to the sixteenth pole, I saw her ears go up and wasn’t sure if she was getting tired or what,” McCarthy said. “When those two other fillies came to her, she dug back in and showed what a champion she is.” Ce Ce, who closed last season with a rousing victory in the Breeders’ Cup Filly and Mare Sprint, won for the ninth time in 18 career starts. She lifted her earnings beyond the $2 million mark.

TAKIN’ IT EASY: Hronis Racing and trainer John Sadler hope to keep the pressure off Edgeway as much as possible as they start on a path that they hope will lead to a reversal of fortune for the runner-up to Ce Ce in last year’s Filly and Mare Sprint. That was reflected in their decision to run in the $100,000 Las Flores Stakes on Sunday at Santa Anita, a race she dominated by seven lengths. “The focus with her is the fall. We want to get her back to the Breeders’ Cup,” said Kosta Hronis of his 5-year-old mare. “So, staying home, not doing a lot of traveling with her until we have to, is how we’ll approach it.” According to Hronis, they will wait to see how she comes out of the Las Flores before deciding on her next start on the road to the Breeders’ Cup World Championships at Keeneland Race Course.