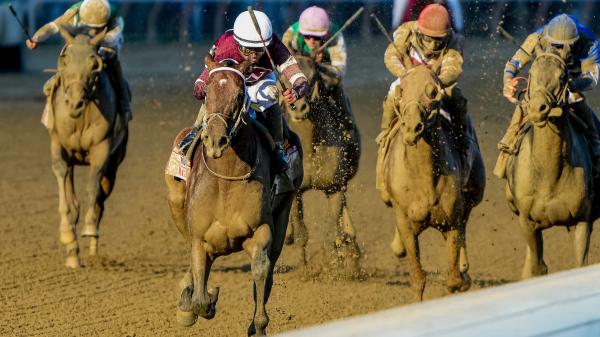 CLASS LEADER: Hall of Fame trainer Steve Asmussen correctly said that Epicenter needed to win the Travers more than any other horse in the balanced 3-year-old division. His colt had run second in the Kentucky Derby Presented by Woodford Reserve and Preakness Stakes. The lack of a Grade 1 triumph represented a gaping hole on his resume. Epicenter, confidently ridden by Joel Rosario, undoubtedly surged to the head of his class with a commanding 5 ¼-length margin against two-time Grade 1 winner Cyberknife in the “Mid-Summer Derby.” “I thought that answered a lot of questions,” Asmussen said of the outcome. “His resume looks very good and we’re willing to run against them again.”

ENCOURAGING FINISH: Rich Strike, who produced one of the great upsets in Kentucky Derby history when he delivered at 80.80-1, was largely dismissed as a one-hit wonder after he ran sixth in the Belmont Stakes Presented by NYRA Bets, 13 1/4 lengths in arrears of Mo Donegal. His fourth-place effort in a deep eight-horse Travers field suggests he should not be overlooked so quickly, considering he had not raced since the June 11 Belmont. “He was doing really well. He just got a little bit tired in the last 50 yards. He did a good job coming back after the layoff,” jockey Sonny Leon said of quirky Rich Strike, adding, “Mentally, he’s growing up.”

STUNNING UPSET: Prohibitive favorite Jackie’s Warrior, the 2021 champion sprinter making his final start at Saratoga, lost for the first time in six races at the iconic track when late-running Cody’s Wish overtook him in the $600,000 Grade 1 Forego Stakes. Asmussen took the upset in stride. “Only just a little sad that was his last time to run here at Saratoga because he’s brought us so much fun and joy here,” Asmussen said of the 4-year-old. “He’ll be sharp for the Breeders’ Cup Sprint. That will be his next and last start.” The son of Maclean’s Music will retire to Spendthrift Farm as the only horse in Saratoga’s 154-year history to win a Grade 1 race for three consecutive years, taking the 2020 Runhappy Hopeful Stakes, 2021 H. Allen Jerkens Memorial Stakes, and 2022 Alfred G. Vanderbilt Handicap.

TURNING BACK: Jack Christopher’s first attempt at a mile and an eighth proved to be one furlong too many when he weakened to be third in the July 23 TVG.com Haskell Stakes at Monmouth Park, his lone defeat in five career starts. That led trainer Chad Brown to point him toward the seven-furlong H. Allen Jerkens Memorial Stakes – and that was the perfect direction. The 3-year-old Munnings colt, with Jose Ortiz aboard, returned to his winning ways with a 1 ¼-length decision against Gunite. “Four weeks [rest] and he ran huge,” Ortiz said. “He gave me everything he had and a very good race.” Brown said he is undecided about what race should be next for his speedster.

MAJOR BREAKTHROUGH: Laurel River, a 4-year-old Juddmonte homebred making only his seventh lifetime start, had never won a stakes race entering Saturday’s seven-furlong Pat O’Brien Stakes on Saturday at Del Mar. He picked an opportune time to register his stakes breakthrough, splitting horses at the quarter-pole for a rousing victory that brought an automatic, fees-paid berth in the Big Ass Fans Breeders’ Cup Dirt Mile. Hall of Fame trainer Bob Baffert achieved his 150th stakes win at the picturesque track to extend a record that may never be equaled. The huge question is whether Laurel River, sired by Into Mischief, can handle an extra furlong in the Dirt Mile on Nov. 5 at Keeneland. “He can go the mile. I think so, for sure,” said winning jockey Juan Hernandez.

2022-08-28
Previous Post: What I Would Tell My Younger Poker Self
Next Post: Maryland Lottery approves DraftKings’ application for a retail sportsbook at Timonium Racetrack