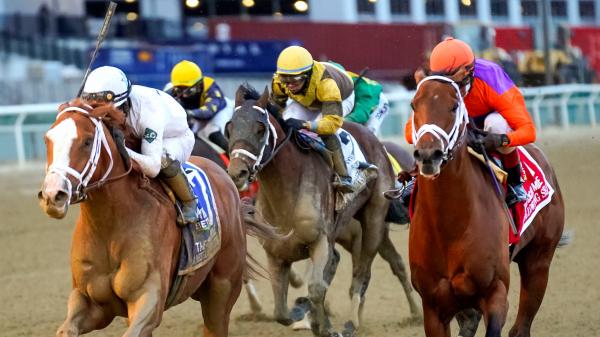 Five Takeaways You Need to Know from Cigar Mile Weekend

HUGE DAY: Trainer Todd Pletcher is no stranger to big days in New York. He outdid himself on Saturday at Aqueduct, sweeping the Cigar Mile with Americanrevolution, the $250,000 Remsen Stakes with Mo Donegal, and the $250,000 Demoiselle Stakes with Nest. Interestingly, he needed to survive objections in all three races. When Americanrevolution rallied to overtake stablemate Following Sea in the Cigar, it represented Pletcher’s his fifth Cigar Mile score and his second one-two finish after Left Bank and Graeme Hall in 2001. “We felt we had some horses that were training the way you would want them to be training leading up to a big race,” Pletcher said. “We were excited about the day coming in, and it was one of those rare occasions where everything fell into place and everyone ran their race.

FUTURE STAR: New York-bred Americanrevolution closed his 3-year-old season with a flourish with a half-length victory in the Cigar Mile, and he shows every sign that he will belong among the nation’s leading older horses in 2022. He was extremely responsive to Luis Saez’s vigorous handling to collar stablemate Following Sea late in the Cigar. Another impressive element was his ability to handle a cutback in distance. His previous three starts, including a third-place finish in the Pennsylvania Derby, had been at a mile and an eighth. “We weren’t 100% positive about the mile, but a lot of times good horses do multiple things really well. I think he’s a great example of that,” winning trainer Todd Pletcher said. “Constitution puts so much determination into his offspring and they are just like he was – very tough horses and versatile. It’s great to see him get that Grade 1 win.” Pletcher won the 2014 Florida Derby with Constitution. Americanrevolution prevailed for the fifth time in seven starts while hiking his career earnings to $944,535.

EXCITING JUVENILES: Pletcher has two exciting juveniles in Mo Donegal, who earned his first 10 points on the Road to the Kentucky Derby by winning the Remsen, and in Nest, who earned her first 10 points on the Road to the Longines Kentucky Oaks by capturing the Demoiselle. Both were ridden by Irad Ortiz Jr. Plans call for them to join Pletcher’s string in South Florida. They will be given a freshening before Derby preps start to come into focus. Pletcher raised the possibility that Mo Donegal, a son of Uncle Mo, might return to New York to run in one or more preps at Aqueduct. Although distance is typically a question with young horses, it will not be with Nest. The daughter of two-time Horse of the Year Curlin showed every sign that she will relish additional ground when she made a winning debut at 1 1/16 miles at Belmont Park on Sept. 25.

RARIN’ TO GO: Longines Breeders’ Cup Classic winner and de facto Horse of the Year Knicks Go began preparations for his career finale in the Jan. 29 Pegasus World Cup Invitational by blazing three furlongs in 36.20 seconds on Saturday at Churchill Downs. “Well in hand. He definitely hasn’t regressed since the Breeders’ Cup. He’s been training extremely well, galloping great, wanting to do more,” said trainer Brad Cox. “You could definitely tell the last week, 10 days, he was wanting to do more. He was very strong throughout this morning, around both turns and even up the backside [afterward].” Cox added: “He seems to be the same Knicks Go we saw before the Classic.” The $3 million Pegasus at Gulfstream Park is expected to feature a highly-anticipated showdown between Knicks Go and authoritative Big Ass Fans Breeders’ Cup Dirt Mile victor Life Is Good. Both possess a world of speed, which should make for a fascinating confrontation.

FULL STEAM AHEAD: Jon Court added spice to Oaklawn Park’s opening weekend by becoming the sixth jockey to register 700 wins at the Hot Springs, Ark., track. Court, 61, achieved the milestone aboard Unbridled Twister in the fifth race last Friday. He reached the Oaklawn winner’s circle for the first time in 1981. “It’s always been fun and there’s a lot of energy and excitement,” Court said of competing at Oaklawn. “I’m just enjoying the journey.” The 700-win club is comprised of Pat Day, the late Larry Snyder, Calvin Borel, John Lively, Tim Doocey, and now Court, who shows no interest in resting on his laurels. “Full steam ahead,” he said when asked about the possibility of retirement. Day reigns as Oaklawn’s all-time leading rider with 1,264 victories there.