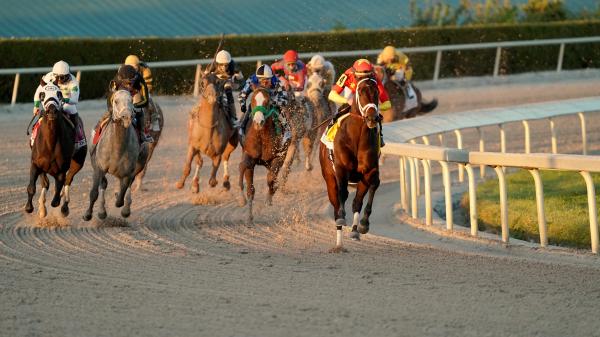 NEXT MOVE: WinStar Farm and CHC Inc. had been targeting the $12 million Dubai World Cup on March 26 at Meydan Racecourse for Life Is Good’s next start if all went well in the Pegasus World Cup Invitational presented by 1/ST BET. Everything could not have gone better with a convincing victory over Knicks Go in the $3 million World Cup and, according to trainer Todd Pletcher, the 4-year-old Into Mischief colt came out of the race well. Still, there now seems to be some uncertainty about what the next move should be with the Big Ass Fans Breeders’ Cup Dirt Mile winner. “It’s a long way to travel and a long way to come back. Historically, horses need a little bit of time once they get back,” Pletcher said. “If you’re successful over there, it’s certainly worth it. But there is some risk involved. That will be part of the discussions that we will have.” He wants to be sure to take some time before making a decision. “There is no urgency to deciding right away,” he said. “We’ll get him back to the track and see how he trains and come up with a plan, probably in the next couple of weeks.”

HUGE DAY: Pletcher became the first trainer to sweep the $3 million Pegasus World Cup and and the $1 million Pegasus World Cup Turf Invitational Presented by Baccarat when Life Is Good dominated the marquee race less than an hour after Colonel Liam repeated in the Turf. Irad Ortiz Jr. was aboard for both winners. The double was particularly impressive because Colonel Liam was coming off a massive layoff. He had not competed in a race since the June 5 Resorts World Casino Manhattan Stakes, a $750,000 race at Belmont Park. “Everything happened just like we wanted it to. We got on a good schedule and got some good works into him,” Pletcher said. “Thankfully, he was ready enough to do it again. It’s great when you see a horse come back off a layoff and run that well.”

TOUGH CALL: It will not be an obvious decision when voters are asked to consider Knicks Go for the National Museum of Racing’s Hall of Fame in Saratoga Springs, N.Y. A victory against Life Is Good surely would have helped his case, but he never threatened him in finishing 3 1/4 lengths behind in second. Still, there are many elements to commend Knicks Go. He notched a pair of Breeders’ Cup victories in the Dirt Mile and the 2021 Longines Classic to go with other Grade 1 victories in the 2021 Whitney Stakes and Pegasus World Cup. Horse of the Year accolades are surely headed his way when Eclipse Awards are presented Feb. 10 at Santa Anita. But an empty 3-year-old campaign in which he went winless in eight starts looms as a large negative as does the disappointing performance in his career finale.

RIGHT MOVE: Steve Moger made a winning move when he landed Stilleto’s Boy with an online bid of $420,000 at the Fasig-Tipton July selected horses of racing age sale last summer. The gelded son of 2011 Preakness winner Shackleford had just won the $250,000 Iowa Derby. With Steve’s brother, Ed, taking over training duties, Stilleto’s Boy already has generated $583,500 in six starts for his new connections. The biggest payday was his latest, when he ran a solid third in the Pegasus World Cup to bring home a $292,500 check. He benefitted from an excellent ride by Jose Ortiz, a late replacement for Kent Desormeaux. “I tried to save every inch of ground that I could. I was very close to the rail the whole time,” Ortiz said. “I thought my horse ran a huge race.”

FIFTH BEST: Trainer Mark Casse was counting on Knicks Go and Life Is Good engaging in a taxing speed duel when he decided to enter late-running 2019 Belmont Stakes winner Sir Winston in the Pegasus World Cup. It was a huge blow to his hopes when fast-starting Life Is Good had everything his way. To make matters worse, the 1 1/8-mile distance did not give Sir Winston enough time to unleash his closing kick. He was forced to settle for fifth in a field of nine. “He needs a mile and a half,” said Casse. “[Jockey Edwin Gonzalez] thought he was just getting going.” Casse does not have another race selected for his veteran marathoner. Rest assured, he will be looking for distance, the longer the better.