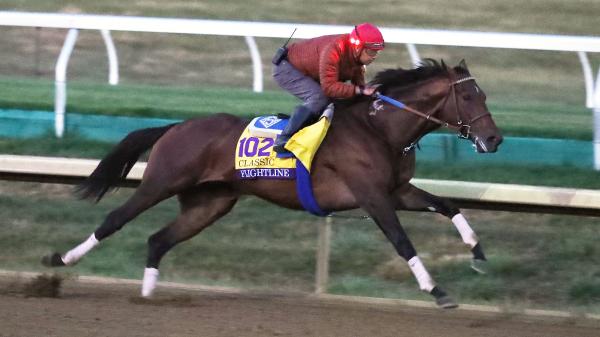 Eight of the best dirt runners in the world were entered Oct. 31 in the $6 million Longines Breeders’ Cup Classic, but two stand out above the rest: the undefeated odds-on morning-line favorite Flightline and his top challenger Life Is Good.

Or better yet, Flightline vs. Life Is Good.

Without question, the race within the Nov. 5 race at Keeneland Race Course between the two ultra-fast multiple Grade 1-winning 4-year-olds promises to be a highlight of the two-day World Championships and, in one way or another, it should decide the outcome in a 1 ¼-mile test of speed and stamina that will likely crown the Horse of the Year.

While how they break from the gate will determine where both Flightline and Life Is Good find themselves approaching the first turn, by the time they reach the backstretch, the two exceptionally fast rivals should be in close proximity, making for an epic duel that could separate one or both from the rest of the field or exhaust them and open the door for an upset.

In the case of Flightline – who will start from post 4 under Flavien Prat at 3-5 odds – aside from Horse of the Year honors, the Classic could also determine the Tapit colt’s worthiness of inclusion in Horse of the Decade or Horse of the 21st century discussions. He’s been that brilliant in a short but spectacular five-race career for trainer John Sadler and the ownership group of Hronis Racing, breeder Summer Wind Equine, West Point Thoroughbreds, Woodford Racing, and Siena Farm.

“He’s an exceptional horse. He’s a one-of-a-kind horse. Before he ever ran in a race, it clicked in my mind he was the best I’ve ever had,” said Sadler, who won the 2018 Classic with Accelerate.

Bought for $1 million from the Lane’s End consignment at The Saratoga Sale, Fasig-Tipton’s New York sale of select yearlings, the colt out of the Indian Charlie mare Feathered is the heavy favorite to capture both the Classic and the Horse of the Year title. Not only was the $1.39 million earner a unanimous No. 1 choice in the final Breeders’ Cup Classic poll, but he currently sits atop the Longines World’s Best Racehorse ratings with his perfect record.

In those five starts, three of them Grade 1 victories, Flightline has prevailed by a combined total of nearly 63 lengths. An easy winner of the Hill ‘n’ Dale Metropolitan Handicap and Runhappy Malibu Stakes, the future Lane’s End stallion left jaws agape in his last start. Facing a field in the Sept. 3 TVG Pacific Classic Stakes that included $12 million Dubai World Cup Sponsored by Emirates Airline winner Country Grammer, Flightline grabbed the early lead and ran away from the field as if he had sprouted wings like the mythical Pegasus.

At the wire, he was 19 ¼ lengths ahead of Country Grammer in the near track record time of 1:59.28 for the 1 1/4 miles, turning one of the year’s most important races into one of the most dominant performances in recent memory.

“Every time there has been a question mark, he has responded the right way,” said Flavien Prat, Flightline’s jockey in all five starts. “The Pacific Classic was a great feeling. He was running that distance for the first time, running around two turns for the first time, facing older horses for the first time, and he turned in an amazing performance. At the eighth pole, I thought I was a few lengths ahead; then when I looked around at the other horses so far behind me, I could not believe what I saw.”

Suffice it to say, if Flightline, in what is likely to be his last race, comes close to duplicating his performance in the Pacific Classic, it will make for an imposing, uphill task for his rivals.

“If Flightline is as good as we think he is, nobody is going to beat him,” said Robert Clay of Grandview Equine, which owns a share of one of the top contenders in the Classic, Jockey Club Gold Cup winner Olympiad.

Yet, as unbeatable as Flightline has looked, strange things have been known to happen in a horse race and the Classic offers enough class and quality to make the centerpiece of the World Championships a highly anticipated showdown.

In particular, China Horse Club and WinStar Farm’s Life Is Good cannot be overlooked as he enters post 2 in what will be his final start before beginning life as a stallion at WinStar Farm.

In most years he would be the favorite in the Horse of the Year race. The son of Into Mischief has won nine of 11 career starts, which includes a nearly six-length score in last year’s Big Ass Fans Breeders’ Cup Dirt Mile and three other Grade 1 victories.

His 2022 slate for trainer Todd Pletcher lists four wins in five starts, with the front-running victories coming in the Pegasus World Cup Invitational Stakes Presented by 1/ST BET, John A. Nerud Stakes, Whitney Stakes, and Woodward Stakes. The lone loss occurred overseas when he traveled beyond 1 1/8 miles for the first time and faced international competition in the 1 ¼-mile Dubai World Cup. Though he set the pace and looked strong at the top of the stretch, the son of the Distorted Humor mare Beach Walk bred by Gary and Mary West tired late and finished fourth, 2 ¼ lengths behind Country Grammer.

“It will be a tough task with Flightline in there, but Life Is Good is a great horse,” said Elliott Walden, CEO/president and racing manager of WinStar Farm. “One of the reasons we’re running in the Classic is to put the best horses in the best races and see what happens.”

At the Oct. 31 post-position draw, Life Is Good, who has led at virtually every early call in his 11-race career, drew post 2 and will break inside of Flightline.

“I guess if I was splitting hairs, I rather be outside (of Flightline), but if he breaks as well as he has in his last few starts, then you know he going to put himself in a good position,” Pletcher said about Life Is Good, the 6-1 third choice on the morning line.

With a lengthy run to the first turn, Sadler he was pleased with post four for Flightline.

While Life is Good’s loss at 1 ¼  miles might paint him as vulnerable in the Classic, his dazzling early speed creates the possibility of an electrifying speed duel that will test the skills of Prat on Flightline and Irad Ortiz Jr. on Life Is Good.

“Life Is Good has so much natural speed, we envision him being forwardly placed. We’re not taking away anything that comes easily to him,” Pletcher said. “Going up against a horse like Flightline that is so talented and has so much speed, it makes for an interesting jockeys’ race.”

Prat also expects the battle lines between Flightline and Life Is Good to be drawn early in the race.

“Life Is Good looks like the main competition. It looks like one of the best Classics ever and will be exciting,” Prat said. “Life Is Good is a great horse. I had a chance to ride him (in the Nerud) and he’s really fast. He has great speed. That’s his weapon. If everything goes well, we should be close to each other.”

The other starters will be hoping that “closeness” ignites a withering pace.

Foremost among them is the 4-year-old Olympiad, a son of Speightstown, coming off a win in the 1 ¼-mile Jockey Club Gold Cup that pushed his 2022 record to six wins in seven starts for trainer Bill Mott and owners Grandview Equine, Cheyenne Stable, and LNJ Foxwoods. He departs post 7 under Junior Alvarado at odds of 10-1.

A trio of 3-year-olds should also provide much of the competition. Winchell Thoroughbreds’ Runhappy Travers Stakes winner Epicenter (post 6, 5-1), trained by Steve Asmussen, is the pro-tem leader of the division with a résumé that includes seconds in the Kentucky Derby Presented by Woodford Reserve and the Preakness Stakes. Eclipse Award-winning jockey Joel Rosario, who’s been aboard Epicenter for eight of his 10 starts, retains the mount.

“He’s doing great and he shows up every time,” David Fiske, racing manager for Winchell Thoroughbreds said, “but this is a steep mountain to climb. Apparently odds-on favorites do not have a great record at the Breeders’ Cup, and some horses like Keeneland while some don’t, so at least there are some variables.”

Zedan Racing Stable’s Taiba (post 1, 8-1) won the Pennsylvania Derby after being beaten by a head in the TVG.com Haskell Stakes, and if trainer Bob Baffert finds a way to win the Classic for a record-extending fifth time that could swing the 3-year-old championship in the direction of the Gun Runner colt. He’ll be ridden by all-time Breeders’ Cup wins and earnings leader Mike Smith.

Red TR-Racing’s Rich Strike (post 8, 20-1) rode a rocket ship to fame by posting an 80.80-1 upset win for trainer Eric Reed in the Kentucky Derby, though he’s winless in three starts since then with regular rider Sonny Leon aboard. On a more promising note, the son of Keen Ice was beaten only a head by Classic starter Hot Rod Charlie last time out in the Lukas Classic Stakes and could be rounding back into top form at another highly opportune time.

Hot Rod Charlie is the lone returnee from last year’s Classic. The Oxbow colt was fourth a year ago and has been no worse than third in five 2022 starts for Doug O’Neill. He departs post 5 under Tyler Gaffalione at odds of 15-1, and he’ll sure to have vociferous vocal support in the Keeneland stands from his ownership group of Boat Racing, Roadrunner Racing, Gainesway Farm, and William Strauss as well as a lot of attendees for whom he is a fan favorite.

Pletcher will also send out Alain and Gerard Wertheimer’s Happy Saver (post 3, 30-1), who has not won a stakes since the 2020 Jockey Club Gold Cup. Yet the 5-year-old son of Super Saver is certainly capable of figuring in the exotics with a career mark of 5-5-1 in 12 career starts. Hall of Famer John Velazquez has the mount.

2022-11-01
Previous Post: TAB NZ Reports $6.6M in Profit for September
Next Post: The Newest Casino Resorts to Check Out in Las Vegas