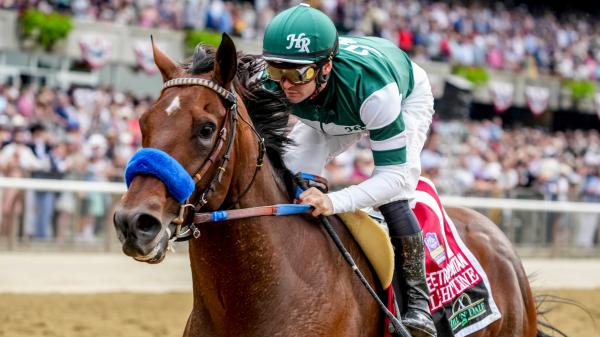 “So, how would you describe Flightline to a casual fan?” This is a question I’ve been asked and pondered, and my instinctive answer is simply, he’s Tecmo Bowl Bo Jackson. In other words, just an unstoppable force reminiscent of the greatest video game athlete of all time who is leaps and bounds better than the opposition.

Of course, most people who have an interest in horse racing were not in grade school when the original Nintendo game system was introduced, so I decided to adjust and look for some athletes across multiple generations that remind me of Flightline. In sports terms, Flightline might be a cross of Bjorn Borg, Mike Tyson, Eric Davis, and Bo Jackson. Let me explain.

A few weeks back I posted a profile of unbeaten Longines Breeders’ Cup Classic favorite Flightline, in which I compared his elite ability with some Hall of Famers from different sports. The comparisons were simply looking at peak ability (not longevity) to point out that a racehorse with freakish talent like Flightline is both extraordinarily rare and worthy of acclaim.

In hindsight, however, some of the critiques regarding the athletes referenced with in the story and on social media posts are fair because longevity was a huge part of the legacies of superstars like Hank Aaron, Michael Jordan, and Wilt Chamberlain. Aaron, for example, was an All-Star for 21 straight seasons and finished in the top 17 in MVP voting for 19 years in a row from 1955 to 1973. Jordan was 11-time All-NBA player and 10-time scoring champion who played 82 games in a season nine times and won five MVPs.

Of course, all sports have changed over the years. No NBA star plays all 82 games in a season anymore; we’ve all become familiar with “load management.” Hall of Fame pitcher Bob Gibson completed 28 games in 1968 and then completed 28 again in 1969. In 2022, only four pitchers recorded more than one complete game. Times change.

Likewise, John Henry, a two-time Horse of the Year in the 1980s, made between 10 and 19 starts in each of his first five seasons on his way to winning 39 of 83 career starts. Racing’s elite current stars might make six to nine starts a year, and often they race just four or five times a season. Athletes are now managed differently in almost all major sports, including horse racing. Because of that, the way we evaluate greatness is evolving, too.

For this exercise, with Flightline in mind, let’s look back on some brilliant athletes who were as good as anyone at their peak but whose résumés were not as robust as an Aaron or Wayne Gretzky.

Flightline has gotten off to a remarkable start to his career as Keeler Johnson chronicled here, so let’s take a look at a few athletes who were dominant for shorter stretches during their careers. While the current plan is for Flightline to remain in training in 2023, even if he raced in the 2022 Breeders’ Cup Classic and up to six times next year, he would finish with 12 starts or fewer.

Two athletes I thought of right away were tennis legend Bjorn Borg and heavyweight boxing champion Mike Tyson, elite athletes who were polar opposites in the way they carried themselves off the playing field.

For a stretch in the 1970s, Borg was the biggest draw in tennis, combining extraordinary ability, good looks, and an unflappable demeanor to become a tennis teen idol. The serene Swede in 1974 became, at the time, the youngest French Open winner at the age of 18. It was the first of six French Open titles for Borg, who also won five straight Wimbledon Championships from 1976 to 1980 and was named ATP Player of the Year for the same five-year stretch. The stress of pro tennis took a toll on Borg, however, and he shocked the sport by retiring in 1983. He did attempt several comebacks but never regained his championship form.

Tyson is an easy comp for Flightline because he was similarly overwhelming to opponents, pretty much from day one. Nine of Tyson’s first 12 fights were first-round knockouts. Although he technically had a 20-year career, his peak was really much shorter as he won the heavyweight title in November 1986 as a 20-year-old and defended it nine times until he allowed himself to lose his edge and was knocked out by Buster Douglas on Feb. 11, 1990, in one of the most shocking upsets in sports history.

Of Tyson’s 37 professional boxing wins without a loss up until the Douglas fight, 23 were by knockout in either the first or second round. That stretch, of course, included an unforgettable 91-second destruction of previously unbeaten Michael Spinks on a June 27, 1988, pay-per-view event in which the fight was over before many even got to their seats.

Tyson, the man, is a flawed person who has made many well-chronicled mistakes outside of the boxing ring, but for this comparison to err is human and Flightline is equine, so we’ll focus simply on athletic performance.

The longevity factor might make Eric Davis an imperfect comparison to Flightline – he played 17 seasons in major League Baseball – but injuries took such a huge toll on his body that his peak was fairly short. But what a peak it was … as the must-follow Super 70s Sports Twitter account is keen to remind us.

For five years from 1986 to 1990, Davis was an MVP candidate and three-time Gold Glove Award winner with a combination of power and speed that made him a nightmare for opposing pitchers. The injures were almost always present as he averaged only 131 games during that stretch but averaged 29.6 homers and 41.4 stolen bases, including a 24-year-old season in which he stole 80 bases and ripped 27 home runs. The first injury was to his ribcage when he slammed into the brick outfield wall at Wrigley Field to make a catch in September 1987 and he later had knee, hamstring, wrist, and shoulder injuries. Davis never played more than 135 games in a single season or logged more than 472 at-bats, but for a five-year window in the late 1980s to 1990, Eric Davis was positively electric.

That brings us to Vincent Edward “Bo” Jackson, who like Flightline was one of the most impressive physical athletes of my lifetime … and probably THE most impressive until a hip injury derailed his remarkable two-sport career.

Bo Jackson’s highlights were just different, the sound of the ball exploding off his bat was distinctive, the impact he made on opposing tacklers looked and felt different. His athleticism from an early age was no secret. He was drafted three times by Major League Baseball teams in 1982, 1985, and 1986 and twice by NFL teams, including first overall in the 1986 draft by the Tampa Bay Buccaneers … an ignominious franchise for which he refused to play. Instead, Jackson chose baseball, which he explained was his “first love.” Jackson needed only 53 games in the minor leagues before his MLB debut and famously led off the 1989 All-Star Game for the American League with a monster home run. Jackson could run down almost any fly ball with his incredible speed – he reportedly ran a 4.13 40-yard dash at a pro day at Auburn University, where he was a two-sport star – and boasted a howitzer throwing arm as you can see in these highlights.

Eventually, the NFL beckoned and he became the premier two-pro sports star and still the only player to be an all-star in pro baseball and football. Jackson won the Heisman Trophy by rushing for 1,786 yards in 1985 and galloping for more than 200 yards in four different games. He picked up right where he left off on the gridiron as a pro, despite the time away, albeit in limited action since he always had to wait until the Major League Baseball season was over.

He was a human torpedo in four seasons with the Los Angeles Raiders, who drafted him in 1987 after he turned down the Buccaneers, while playing between seven and 11 games. He owned the longest run from scrimmage in three of his four seasons, with a 91-yard jaunt in 1987, a 92-yard blast in 1989, and an 88-yard burst in 1990.

Every time Bo touched the football, there was a feeling that something magical could happen, and that’s why he reminds me of Flightline, because, as one sports commentor said, “there was something obvious about his greatness.”