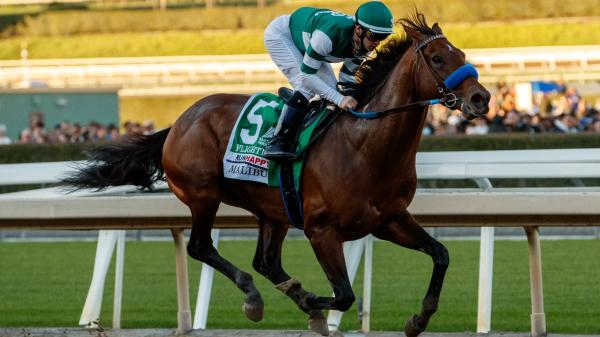 On Stephanie Hronis’ first visit to Saratoga, in 2019 to attend a board meeting as a trustee of the Thoroughbred Owners and Breeders Association, her TOBA colleagues took her to the Saratoga yearling sale. She, Terry Finley of West Point Thoroughbreds, and bloodstock agent David Ingordo put their heads together, and by the end of the sale they bought a son of Tapit for $1 million.

“I said that I was going to enjoy the Whitney weekend and soak it all up,” said Hronis. “I had some horses picked, and David pulled it together.”

“We had partnered (with Hronis Racing) on a couple of horses before, and everything just kind of fell into place,” said Finley.

Call it serendipity because that partnership resulted in Flightline, who annihilated a stellar field in the Dec. 26 Grade 1 Runhappy Malibu Stakes at Santa Anita. West Point and Kosta, Stephanie, and Pete Hronis of Hronis Racing eventually expanded the ownership to include the breeder, Jane Lyon’s Summer Wind Equine, along with Siena Farm and Woodford Racing. A Kentucky-bred son of the Indian Charlie mare Feathered, Flightline in the Malibu continued a career that has thus far been brief but absolutely brilliant.

In the Malibu, Flightline, the 2-5 favorite, had the services of jockey Flavien Prat, who had his choice of Flightline, Grade 1 Qatar Breeders’ Cup Sprint second-place finisher Dr. Schivel, and undefeated Triple Tap, a half-brother to Triple Crown winner American Pharoah.

Against that kind of competition, which also included Grade 2 Vosburgh Stakes third Baby Yoda, things figured to be tougher than Flightline’s two previous outings, wins of 13 1/4 lengths and 12 3/4 lengths. But it wasn’t.

“I was in cruise control the whole race, galloping freely,” said Prat. “I wanted to get a good position and get myself into the race.”

Flightline began pulling away at the three-eighths pole. The margin of one length became five and then six, and then it no longer mattered. For the record, when Flightline reached the wire, he coasted home 11 1/2 lengths ahead of Baby Yoda, stopping the clock in 1:21.37 for seven furlongs. Baby Yoda finished a length in front of Stilleto Boy.

John Sadler trains Flightline for the partnership, and he liked the colt from the first time he saw him. West Point signed the ticket at the sale from consignor Lane’s End, and Sadler happened to be in Kentucky when the colt returned to Lane’s End before heading to Florida to be broken.

“I looked at this beautiful horse and was excited from day one,” said the trainer.

Sadler says that Flightline has such sheer talent that most of his job has been one of stewardship, seeing that the colt doesn’t do too much too soon. Flightline’s brief career to date–his first start in April as a 3-year-old and his second last September–was due to a couple of setbacks, one an incident between Flightline and a fence before Sadler ever got him.

A foot bruise later also caused the team to take it slowly. Sadler pointed for the Malibu at seven furlongs, one last opportunity against 3-year-olds before he has to tackle older runners.

“There is a lot of pressure on you, but it is the pressure you want,” said Sadler of training such a talent. “It’s like the high school coach for LeBron. You know you have something special, and he is much the best.”

Flightline will likely also stretch out, distance not looking like it will be an obstacle.

“The next race is up to the horse,” Sadler said. “We have to be true to the horse. This horse is so brilliant. This is not an ordinary horse–this is a very special horse.” –Tracy Gantz

With the nose victory in the Dec. 26 test, C R K Stable’s Express Train closed out his 4-year-old season in style. The son of classic winner Union Rags completed the 1 1/16-mile test for 3-year-olds and older in 1:44.82 to nail down his third grade 2 win.

Lee Searing of C R K Stable said he thought Express Train prevailed at the wire despite the photo finish. He credited jockey Victor Espinoza for asking the colt for his best at precisely the right time.

“It was really tight and I think I got out just in time,” Espinoza said. “I was able to follow and move with Hot Rod Charlie. This horse takes a little bit of time at the turn, so I had to start pedaling to start following the other horses. Turning for home and squeezing for the lead is when he really accelerated. At that point I knew my only shot was to calculate him to win right at the wire. Sometimes things go the way we calculate turning for home, and sometimes they don’t. Today it worked out and we got it right at the wire.” -Frank Angst