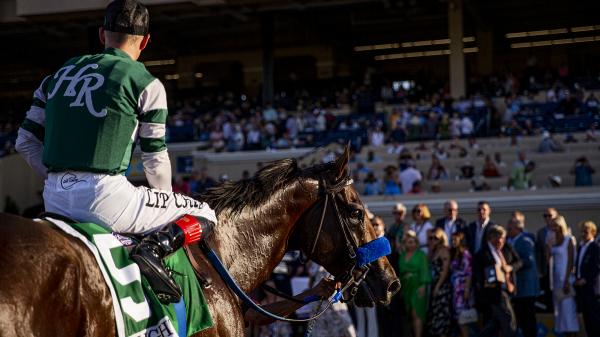 QUESTION ANSWERED: The only doubt surrounding undefeated Flightline before the Pacific Classic involved whether the classic distance of a mile and a quarter was within his scope. No one dares to ask that any more. The remarkable 4-year-old son of Tapit, with Flavien Prat aboard merely as a passenger, ran a race for the ages in crushing the field by a record 19 ¼ lengths, eclipsing the mark of 12 ½ lengths set by Accelerate in the event’s 2018 edition. His final time of 1:59.28 fell only 17 hundredths of a second short of the Del Mar track record Candy Ride established in 2003. In the end, ecstatic trainer John Sadler was not that surprised. “Did I think he could do that, win like that?” Sadler asked rhetorically after the lightly raced Flightline made it 5-for-5 lifetime. “Kinda, yeah. You don’t want to say it in front of the race, but now that he’s done it…The thing about him is that he’s fast and he can carry it. Some horses are fast, but they can’t go on. This horse can.” Flightline secured a berth in the $6 million Longines Breeders’ Cup Classic on Nov. 5 at Keeneland with all fees paid.

SECOND BEST: Country Grammer is a good horse, but Hall of Fame trainer Bob Baffert knew before the Pacific Classic that he was running for second and he made that clear to his rider, John Velazquez. “I told Johnny, ‘Don’t chase that horse. He’s a really great horse. If you chase, you won’t get anything,’” Baffert related. “I wanted to run at least second to him. We got beat by an incredible horse.” Country Grammer did, indeed, finish a distant second. Baffert, of course, knows incredible horses. He oversaw Triple Crown champions American Pharoah in 2015 and Justify in 2018.

RESURGENT OLYMPIAD: After opening the season with a five-race winning streak, the last four of them in graded stakes, Olympiad threw in a lackluster fourth-place clunker in the Aug. 6 Whitney Stakes. Hall of Fame trainer Bill Mott was concerned that the Whitney might signal the horse was souring on him. He has those worries no longer after Olympiad, piloted by regular rider Junior Alvarado, rebounded with an authoritative two-length victory against Americanrevolution in the Jockey Club Gold Cup for his first Grade 1 score. “It’s gratifying to see him come back,” Mott said. “The performance the other day was almost too bad to be true considering the form he had been in the previous five races. It was just good to see him bounce back.” Mott believes his colt might have fallen victim to the hot, humid weather on Whitney Day. The Jockey Club decision gave Olympiad a fees-paid berth in the Longines Breeders’ Cup Classic.

UPSET SPECIAL: Jockey Irad Ortiz, Jr. got away with a pace that was slow and slower in guiding front-running Virginia Joy to an upset of War Like Goddess in the $600,000, Grade 2 Flower Bowl Stakes. Virginia Joy all but crawled through an opening half-mile in 53.29 seconds. She continued to plod along through three-quarters in 1:19.59 en route to a final time of 2:19.51 for the 1 3/8-mile contest. The question now is whether the connections will deem the winner worthy of using the fees-paid entry she earned to the Maker’s Mark Breeders’ Cup Filly and Mare Turf. “She certainly showed a lot (Saturday),” said winning trainer Chad Brown. “She had it her way, though, to be realistic about it. We’ll see. The races get harder as you start to put the Grade 1s next to them. She’s a quality horse and probably deserves consideration.”

LATE MOVE?: Jockey Joel Rosario, the Eclipse Award winner last season as the leading jockey in North America, saved every possible inch of ground and stayed patient behind an incredibly slow pace in the Flower Bowl. Mott suggested afterward that his rider might have stayed too patient. “He was stuck down on the rail. I’m not sure if he had an opportunity to maybe let her pick up horses and I think there was maybe one point where he did, but he opted not to do it,” Mott said. “She came flying. She’s a good horse. I don’t know how fast she came home, but she was rolling. Pace makes the race. And, in this case, it wasn’t meant for us.”