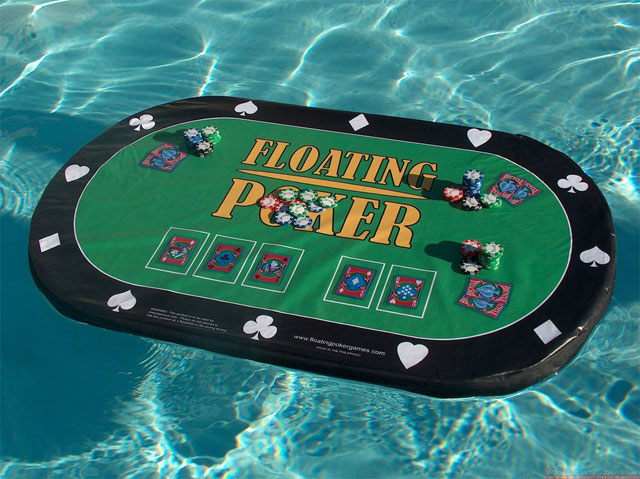 Float Your Way Toward a Profitable Session

There are some players who break even or make a little money playing very obviously. They are known as ABC players – as they play strictly “by the book.” They’re predictable, playing their very narrow range strongly. When they do have a hand, they bet it aggressively unless — or until — they see an opponent who appears to be stronger. It’s as if they are playing with their cards exposed. They can profit from mediocre or poor players who don’t recognize and adjust to their obvious play, but against good players, they’re toast.

For as much fun as this may be, it isn’t what we’re talking about when we discuss the concept of “floating” in poker. (Image: Amazon)

Unfortunately for ABC players, No-Limit Hold’em games are getting increasingly tough as the poor and mediocre players tend to either smarten up or leave. The fishing ain’t what it used to be, you might say. Accordingly, predictable players must themselves adjust or perish, as they need to add to their highly predictable arsenal if they want to stay competitive with better and more observant players who will eventually figure out their obvious style and apply countermeasures.

One of the plays that a relatively conventional player can add is called “floating,” which can be an easy and profitable way to win a hand on the river.

Floating is a call, usually in position, with the intention of bluffing on a later street after an opponent checks.

For example, put yourself in the cutoff in this $1/3 No-Limit game. A relatively tight player raises to $12 in middle position and the action folds to you. You have K♥ 6♥ and an effective stack of $300.

Your conventional play would usually be to fold. Even though you have position, you know your opponent to play a relatively strong range from middle position and that you’re almost surely behind. Your king-high flush draw is only about 3% likely to make a flush by the river. Even if a king flops, you have a terrible kicker. And so a fold is probably in order.

Instead, however, you call. The flop is J♠ 8♥ 4♠ and you’ve missed completely with nothing more than a back-door flush draw. Your opponent checks and you “float-bet” $20. Your opponent folds. You’ve just executed a successful float play.

This could also be done on the turn if your opponent c-bets the flop and you call. Some would call this a double float.

There are chiefly three strategic advantages to floating:

ABC players are easy targets for good aggressive players. LAGs and TAGs can steal pots from them knowing that ABC players stick to predictable, narrow, preflop ranges and typically fold to pressure if the board hasn’t hit their hand. Since most boards miss players with narrow and predictable holdings, c-bets and aggressive turn bets are an effective way to win money from ABC players.

By incorporating floats into their arsenal, a player increases the percentage of the time he is playing back at an aggressor, often winning the pot from them on re-steal attempts.

Having been burned by this unexpected aggression, villains will be less likely to attempt aggressive plays in the future.

A float-bet of 50% of the pot only has to be effective about 33% of the time to show a profit. Typically, players fold more frequently than that – especially to players who have an image of being relatively tight and predictable.

Against bad players, you can win just by playing a conventional, ABC, tight-aggressive game. But as your opponents get more observant and more disciplined, this won’t work.

Floating and then float-betting will help confuse your good opponents, as they’ll start to wonder, given your increased frequency of betting, if you really have the strong hands you represent. Their uncertainty will translate into mistakes. They won’t be certain that your strong bets mean you have a strong hand, and they won’t be able to simply fold when you bet, allowing you to win money from them when you have the better hand.

A final word of caution

You don’t want to attempt a float play too frequently, lest your opponents wise up and it becomes less effective.

Opponents who recognize your tendency to float will start to come over the top or set you up with check-raises. You may want to limit yourself to floating when there are semi-bluffing qualities to your hand. For example, you might want to limit floats on the flop to times when you have at least backdoor flush or gut-shot straight draws to go with your float.

When done selectively, floating will help keep you from sinking into predictable and unprofitable play.

2022-10-29
Previous Post: Nevada Gaming Retains Momentum in September
Next Post: What to Know About Super Saturday Races at the 2022 Breeders’ Cup