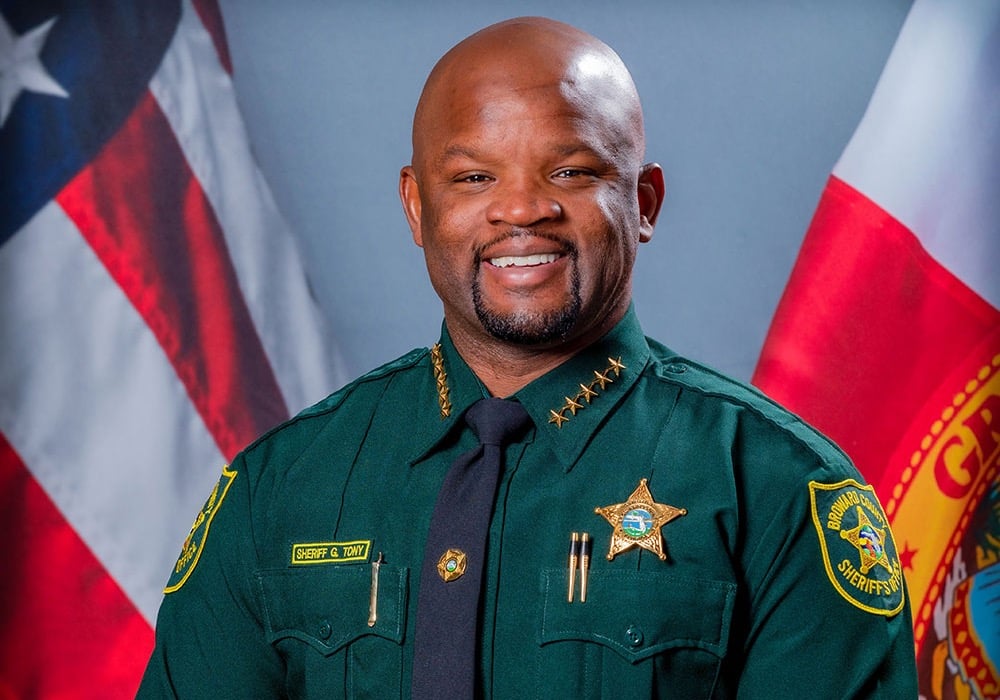 A sheriff in South Florida wants to retain more than $1.2 million in cash, along with other items. The bounty was seized earlier this year during searches tied to an illegal bookmaking investigation that has yet to produce any criminal charges.

Broward County Sheriff Gregory Tony has filed a petition in the Florida county’s courts to seize more than $1.2 million in assets through the state’s civil forfeiture laws. Tony’s petition claims the money and other assets were part of an illegal gambling ring that’s under investigation. (Image: Florida Sheriffs Association)

The South Florida Sun Sentinel reported Thursday that the Office of the Statewide Prosecutor has told four men they are under investigation. While none currently have been indicted, court records show Broward County Sheriff Gregory Tony first sought to seize the money on May 7, three weeks after searches at four locations. The haul included nine $1,000 poker chips and 25 gold coins with an estimated value of more than $44,000.

Tony then filed an amended petition on Aug. 23.

Like all other US states, Florida has civil forfeiture statutes that allow law enforcement to keep assets taken during searches or stops. According to FindLaw.com, Florida’s statute only requires that law enforcement prove “beyond a reasonable doubt that the property is linked to a crime.”

According to an Orlando Sentinel article, Florida law enforcement officials seized more than $265 million in cash and personal property in 2018. That was more than any other state in the country.

According to Tony’s petition, his office’s Organized Crime Unit got a tip from a Crime Stoppers call in December 2018. The message was that a man named William Cascioli was part of a group running an illegal gambling and money laundering ring in South Florida.

“The tipster further advised that members of the organization operate an illegal sports betting operation comprised of multiple partners and that the organization receives hundreds of thousands of dollars in proceeds weekly,” the complaint stated.

After the call, sheriff’s officers began to track Cascioli. During that time, the officers noted Cascioli held several meetings in Davie, a Broward County community. He was also found picking up an unidentified white male with a backpack from Terminal 3 of the Fort Lauderdale-Hollywood International Airport. The two drove off, but returned minutes later to the Terminal 1 departure building. There, the unknown male exited the car with the backpack.

From the airport, the civil forfeiture petition says officers saw Cascioli go to a CVS Pharmacy, where he purchased two Yahtzee board games. Less than an hour later, he went to a FedEx location to ship the Yahtzee games. One went to Texas and the other to California.

While in line with the clerk, Cascioli was overheard utilizing his cellular device communicating with an individual he referred to as ‘Stevie Boy’ and discussing the point spreads, odds on the Super Bowl, and horse racing,” the complaint states.

FedEx officials would open the boxes as part of the company’s policies against shipping illegal contraband. They found more than $200,000 in cash in both Yahtzee boxes.

That money was eventually seized, and further investigation found that the illegal bookmaking ring was allegedly prevalent in Broward, Miami-Dade, Palm Beach, Collier, and Martin counties.

The Broward County Sheriff’s Office also alleges the ring used a website, betbigcity.ag, to run its operation, with an account established by Cascioli. The complaint states that 23 agents of the ring had accounts, with 115 clients using the site.

This past April, the sheriff’s office filed for search warrants for Cascioli’s Palm Beach County home and for residences of three other people, Todd Schettino, Harris Steinhart, and Martin Zarcadoolas. Warrants were also filed for accounts connected to Zarcadoolas, Cascioli, and Voehringer Realty LLC.

The sheriff’s petition alleges that Zarcadoolas was a high-ranking member of the organization, and accounts in his name were used to “conceal the proceeds of their illegal bookmaking activity.”

Among the property seized from Zarcadoolas included the gold coins and poker chips, as well as more than $183,000 from a closet safe at his residence. Law enforcement also confiscated several electronic devices, such as a MacBook, a Chromebook, iPads, and cell phones, and men’s Breitling, Cartier, and Rolex watches.

Bank seizures from Zarcadoolas included nearly $600,000 from an account at Chase Bank, and more than $165,000 from a Bank of America account.

Zarcadoolas has denied his involvement in the illegal gambling ring. Court documents show he has fought efforts to have his possessions seized through civil forfeiture.

“The seizing law enforcement agency effectuated an unconstitutional search of Zarcadoolas’ home in violation of the Fourth Amendment to the Florida Constitution and the United States Constitution,” Zarcadoolas’ response to the amended complaint states.