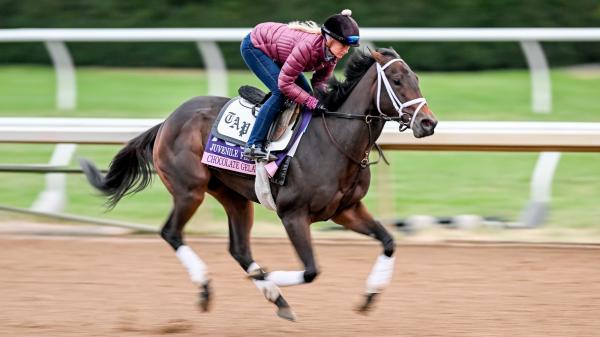 The Breeders’ Cup World Championships is the ultimate handicapping puzzle for horseplayers, and it’s especially appealing to those who adhere to the maxim of “bet a little to win a lot.”

The 14-race slate of Breeders’ Cup races brings together great horses from all regions in the U.S. as well as from overseas, which means that year after year, top-class runners with full résumés go off at odds far higher than they would in any other setting.

Finding and playing longshots in the Breeders’ Cup can become even more lucrative if you are able to also select – and toss from your betting slips – several horses that are underlays; that is, ones that are receiving more support from bettors than they should and thus carrying lower odds (check out ABR’s primer on gambling terms for more info). Zigging while everyone else zags is the essence of astute betting in any environment, and in horse racing it can lead to astronomical payouts.

So, which morning-line favorites in the 39th Breeders’ Cup at Keeneland Race Course are vulnerable to lose at short odds? Four candidates are listed below – and no, I’m not including Flightline, the 3-5 morning-line favorite for the Longines Breeders’ Cup Classic. I, like most everyone else, look long and hard at every race for opportunities to beat the favorite, but to do so in this case would be to hope for bad racing luck … and no one ever wants that.

This filly comes to Keeneland having won her most recent two of three career starts, most recently taking the one-turn mile Frizette Stakes by a length at the Belmont at the Big A meet (held at Aqueduct) on Oct. 2. The Todd Pletcher trainee prevailed as the 1.65-favorite on a sloppy track in the Frizette, and was made the lukewarm 7-2 favorite in the NetJets Juvenile Fillies. This race is wide open, and the 1-2 finishers exiting the Darley Alcibiades Stakes Oct. 8 – Wonder Wheel and Chop Chop – are pegged at odds of 5-1 and 9-2, respectively. Both of them have raced on Keeneland’s track and have shown they can handle two turns, neither of which Chocolate Gelato has done. I prefer Chop Chop among the single-digit odds horses in the Juvenile Fillies, and also think Chocolate Gelato’s stablemate Atomically, a Florida-bred Girvin filly who’s won two races against state-breds impressively at Gulfstream Park (including a last-out stakes win at 1 1/16 miles) rates an upset chance at 12-1 on the morning line.

Cody’s Wish should be favored in the Dirt Mile. He’s won three straight races, six of his last seven, and recently knocked off Jackie’s Warrior in the Forego Stakes – and as everyone who follows the sport closely knows, he brings a truly inspirational storyline to the 2022 World Championships having been named for a special young man who has the rare Wolf-Hirschorn genetic disorder, Cody Dorman. But the Big Ass Fans Dirt Mile drew a tough field, and it will be held around two turns at Keeneland with a very short run-up to the first turn. All six of Cody’s Wish’s wins have come around one turn, although on the other hand his pedigree for route racing is excellent. I expect the Curlin colt, who’s shown the ability to either press the pace or fall back, to do the latter in the Dirt Mile, but in this case he may still be compromised because this race will end at Keeneland’s first finish line. Two horses stand out as big threats here: Laurel River (9-2), who’s also won three consecutive races, two of them going a two-turn mile at Del Mar, and Cyberknife (also 9-2), who’s been battling with the best of the 3-year-old class all year in two-turn routes with considerable success. Both of them should be ahead of Cody’s Wish through the backstretch and into the far turn, and they’ll be tough to run down.

As with Cody’s Wish, it’s hard to argue that Nest shouldn’t be favored in her Breeders’ Cup race. The probable champion 3-year-old filly has pulverized the competition in three consecutive races, most recently defeating elders by 9 ¾ lengths in the 1 1/8-mile Beldame Stakes in New York on Oct. 9. But her stablemate, 4-year-old Malathaat, also romped in a 1 1/8-mile race that day, taking the Juddmonte Spinster Stakes at Keeneland by 5 ¼ lengths. Malathaat, pegged at 3-1 on the morning-line, is 3-for-3 at Keeneland (Nest dominated in her only Keeneland start back in April), and she’s also faced tougher competition over the summer including both Clairiere (4-1) and Search Results (9-2), both of whom have an upset chance in the Longines Distaff. Truthfully, there’s very little that separates Nest and Malathaat, as Mike Curry points out in this “tale of the tape” feature. I expect their odds to nearly align by the time the starting gates open in what should be a great renewal of the Distaff – but if they stay closer to the morning line, Malathaat’s the play.

This European invader’s status as a lukewarm favorite may be temporary – I expect his stablemate Nations Pride (7-2) to get more support from horseplayers come post time. Nations Pride has already shown an affinity for U.S. turf racing, posting two wins in the New York Turf Triple Crown series in recent months, and Charlie Appleby’s first-call rider William Buick, who has ridden both Rebel’s Romance and Nations Pride, chooses the latter in the Longines Turf. I also would not be surprised if top-class U.S. turf mare War Like Goddess (9-2) has lower final odds than Rebel’s Romance; she’s won both of her 1 ½-mile starts at Keeneland by open lengths, albeit against lesser competition. Rebel’s Romance’s race record is certainly estimable – he’s 4-for-4 going a mile and a half – but his last two wins have come in Group 1 stakes races held in Germany. That country’s racing circuit is at a lower class level than England’s, Ireland’s, or France’s, which make higher-odds European-based horses such as Stone Age (15-1) and Broome (12-1) worth a look as potential upset candidates. Both of those runners from Aidan O’Brien’s barn also have stateside racing experience, in Broome’s case a near-victory in last year’s Longines Turf.