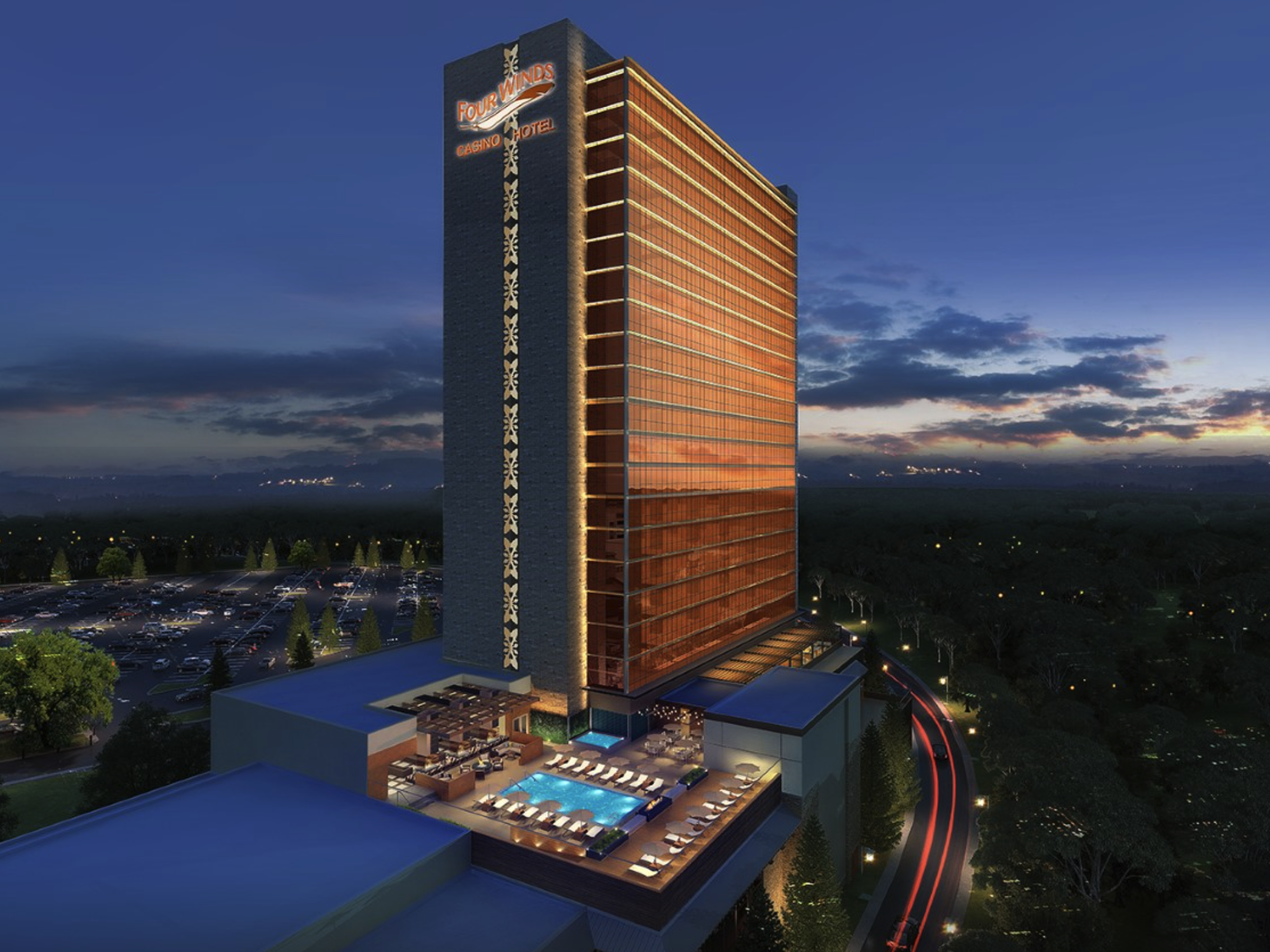 Indiana’s only tribal casino expects to open its hotel early next year.

A rendering of the Four Winds hotel currently under construction at the South Bend, Ind., casino. Officials with the Pokagon Band of Potawatomi Indians expect the 317-room hotel to open early next year. (Image: Four Winds South Bend)

In a release issued late last month, the Pokagon Band of Potawatomi Indians provided an update on the expansion effort for its Four Winds South Bend casino. Besides a 317-room hotel, the expansion includes a conference center, a spa, and added gaming seats.

We are very pleased with the collective efforts of our Four Winds team members, our project manager, construction contractors, job site employees and vendors as we work towards completing the expansion of Four Winds South Bend,” Four Winds COO Frank Freedman said in a statement. “The expanded resort will offer amenities and an entertainment experience that is not currently available in South Bend and Northwest Indiana.”

The conference center will be called the Ribbon Town Conference and Event Center. Ribbon Town is a nod to what the Pokagon call part of its ancestral territory in northern Indiana, which is where South Bend is based. The center will have 16 meeting rooms, a ballroom seating 600, two bars, a business center, and outdoor gathering space.

The hotel will feature 317 rooms, 83 of which will be suites.

Tribal leaders announced the hotel expansion effort in 2019. At that time, they hoped the work would be completed in two years. However, the COVID-19 pandemic forced a delay on the project.

The work has led to 350 construction jobs, including 35 of which have a preference for Native Americans. When completed, the expansion will create up to 400 new jobs at the casino resort.

At 2,250 slot machines, Four Winds South Bend would offer more than any other casino in Indiana. Horseshoe Hammond near the Indiana-Illinois state line features 1,853, according to the Indiana Gaming Commission.

South Bend, which sits right on the Indiana-Michigan state line, is one of four casinos the Pokagon Band operates in the area. The other three Four Winds Casinos are in southwestern Michigan.

Four Winds South Bend officially opened in January 2018, and for more than three years, it operated as a Class II facility. That means it could only offer slot-like electronic bingo games and non-banked poker.

At the same time it announced the expansion effort, the Pokagon Band also stated its intention to negotiate a Class III gaming compact with Indiana officials. Tribal leaders and Indiana Gov. Eric Holcomb’s office reached an agreement in January 2021, and lawmakers approved the compact that spring.

The compact allows the tribe to offer Las Vegas-style slot machines, and such table games as blackjack, craps, and roulette. The compact also allows the Pokagon Band to operate a sportsbook at the South Bend casino. As part of the compact, the tribe cannot offer more gaming seats than the largest commercial casino in Indiana. Horseshoe Hammond currently has 3,403 seats.

2022-06-06
Previous Post: Playson Head of Games Nikolay Illiustrov on His Immediate Plans in the Company
Next Post: Fox Report: Grumping and Photo Dumping