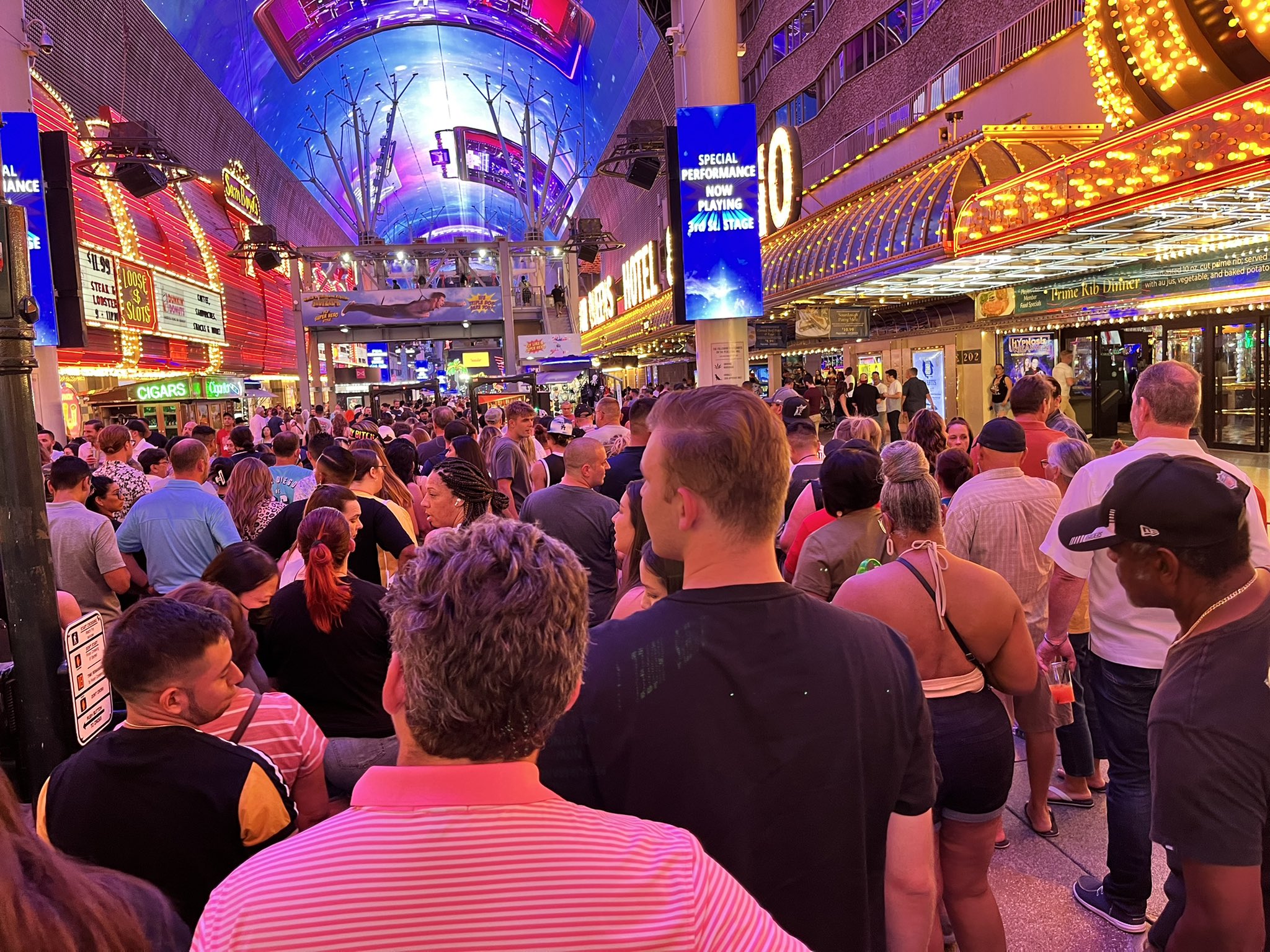 Metal detectors and security searches are slowing down those trying to reach the Fremont Street Experience (FSE), nearby casinos and other attractions in downtown Las Vegas. The backup was especially apparent on Casino Center this weekend.

Delays for pedestrians trying to reach the area around the Fremont Street Experience this weekend, pictured above. Metal detectors and other safety checks are now required weekends in the downtown Las Vegas area. (Image: Vital Vegas via Twitter)

One social media poster on Vital Vegas, A. Davis, early Saturday tweeted a photo of the delays near the popular pedestrian mall. Davis had to go through the crowds in order to get to work.

Someone didn’t think out this metal detector thing on Fremont Street very well,” Davis commented. “Just to cross Casino Center you have to go through another metal detector. Huge backup of angry people.”

This weekend is the second one in a row the FSE had crowds go through detectors, checked pedestrians’ bags, and screened IDs. The new safeguards include a limited weekend curfew on those under 21 years of age. The Las Vegas Metropolitan Police Department (LVMPD) has also upped its presence on and around Fremont Street in downtown on weekends.

The safeguards were put in place following recent shootings and other violent crimes in the area. The most serious was on June 19 when a 16-year-old boy allegedly fatally shot a man at the FSE. An innocent bystander also was wounded by gunfire.

But this weekend, social media posters warned about the impact the detectors and searches have on those patronizing local businesses. They complained too how the delays are annoying to visitors.

For instance, Adam Phynes tweeted that “detectors shouldn’t discourage passers thru (not going to a casino), as it cuts down on potential kiosk businesses.”

Some would-be visitors to the area are simply deciding to stay away.

For Biggs 5, the wait is “Just another reason why I avoid Vegas like the plague on weekends.” SDtoVegas agreed. “Wont be going down there anymore.”

Many of the new safeguards apparently came out of a meeting organized by Las Vegas Mayor Carolyn Goodman. Among those attending were downtown Las Vegas business leaders, police officials, and city leaders.

Las Vegas Mayor Carolyn Goodman, pictured above. She helped to lead the city’s response to increased crime in downtown Las Vegas. Some are annoyed by the new safeguards. (Image: AP/Gregory Bull)

That effort led one poster, G.E.R., to say, “This is what happens when politicians get involved.”

Officials are also considering expanding the current city of Las Vegas curfew on minors, which regulates those under 18 years of age. It would be upped to include those between 18 and 20 if enacted.

Other posters defended the reasoning behind the detectors.

“Angry, but alive,” Ed Rylant said about the crowds waiting to go through. Poster Steve T added, “if people would stop bringing guns to Fremont, it wouldn’t be an issue!”

Is there any suggested way to avoid the crowd?

One poster, identified as Crusher Man, advised, “The back doors of all the casinos were open, right on to #Freemont with no metal detectors.”

During last weekend in and around the FSE, Metro officers made 355 pedestrian stops, made 13 felony arrests, and seized four firearms from those attempting to get to the pedestrian mall and other downtown attractions, KVVU, a local TV station, reported.

The first weekend of increased security “was a great success through the increased presence and closely coordinated efforts of the LVMPD, City Marshals, and FSE Security,” FSE President and CEO Andrew Simon said in a statement.

The upped police presence on and around Fremont Street will continue through the summer, if not longer, KVVU said. FSE has permission for the security checks through November, the report adds.

No data yet on arrests, stops, and weapon seizures for this weekend. But no word of any new fatal shootings or serious violence in the area.