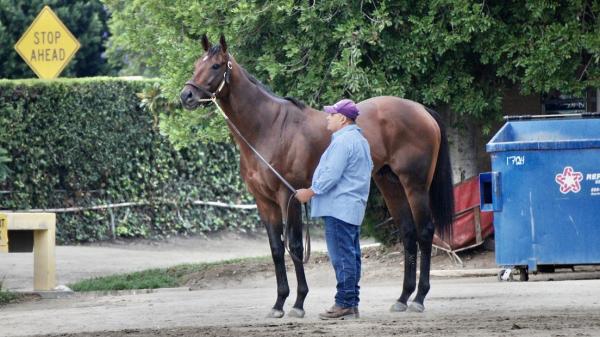 The mist fell in soft sheets from a black hole of a sky, and the atmosphere was more befitting the Scottish Highlands than the San Gabriel foothills. It was 5:45 a.m. on Saturday, Oct. 15, the morning of Flightline’s penultimate workout at Santa Anita Park. I had arrived extra-early, to insure a good vantage point at the rail bordering the ¼-mile chute, the area where the horses enter the racetrack from the barns. I needn’t have worried. Owing to the damp and dark conditions, the turn-out was light, allowing ample elbow room and the opportunity to absorb Flightline in all of his splendor in relative silence. The saturated air was filled with the wonderful earthiness of the sights, sounds, and smells of horses. Exercise riders called out a cheerful “Good morning,” as they bounced by, the energy from their freshly-worked mounts still not extinguished. Early morning hours at a racetrack are a world unto themselves, and it is impossible not to succumb to their unique beauty.

I was fiddling with the settings on my antiquated camera, wondering how I would possibly obtain decent photos under such dreary conditions, when I suddenly felt compelled to look up. Standing approximately 20 feet in front of me was a horse, silhouetted against the harsh glare of several spotlights. He was perfectly still. I knew instantly that this was Flightline. Even in the dim light, I could see that his large, luminous eyes were fastened directly upon me. In the outline of his shadow he looked as tightly coiled as a spring, and he carried no spare flesh. His only movement was his head, which he would occasionally cock from side-to-side, fastening his bright gaze upon anything that moved, however subtly. I was rapt, and unwilling to raise my camera, should I break the connection between us.

When I finally began shooting, the rhythm of the “click-click” of my camera captured his attention once more, and he pricked his ears, his eyes alight with interest. It was a sound which he obviously recognized, and liked. He stood proudly and motionless, not even appearing to breathe, while the surrounding horses fidgeted and paced restlessly. I clicked with abandon, with the realization that even the most talented photographer would be challenged to capture the essence of Flightline’s magnificence.

The tractors which had been raking the track surface during the 15-minute break began to exit, and Flightline and his companions slowly moved to the main body of the racetrack, Flightline was at the front of the pack, in full sight of the tractors in all of their roaring hugeness, but was unperturbed, pushing off into the semi-darkness with consummate grace. I took a position on the outer rail, along with a growing audience, and waited. We did not have to wait long.

On the far side of the track, a flashing red light, like a pulsing heart, suddenly appeared, advancing swiftly along the rail. It was the headlight worn on the helmet of Juan Leyva, trainer John Sadler’s assistant, warning other riders to look fast. Here was a very serious horse doing serious business. The signal moved with astonishing speed until Flightline was, for a few seconds, directly in front of us.  His hoofbeats were hushed, hardly making a sound, and he seemed to glide over the ground, not punish it. Juan’s back was so straight, he could have balanced a cup of coffee on it. Flightline flew by in a blur of no sound but plenty of fury, leaving me breathless and besotted. “What manner of horse is this?” That was the gripping question on everyone’s mind.

With Flightline now out of sight, it was time to sprint to the paddock gardens, to catch him as he passed through on his return to the stables. Most horses return to the barns via the chute, but Flightline and his people prefer to take the longer, more scenic route. He was easy to spot as he approached, accompanied by an entourage of stable staff and admirers. Flightline sauntered by the statue of the great Zenyatta as if he were out on a Sunday stroll. There was virtually no evidence that he had exerted himself in his cracking 6-furlong, 1:11.80 drill. As John Sadler commented in a post-work interview, Flightline “wasn’t breathing hard enough to blow out a match.” One member of Flightline’s party was Kosta Hronis, one of the principal owners, who followed closely behind in a golf cart, calling out that everyone else could walk, but HE was going to ride. If there is a happier man on the planet today than Kosta Hronis, I could not guess who it might be.

Even at a walk, the ebullient group was no match for Flightline’s speed, and by the time they arrived at John Sadler’s impeccably maintained barn, Flightline was already outfitted in a well-worn blue cooler and was one of a group of horses in the tow ring, accompanied by veteran foreman Rene Quinteros. The tow ring is an oval-shaped path located outside the stalls, where the horses are walked for a period of time following a workout in order to help their bodies cool down. It is a time-honored racetrack routine, but Flightline has embellished this tradition with a twist of his own. The barn regulars know it well, and will wait in amused expectation for the moment when Flightline will take a detour to the right and guide his handler to the center of the wide stable roadway. There he will stand, as solid as Seabiscuit’s statue, head raised and eyes staring into the distance in a most majestic manner. If one approaches and begins taking photos, he will accommodate them with an even longer pose, or he might even strike a different position. After several minutes of his one-horse show, Flightline will return to the tow ring, only to break away and repeat his act several times. He loves a crowd and loves the camera, and it is a mutual love affair.

I came away from my morning with Flightline more enthralled with this transcendent horse than I had even anticipated. In short, I had been “Flightlined,” and I looked forward to a replay of the same on the following Saturday, Oct. 22, when he would have his final Santa Anita work for the Breeders’ Cup Classic before shipping to Kentucky on Oct. 23.

Following an agonizingly slow week, the red-letter day of Flightline’s grand finale arrived, and with it a dichotomy of excited anticipation and dread, because Flightline would be leaving his Santa Anita home, perhaps forever. The morning was a duplicate of the previous Saturday, minus the mist. The sun failed to show its face, loathe to compete with a creature which it could not out-shine, and Flightline blistered the track with another 6-furlong work in 1:11.80. Back at John Sadler’s barn, the “Look of Eagles” show was on the road again, Sadler was more than pleased with the morning’s proceedings, and all was right in Flightline’s world.

With the priceless gift of watching Flightline at close range for those two mornings, I have come to the conclusion that there is no greater beauty in a raucous, troubled world than this resplendent racehorse. To be in his presence is to banish all of the fear and rancor, at least for a while. He is fully aware of who he is, a radiant soul who exudes specialness from every fiber of his being. And he may have untapped ability as a seer. During his final jaunt with Rene Quinteros, Flightline took him all the way to the back of the roadway, then stopped and struck a pose adjacent to a dumpster. I found it funny, but took a photo anyway because he looked so princely, even against that humble backdrop. When the photo was downloaded, I saw something which I had missed. To the left of Flightline was a traffic sign bearing the message: “STOP AHEAD.” How prophetic! Flightline’s life will soon be full of potential stops. A stop after the Breeders’ Cup? After the Pegasus?  After age five? No one knows at this point, and if Flightline does, he’s not talking. At least, not yet.