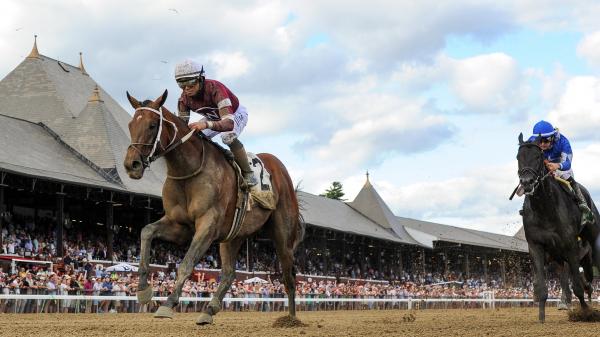 On a gorgeous late July afternoon at Saratoga Race Course, it was suddenly late April in Bluegrass Country.

While the impending Aug. 27 Runhappy Travers Stakes has the potential to settle championship honors, Epicenter illustrated why he was the favorite in both the Kentucky Derby Presented by Woodford Reserve and the Preakness Stakes as he rolled to a decisive 1 1/2-length victory in the $558,000 Jim Dandy Stakes over a small but classy collection of three fellow 3-year-olds that included Preakness winner Early Voting.

“I like your word,” trainer Steve Asmussen said when “decisive” was mentioned to him. “It’s extremely rewarding, after off two tough races, to bring him back to the winner’s circle where he belongs.”

Epicenter, a son of Not This Time, was second in the first two Triple Crown races, but ran extremely well considering the brutal pace in the Kentucky Derby, and then, two weeks later at Pimlico Race Course, breaking slowly and running into traffic issues in the Preakness.

After his July 30 performance, when he charged home from last in the Grade 2 race, it surely made a strong case that the true Epicenter is, at least for the moment, the division leader he was acclaimed to be after clear-cut wins in the Grade 2 Twinspires.com Louisiana Derby and Grade 2 Risen Star Stakes Presented by Lamarque Ford made him the 4.10-1 betting choice in the May 1 run for the roses.

“It’s nice to get a little redemption here after the second-itis from the Derby and Preakness,” owner Ron Winchell said. “It feels good to be standing in the winner’s circle again.”

In four weeks for Epicenter, the next test will be the Travers where the classic 1 1/4-mile distance at the Spa will be the proving ground for a possible rematch with 80.80-1 Kentucky Derby winner Rich Strike and a meeting with anyone else who has their eyes on an Eclipse Award or the glittering $1.25 million purse.

“I didn’t expect [this track] to offer him any problems whatsoever, but it was a great relief for him to run his race over this track. Me and Ron have talked and we’ve had some good runs in the Travers, a couple of thirds and a second, but we’d love to win it,” said Asmussen, who sent out Winchell’s Midnight Bourbon for a runner-up finish in the 2021 Travers.

In front of a crowd of 37,476 on a day with $33.4 million in all-sources wagering, both Klaravich Stables’ Early Voting and Epicenter came into the 1 1/8-mile Jim Dandy off their races in the Preakness, and in the early stages the race looked like déjà vu from Baltimore. While Early Voting flashed his speed under Jose Ortiz, Joel Rosario and Epicenter came away from the gate behind the others and he was last of four, four lengths behind pace-setting Early Voting after an opening quarter-mile in :24.22.

“He broke well, but took a little bit of time,” Rosario said. “I just let him be where he was and happy.”

On the backstretch, after a half-mile in :48.28, when Early Voting led by two lengths and Epicenter was still last, Winchell became fidgety in his seat.

“I was a little nervous when he was laying in last,” Winchell said.

At the same time, Asmussen’s confidence was stoked by the way his colt bred by Westwind Farms was running comfortably while still in striking range.

On the turn, as Jeff Drown’s Zandon, who was making his first start since a third in the Kentucky Derby, and Peachtree Stable’s Tawny Port went after Early Voting, Rosario pushed Epicenter widest.

Still last at the top of the stretch, once Rosario kicked Epicenter into top gear he quickly reached the front at the eighth pole and the 11-10 favorite ($4.20) extended his margin to the finish line in a time of 1:48.99

“I think it gives us something going forward and that’s the important part,” said Asmussen, who won the Grade 1 Alfred G. Vanderbilt Stakes with Jackie’s Warrior in the previous race. “This was fabulous. What’s next?”

Zandon, a son of Upstart  who won the Toyota Blue Grass Stakes, was second by a half-length over Tawny Port.

“He was a little closer than he probably wants to run,” trainer Chad Brown said. “I don’t think [jockey Flavien Prat] had any other option.”

Early Voting, the 9-5 second choice who is also trained by Brown, dropped back to fourth, 1 3/4 lengths behind Tawny Port.

“This track has been tiring,” Brown said. “Clearly, Early Voting didn’t handle this track. We’ll see how he comes back.”

For Epicenter, it was his fifth win in nine career starts and raised his earnings to $2,270,639.