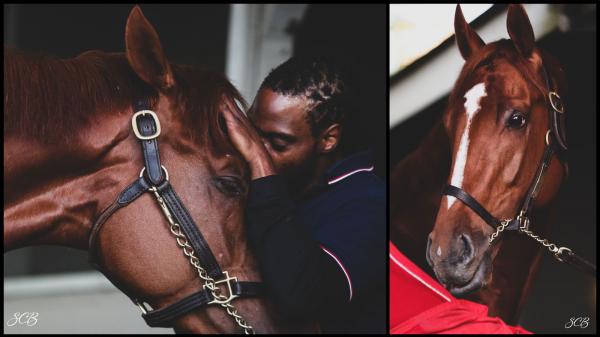 Rich Strike catapulted himself to the forefront of the American racing scene on the first Saturday in May this year. With a dramatic come-from-behind rally, he won the 2022 Kentucky Derby Presented by Woodford Reserve in a shocking 80.80-1 upset, making him the second-biggest longshot to win the race in history. His underdog status has made him a fan favorite. His trainer, Eric Reed, had won just one graded stakes race in his career prior to the Derby, while Sonny Leon, a top jockey in Ohio, won his first graded stakes race in the Derby.

Although Rich Strike bypassed the Preakness Stakes, he’s scheduled to run in the Belmont Stakes Presented by NYRA Bets on June 11. Our Isabella Leslie caught up with Jerry, Rich Strike’s groom, to learn more about the Derby winner.

What’s he like in the stall vs. on the racetrack: In the stall, he’s nice and calm, totally relaxed. His true personality doesn’t shine until he’s on the track. Then he knows it’s game time.

Tricks or Quirks: He likes to play with his lips and nose, but not when the cameras are around. He’s a little camera shy!