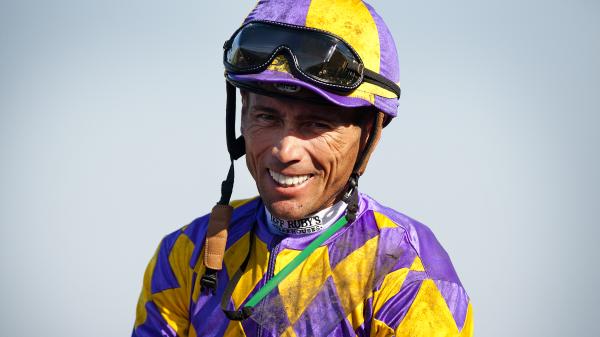 The year was 2006 and Ron Anderson, agent to the stars, was trying to determine his next move following the retirement of Hall of Fame jockey Jerry Bailey.

Although he had been contacted by a number of prominent riders seeking his services, nothing felt quite right. Then Julio Canani, a trainer based on the West Coast, called.

“Somebody here needs to talk to you,” Canani replied.

Anderson then quickly recognized the voice of Garrett Gomez, who asked the agent if he would consider representing him. The fit felt right almost immediately.

With Anderson working the barns and the phones from 2006 until he decided to relocate to the East Coast in 2011, Gomez took his career to rare heights. The native of Tucson, Ariz., who followed the footsteps of his father, Louie, by becoming a jockey, paced all North American riders in earnings from 2006 to 2009. He won Eclipse Awards in 2007 and 2008.

Gomez, who died on Dec. 14, 2016, at age 44, was never sharper than when he rode in the Breeders’ Cup World Championships. He won the Bill Shoemaker Award for the first of four times as the outstanding rider at the Breeders’ Cup in 2005 and notched his first two wins there with Artie Schiller (Mile) and Stevie Wonderboy (Juvenile).

His finest moment, though, arguably came in 2010. Despite competing with a severe injury to his right shoulder, he rattled off three victories. He took down the Juvenile Turf with Pluck and the Juvenile Fillies Turf with More Than Real. Then came the ultimate triumph, when he and Blame dug deep to hand the awesome mare Zenyatta her only defeat in a classic Classic.

“He was absolutely, positively a huge big-race rider,” Anderson said. “He stepped up to the moment and was extremely good on big days and in big races.”

Anderson, who currently represents Joel Rosario, believes Gomez can compare to any rider in that regard. “The numbers don’t affect them,” he said. “When they’re riding for a million bucks, it doesn’t affect them.”

When Gomez was inducted into the Racing Hall of Fame in 2017, Louie said his son was “born to be a racetracker.”

Every result mattered to Gomez in a career that extended from 1988 until 2013. His daughter, Amanda, said at the induction ceremonies, “I know he would want all of you to know that he remembered every winning horse that he ever rode.”

Gomez battled substance abuse issues for much of his career. He cited personal problems for taking off all of his mounts at Santa Anita in 2013. He used social media to announce his retirement in 2015.

“I would like to thank everyone in the sport of horse racing for all the support I received in my career. I’d like to apologize to my fans for leaving the sport the way I did. Sometimes you have to do things in life for yourself,” he said. “I’ve had a lot of awesome moments in this game. Best game in this world.”

Tragically, Gomez was unable to take care of himself as well as he tended to his mounts. Toxicology tests pointed to an overdose of methamphetamines as the cause of his death.

Note: This story was originally published in October 2018 and has been updated.