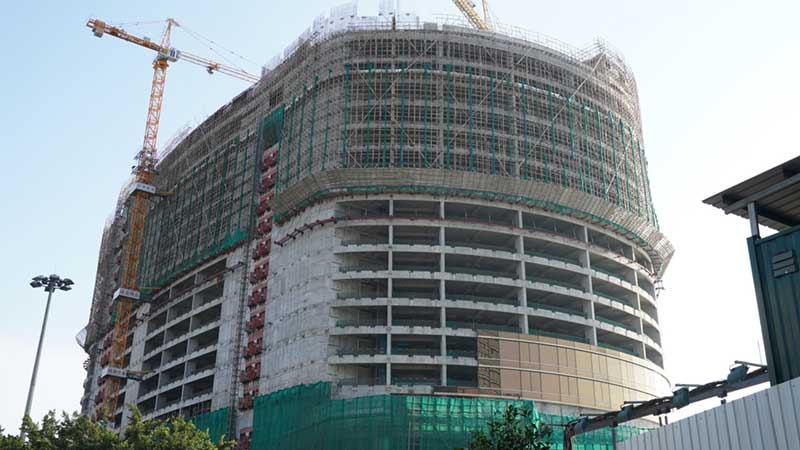 The Treasure Island Resort World in Macau is still under construction, but is already dealing with a tragedy. The property, which Genting Hong Kong previously backed, is a crime scene following a man’s apparent suicide there today.

The Treasure Island resort in Macau, shown under construction. A man took his life at the property this morning. (Image: Inside Asian Gaming)

A 50-year-old man, who was not identified, died today after apparently jumping from the top of the Treasure Island resort. The property, still under construction in Nam Vam Lake, is unique to Macau in that its development does not include a casino.

The Macau News Agency reports that the Macau Firefighter Corps received a report at about 9:30 local time this morning. It indicated that a man was calling for help and was asking for a team of crisis negotiators to arrive on the scene.

Police officers and members of the negotiation group arrived and started to talk to the man, who had climbed to the rooftop of the unfinished building. He suddenly bowed before the crowd at around 11:10 and it was apparent he was going to jump.

Firefighters rushed forward to help, but he didn’t give them a chance. He leaped to his death, with the entire incident caught on camera.

After some searching, rescue personnel found the man’s lifeless body in bamboo scaffolding located between the 13th and 14th floors. They retrieved him and transported him to the Conde S. Januario Hospital, where doctors pronounced him dead.

Reports indicate that the man was not an employee in the construction of the resort. However, not much else is known. An investigation is underway to determine his identity and to unravel the circumstances that may have led him to commit suicide.

Treasure Island to be a Unique Macau Destination

Treasure Island, which initially expected to open this June, is a unique property in Macau. It is among the first not to include a casino. This is in keeping with the Chinese national policy for Macau to diversify local tourism and move away from gambling.

Genting Hong Kong sold its interests in the complex in 2021 for US$95.85 million. At the time, the company planned on focusing on its cruise business. Unfortunately, that didn’t work out.

The property is preparing to enter trial operations this October, with a planned launch in December. It will offer a number of non-gaming amenities, including a UFC fitness center, an Under Armour store, a Beebeeland gaming center, and a Five Guys restaurant.

In addition, Treasure Island will have open-air, Japanese-style hot springs, a first in Macau.

2022-03-15
Previous Post: AP Moves Away from the Casino
Next Post: Texas Plan Comes Together For Forks Of The Paluxy In Mr Speaker – Horse Racing News