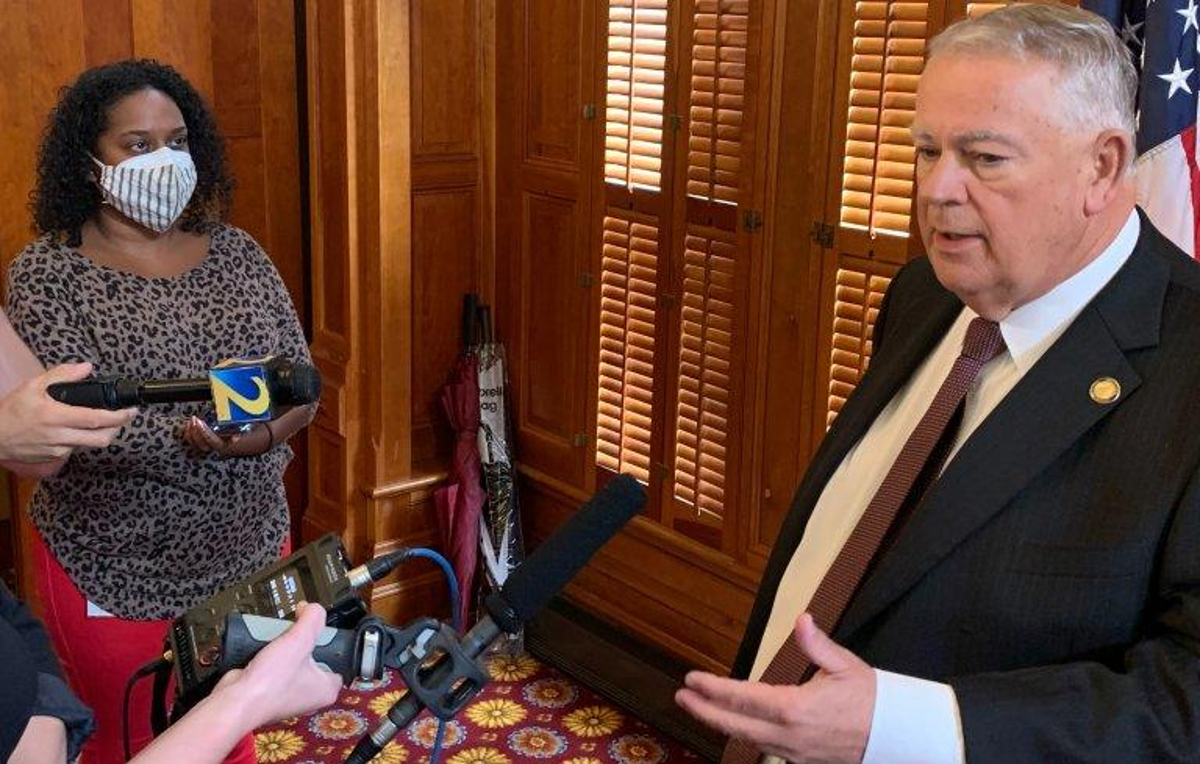 Georgia is in the minority when it comes to casino gambling. The Peach State is one of only seven that does not have even a single commercial or tribal casino. A top state lawmaker says 2022 could be the year the matter finally goes to the people.

Georgia House Speaker David Ralston meets with the media in 2020. The state representative says the odds are improving that 2022 will be the year Georgia lawmakers finally back an effort to legalize casino gambling. (Image: Georgia Recorder)

Georgia’s General Assembly is set to convene on January 10 for its 2022 legislative session. House Speaker David Ralston (R-Blue Ridge) feels it’s time for lawmakers to allow the public to decide whether or not Georgia becomes a casino state.

There is an appetite this session that I haven’t seen before to do something,” Ralston said today during a press conference regarding the upcoming assembly gathering.

Gambling in Georgia is currently limited to its state-run lottery. Efforts to bring land-based casinos to the nation’s eighth-most populated state have been unsuccessful in recent legislative sessions. But 2022 appears poised for yet another undertaking.

State Rep. Ron Stephens (R-Savannah) has been one of the leading advocates of the state holding a ballot referendum on casino gambling. “It looks more encouraging than ever,” Stephens said recently regarding the 2022 session.

Ralston believes the referendum necessity could be used as a valuable tool to gauge the public’s enthusiasm in legalizing casinos. The House speaker contends that such an initiative could help lawmakers determine how to expand gambling in the state based on input from the people.

“Maybe it’s time that we asked the question of Georgians whether they want to expand gaming, and if they say yes, then we sit down and decide what form it will take, whether it’s going to be sports betting, whether you do horses or destination resorts,” Ralston said.

To place such a question before voters, a bill must be passed with two-thirds support in both the Georgia House and Senate. Proposed amendments to the Georgia Constitution require only a simple majority support to pass during a general election.

Georgia’s lone gambling outlet — the lottery — benefits public education by way of the vastly popular HOPE Scholarship (Helping Outstanding Pupils Educationally) program. Since its debut in 1992, more than $24.2 billion in lottery proceeds have been directed to the State Treasury’s Lottery for Education Account, which oversees HOPE.

Georgia has the attention of many of the largest casino operators in the United States, including Wynn Resorts, Caesars Entertainment, Hard Rock International, and a Connecticut tribe that owns and operates Foxwoods.

The largest casino development pitch to be made in Georgia to date comes from Speedway Motorsports. The owner of the Atlanta Motor Speedway, home to two annual NASCAR Cup Series races, has expressed interest in investing over $1 billion. The goal is to transform the racetrack into a major hospitality and entertainment complex.

Speedway Motorsports and Foxwoods owner Mashantucket Pequot Tribal Nation have partnered on the proposal. Along with a 700-room hotel and 85,000-square-foot casino resort, the presentation includes a 300,000-square-foot mall, 11,000-seat concert venue, 400-unit timeshare, and a theme park.