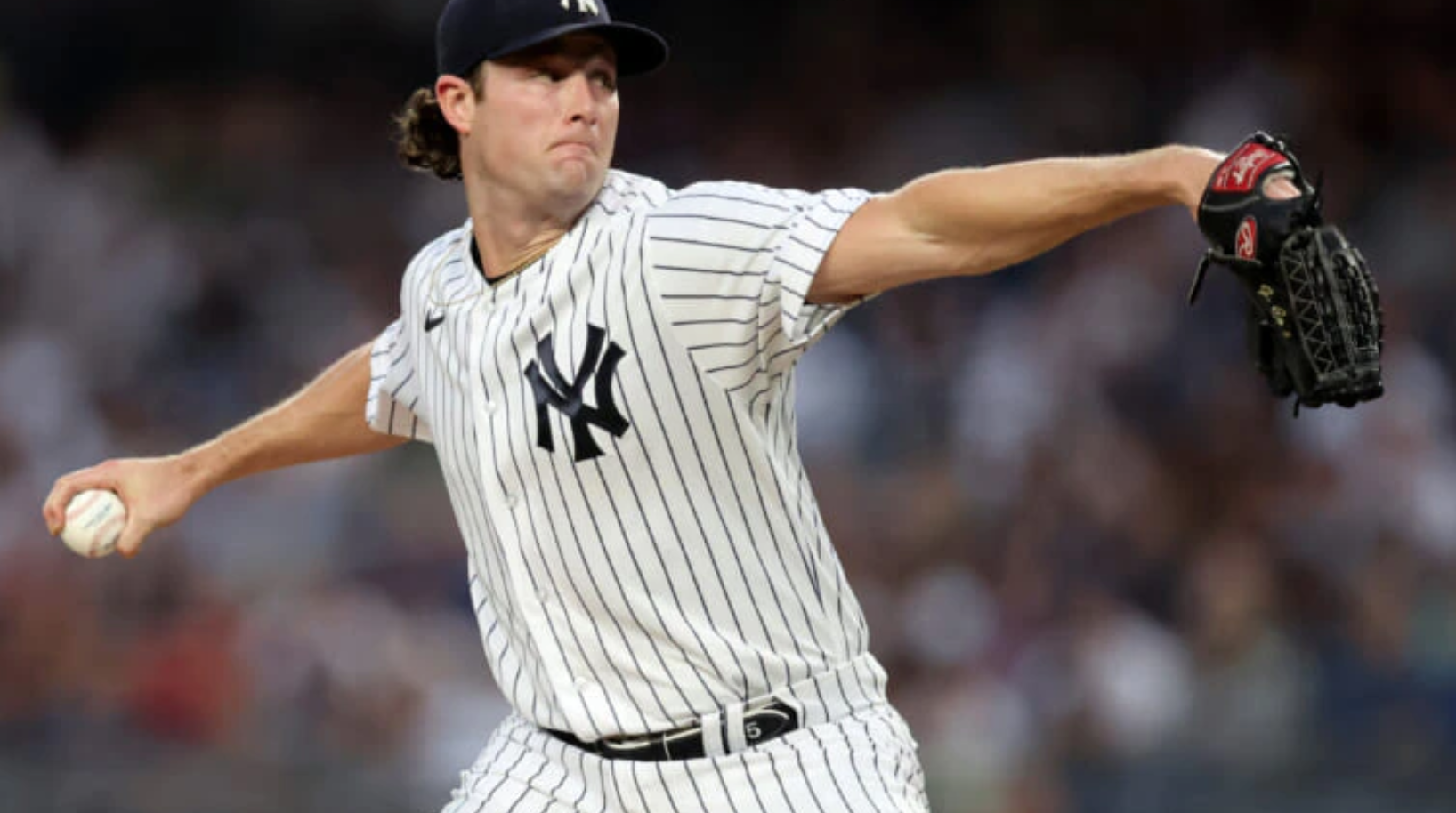 Clarke Schmidt was the relief pitcher the Yankees had on the mound last night trying to close out their pivotal Game 3 game against the Guardians in Cleveland. They were ahead by 2 runs, and needed only three outs.

Instead, the guy who is becoming a Guardians legend, Oscar Gonzalez, laced a two-run, game-winning single up the middle on a 1-2 pitch. That turned what had been a 5-3 deficit into a gut-wrenching 6-5 loss for the Bronx Bombers. The Yankees had been 167-0 when entering the ninth with a lead of at least two runs. Not anymore.

But these are the types of things that can happen when your bullpen is decimated by injuries and your designated closer, Aroldis Chapman, has been in exile after skipping a mandatory workout prior to the playoffs.

With two runners on base and one out in the ninth, manager Aaron Boone (who we pegged as an overthinker in a recent column) signaled for Schmidt. He immediately allowed an RBI single to Amed Rosario that made it 5-4, which was followed by an infield single by Jose Ramirez that put runners at the corners and raised the tension level to extreme heights.

Schmidt then had a three-pitch strikeout of Josh Nayler to leave the Yankees one out away from victory, and Schmidt got the count to 1-2 against Gonzalez before he made great contact on a pitch just below the knees on the outside corner. Gonzalez smoked it, two runs scored, and the entire city of Cleveland went nuts in another defeat of the Yanks that will go down in lore with the “midge game” in which a swarm of insects undid Joba Chamberlain back in 2007.

The Joba Chamberlain midge game in Cleveland in the 07 ALDS. https://t.co/OjORpxTVbq pic.twitter.com/sti51ilEh6

Boone has ace Gerrit Cole on the mount for Game 4 tonight after he went 6 1/3 innings in the opener, had eight strikeouts, and allowed only four hits while throwing 101 pitches in Game 1. Cole is on a $324 million contract and was signed to win ballgames like the one we are going to see tonight. Which is why the Yankees are favored by 1 1/2 runs despite being on the verge of elimination.

But Boone may have to ride Cole longer than he is comfortable with, because his bullpen is bereft of anyone resembling the likes of Chamberlain or Mariano Rivera. (Side note: The Nationals drafted Rivera’s son out of Iona College in 2015, and he played four years of minor league baseball before opening an auto repair shop).

So even if this one goes into the eighth or ninth inning with the Yankees ahead, no lead is safe the way it once was when the Yanks had dependable closers. Just take a look at how valuable Josh Hader has been to the San Diego Padres, who acquired him from Milwaukee over the summer and had him finishing off their closeout victory of the Los Angels Dodgers on Saturday. Or the Houston Astros, who got 22 strikeouts from their pitchers, including 15 by seven relievers, in eliminating the Seattle Mariners 1-0 in 18 innings to make it to the ALCS for the sixth consecutive season.

So three of baseball’s Final Four are set, and the Yankees are now the longest shot in the field (+950) to win the World Series. Houston is favored at +160, and the Padres are second at +270 after being +2500 a week ago. Yes, sports gambling brings quite a few odds swings, eh?

How Long Can Cole Last?

Cole lasted more than seven innings just once in 24 starts this season, and he had the Yankees’ lone complete game … but that comes with an asterisk, because it was a six-inning shutout of the Red Sox on Sept. 25 that was shortened because of rain. Cole has thrown four complete games in his three seasons with the Yankees, two in 2021 and two in 2020. If the Yankees need nine innings from him, will Boone allow it to happen? The guy has a quicker hook than a competitor at a Bassmasters fishing tournament.

Cole’s over/under for strikeouts is 5 1/2 (-140). Yankees fans have to believe that they are going to get a gem from their ace with a comfortable game-time temperature of 57 degrees (which might be perfect midge weather for the insects that hatch on the shores of Lake Erie at this time of year).

So in building a parlay, a Yankees fan would have to begin with that prop along with Yankees on the ML (-175), along with the over on runs scored of 5 1/2 (+220). After that, it is a matter of trying to discern who is going to be able to produce at the plate against Cleveland starter Cal Quantrill, who lasted only five innings in Game One and surrendered home runs to Anthony Rizzo and Harrison Bader.

His home run extends the Yankees’ lead to 4-1.

Nobody on the Yankees is hitting above .273 in this series, and Aaron Judge homered Saturday, but has eight strikeouts in 12 at-bats and is a risky proposition, especially after fans in the Bronx booed him off the field Friday night when he whiffed three times (some way to treat a guy who just broke the AL home run record and is going to be a free agent). Still, if the Yankees are going to win, you must assume the Judge can come up with at least one RBI, and he is +125 to have at least one.

Building a Parlay Based Upon Presumption of a Yankees Win

Harrison Bader has two home runs for the Yanks in this series after hitting none in 14 regular-season games after coming over in a trade with the Cardinals. So adding him appears risky. Josh Donaldson went 2-for-2 in Game 1 and thus seems like a safe prop bet, and he is +190 to have at least one RBI. Add in an over on Isiah Kiner-Falefa (who with Bader has a team-high three hits) to have at least one RBI at +260, and the parlay is up to seven legs. A $10 wager at odds of +4000 would pay $410, and there is nothing on that parlay card that seems extremely unlikely.

If you want to add in a home run by a Yankee (they have homered in 20 consecutive postseason games), Bader has two in this series and is +1400 to hit one. That would make your parlay eight legs, and the payoff on a $10 wager rises to +20000 for a $2,010 payoff. Your choice. Eight-leggers are tough, but the big sportsbooks put out press releases every Monday highlighting the unlikely wagers that actually hit, so take your chances is you really, really love what was once LeBron James’ favorite baseball team.

No Yankees cap this time. LeBron James was all about Cleveland at Game 2 of the ALDS. https://t.co/BhsTmGPePF pic.twitter.com/SvViumdnqf

The only sportsbook we could find that would take that particular parlay was PointsBet.com, which is one of the peculiarities of sports gambling in New York with only nine licensed operators, and very, very limited same-game parlay options.

But as we have noted before, shopping around when gambling in the Empire State is mandatory, and you will have to put aside your frustrations as you try to make these types of bets at bigger sportsbooks.

But a word of caution: Quantrill is 14-0 with a 2.88 ERA over 44 career games — 34 starts — at Progressive Field. So the Yankees will need to overcome that history, which ain’t going to be easy. Hence the $10 wager, which is a lot more enjoyable (and healthier) than spending that same $10 on a Big Mac meal.