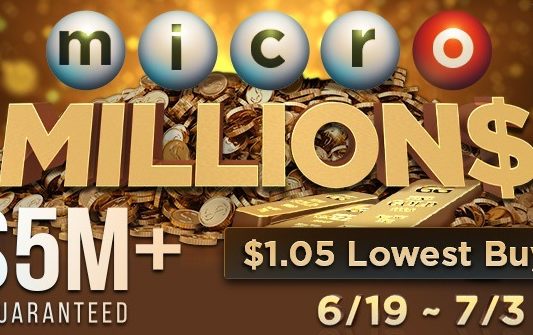 GGPoker has launched yet another online tournament series, this one featuring micro stakes events with $1 million guaranteed prize pools.

GGPoker has launched its own low-cost tournament series and given it a name that most players will be familiar with. (Image: GGPoker)

Not to be confused with an already popular series hosted by PokerStars, microMILLION$ (stylized for clarity) has a $5 million guarantee and dozens of low-cost MTTs.

The action begins on June 19 and finishes on July 4 with the finales of two, $1 million-guarantee tournaments that cost a grand total of $35.50 to enter.

GGPoker giving away thousands of tickets to microMILLION$

The two $1 million-guarantee events are the proverbial stars of the show, but the two-week run of tournaments will have something for everyone. In addition to buy-ins starting at just $1.05, there are also satellites and daily freerolls.

In fact, it’s the daily freerolls that bring something unique to this series. They’re unique because GGPoker is giving players who finish outside of the money a ticket for the following day’s freeroll satellites.

That equates to more than $100K worth of freeroll value available through the series, which means players will always have a second chance to cash in a microMILLION$ event.

Low-cost online events are nothing new. PokerStars ran its first MicroMillions in 2012, creating a series that’s grown in popularity and broken multiple records over the decade. Over the last few years, PokerStars’ MicroMillions has been crowned the largest poker series online.

Therefore, the market for small-stakes MTTs is clearly there, which is why the team at GGPoker has launched another series.

GGPoker has climbed to the top of the online rankings over the last three years through a combination of innovation and, at times, imitation. The latter is often described as the sincerest form of flattery, so the people at PokerStars can take solace from the fact microMILLION$ appears to have been inspired by their idea.

However, GGPoker has upped the ante. When comparing the two series, GGPoker’s $5 million guarantee is $500K more than PokerStars’ $4.5 million MicroMillions guarantee. That could be seen as another case of one-upmanship from GGPoker.

But it’s also worth remembering that PokerStars’ MicroMillions has surpassed its guarantee multiple times over the last decade. Therefore, if GGPoker wants to become the dominant force in small-stakes MTTs, microMILLION$ will need to beat its $5 million guarantee.