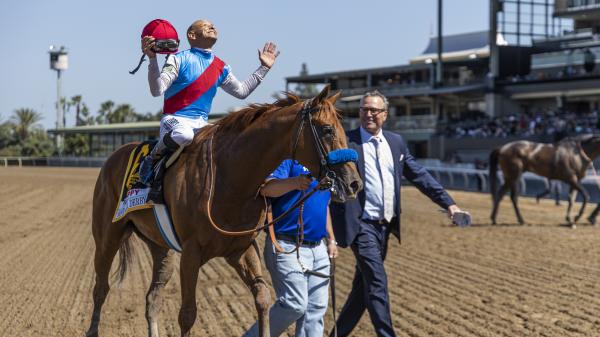 Tom Pedulla is interviewing prominent owners, trainers, and jockeys as they travel the Road to the 148th Kentucky Derby Presented by Woodford Reserve on Saturday at Churchill Downs.

Hall of Famer Mike Smith, one of the most accomplished jockeys in the history of the sport, is featured in the final segment of this year’s series. Smith is known for his ability to deliver when the stakes are highest. He rode flawlessly when Justify swept the Triple Crown in 2018.

Smith will ride Taiba, who may make up in ability what he lacks in seasoning. The $1.7 million colt, unraced at 2, created a buzz when he captured the Runhappy Santa Anita Derby in only his second career start. Smith participated in a question-and-answer session conducted on behalf of America’s Best Racing:

PEDULLA: I know John Velazquez rode Taiba in his first start. How did it come about that you rode him in the Santa Anita Derby?

SMITH: I had been on him as a 2-year-old when he first came in. I had worked him before. John had come into town and was riding almost everything for Bob, so he rode him first time out. But when things changed (Taiba was moved from the barn of suspended trainer Bob Baffert to Tim Yakteen) and Mr. Zedan wanted to go ahead and try him in the Derby, they already had Messier in there and, of course, Johnny was riding Messier. When they decided to put Taiba in, I was blessed enough to be the guy who got the call.

PEDULLA: What instructions did Tim give you before that second start?

SMITH: That’s the thing about riding for good trainers, they don’t give you too many instructions. They let you play the race out the way it shapes up.

PEDULLA: Was Taiba very responsive to you?

SMITH: That’s what I really liked about him. He was quick leaving there. He was really intelligent. He listened to everything I wanted him to do. As soon as I let him know I wanted him to sit off the top two, he was just happy to do it. But then when I called on him to stay where I wanted him to stay, he jumped right back into the bridle. That’s a credit to the connections and the people who have been working with him.

PEDULLA: It looked as though he relaxed well for you.

SMITH: Very well. He relaxed very well. He showed he’s not a need-the-lead type. He can sit off of it. And that’s very important to have.

PEDULLA: Were you surprised that he won the Santa Anita Derby?

SMITH: I knew he had the talent. We all knew he had the ability. Messier and Richard Mandella’s horse, Forbidden Kingdom, are extremely talented horses. For him to beat them the way he did, off of just one race, that was what was amazing. He felt to me the best part of his race was at the end. He was just finding another gear going a mile and an eighth and finish on out if I wanted him to. He was supposed to be on fumes going down there. But there was a lot of energy there, a lot of horse left. I would take the same race back. But can you imagine if that race moves him up?

PEDULLA: I know it is asking a lot, but does anything about this horse remind you of Justify?

SMITH: Well, the simple fact that they are beautiful chestnuts and they are both extremely, extremely talented and very intelligent at this stage of their career. Both of them did not start as a 2-year-old. So, there are a lot of similarities. He sure has a lot of shoe to fill before you can compare him to Justify. But he’s got that kind of ability and he’s that kind of horse. So, we’ll see.

PEDULLA: What are the keys to winning the Kentucky Derby?

SMITH: Well, you’ve got to have a very talented horse, a horse that can get the distance, a horse that’s really handy. It’s always good to have a horse that has a high cruising speed but yet he can sit off of them. And that’s what Taiba has. You don’t have to worry about getting past 19 other horses if you are in contention right away or where you want to be as far as pace goes.

PEDULLA: What does it mean to be in the Derby? Does it still have a lot of meaning for you?

SMITH: Without a doubt, no matter what stage you are at in your career, whether you are at the beginning of it or the middle of it. But I think even more so when you are at the end of it because you understand you are not going to get many more opportunities, so you certainly want to make the most of them. There is nothing like the feeling of being in the Derby, but especially if you’ve been blessed enough to have won it before. There is nothing like that feeling. The only way you’re going to get that feeling again is to do it again. And that’s what I want.

PEDULLA: What is it about big races that seem to bring out the best in you?

SMITH: I’ve been fortunate enough and blessed enough to be on really talented horses. These big races, I don’t know, man, they take me to another level of focus and concentration. I don’t know what it is, but I just seem to thrive on them and I pray I continue to do so.

PEDULLA: What do you attribute your longevity to?

SMITH: Really taking care of my body. I started at a young age. Since 1989, I’ve been in the gym, working out on my days off, learning how to do it and learning more about physical fitness and hiring the right personal trainers to train me. I made it a way of life instead of taking days off and just relaxing. Mentally, I feel it gives me an edge. Whether it really does or not doesn’t matter. I feel it does. I can do as much as I was able to do in my 30s. It’s crazy.

PEDULLA: What would it mean if you could surpass Bill Shoemaker to become the oldest jockey to win the Derby?

PEDULLA: Does your gut tell you that you’ve got a big shot?