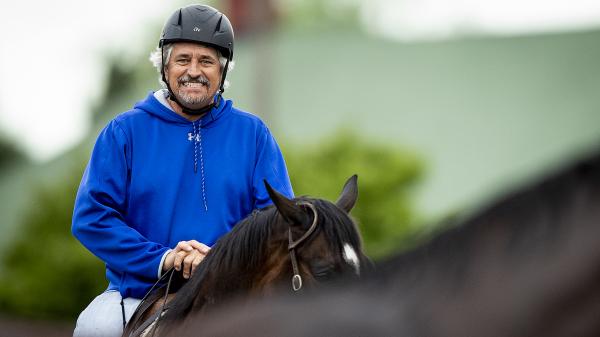 Hall of Fame trainer Steve Asmussen owns more than 9,700 victories since he produced his first winner at New Mexico’s Ruidoso Downs in 1986, a North American record that may be untouchable when he is done.

Asmussen, the all-time leader in victories at Churchill Downs, has won the Kentucky Oaks twice, with Summerly in 2005 and with Untapable in 2014.

And yet, for all of that winning, the big one has gotten away. He is winless with 23 starters in the Kentucky Kentucky Derby Presented by Woodford Reserve and, yeah, that drought cannot end soon enough.

“I need to win it,” Asmussen said as he stood outside his bustling barn at Churchill Downs. “Trying to be completely accurate, I think it’s going to happen. The opportunities I get, the horses we have, I wouldn’t bet against me winning a Derby. I don’t think that would be a safe bet.

“With that being said, I want to win it now. I want to work on multiples.”

Asmussen believes he has his best shot to date with Winchell Thoroughbreds’ Epicenter. The bay son of Not This Time prepped for the run for the roses by leading at every call to win the Risen Star Stakes Presented by Lamarque Ford by 2 ¾ lengths. He displayed all-important versatility when he rated kindly for regular rider Joel Rosario before taking control of the Twinspires.com Louisiana Derby by 2 ½ lengths on March 26.

Asmussen does not attempt to conceal his excitement. “In reality, he’s a horse that’s running faster before the Derby than any previous participants we’ve had,” he said. “With that, of course your expectations are higher.”

The native of Gettysburg, S.D., has had big shots before. Although Curlin emerged as Horse of the Year in 2007, a lack of seasoning may have contributed to a third-place finish in that year’s Derby. The late-blossoming Gun Runner had not yet found his best stride when he ran third in 2016.

“Honestly, I walked over expecting them to win on the day,” Asmussen said. “And they didn’t.”

Asmussen got everything he could from his two runners-up in the Derby. Nehro missed by 2 ¾ lengths against surging Animal Kingdom in 2011. Handicappers are still scratching their heads as to how 33-1 Lookin At Lee got to within the same margin of Always Dreaming six years later.

All 23 starters have their tale. As much as Asmussen yearns to break through, he hopes fans understand the magnitude of the accomplishment merely to advance to the Derby with a 3-year-old that has yet to fully mature physically or mentally.

“I have been extremely fortunate to train some horses for some lovely people who were so proud to be running a horse in the Kentucky Derby. That should not be lost on anybody,” he said. “I don’t want to see my 0-for-23 number and say ‘win or bust’ because it is so much more of an event than just a race.”

Asmussen, 56, is renowned for his attention to detail. His horses are as prepared as they can be for any race, whether it be a major stakes or the lowest-level claiming race on the card.

“No one I’ve been around trains the way Steve does,” said Eddie Martin, Jr., a winner of more than 4,000 races who now serves as an exercise rider in the barn. “Most trainers do the same routine day in and day out. I can see how the horse would get a little sour to what they’re doing every single day. Our horses are doing something new every day. That keeps them fresh and on their toes.”

Despite overseeing a far-flung operation, Asmussen is somehow in tune with the needs of each individual. One size does not fit all.

“He knows every horse like the back of his hand,” Martin said. “He must eat, sleep, and dream them freakin’ horses.”

Asmussen’s current Derby quest has led to at least several sleepless nights that can be documented. Martin watched his employer celebrate in the winner’s circle after champion Jackie’s Warrior took the Count Fleet Sprint Handicap at Oaklawn Park. He fell asleep immediately after that because he knew Epicenter and undefeated Longines Kentucky Oaks contender Echo Zulu faced key workouts the next morning at Churchill Downs.

Martin was shocked to see Asmussen arrive at Churchill at 5:30 a.m., in ample time to make certain the workouts went flawlessly.

“I said, ‘He had to come on a private plane.’ Not,” Martin said. “That SOB drove all night and he did it more than one time. How he does it? I don’t know. I couldn’t. I would have to pull over and sleep in a rest area or something.”

Given Asmussen’s hard-charging nature, there would be no rest if, and very likely when, he earns his first Derby win. On to multiples.