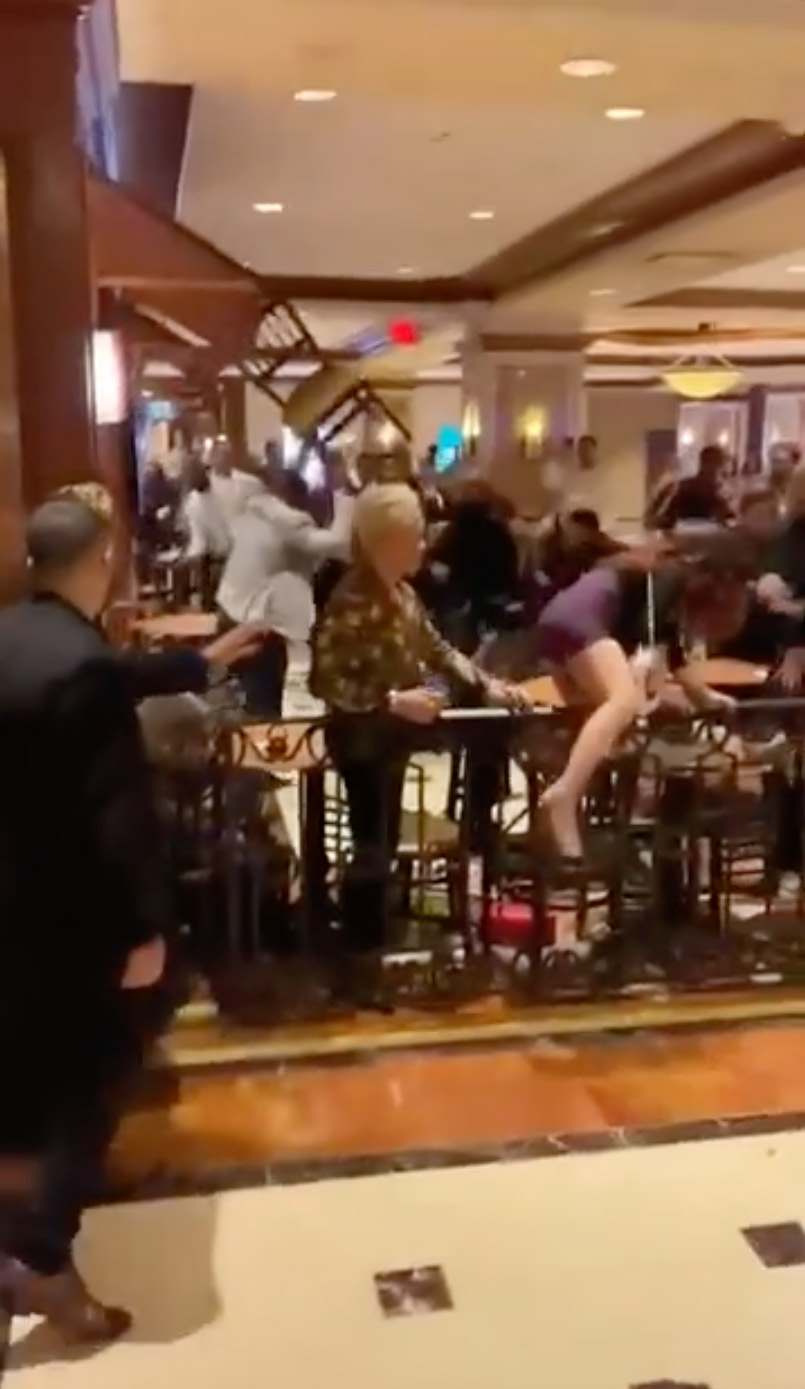 One person continues to recuperate from a violent brawl early Tuesday morning at Harrah’s Resort Atlantic City. The victim was treated at nearby AtlantiCare Regional Medical Center.

Harrah’s Atlantic City violent fight, pictured above. At least one person was injured and no arrests were made after Tuesday’s struggle. (Image: New York Post)

The injuries were not believed to be life-threatening, Atlantic City Police Lt. Kevin Fair told The Press of Atlantic City on Friday. It was unclear if the injured person was released from the hospital by later in the week.

No arrests were made during the melee in an eating area at the gaming property. That is because none of those in the struggle wanted to file a complaint with cops, local police explained to the New York Post.

Even so, several participants in the struggle were thrown to the floor and punched. One assailant used a chair to injure another person.

The fight broke out at about 3 am Tuesday, the Press reported. Security guards were seen standing near the fight monitoring the struggle and later straightening knocked-down furniture, a video posted on social media on Friday showed. Some 23,000 viewers watched the video on Twitter as of late Friday.

One social media poster, identified as “Vinny,” commented, “Looks like a regular day in AC to me.” Another poster, “Craig Bass,” added, “Round of applause for those security guards.” And “Hugh McKillop” said, “Even the security guys r [sic] like I[’]m not getting in the middle of this. Lol”

The fight ended by the time Atlantic City police arrived at the casino-hotel.

The melee erupted after mortgage companies sponsored parties in Atlantic City, the Post said. Several hundred mortgage company employees were in the city for an event, the Post revealed. But it was unclear later in the week if those in the struggle were connected somehow to the gathering, the Post adds.

Casino.org reached out to Harrah’s and parent company Caesars Entertainment for details and comments on Friday. Company officials did not immediately respond to the request.

Atlantic City is no stranger to crime in and around the casinos. In October, a fatal shooting took place near New Jersey’s famed boardwalk. It left a 35-year-old man dead.

The crime scene was close to several gaming properties and hotels. The location was adjacent to a budget motel, cheekily called Hotel Cassino. Less than a half a mile away are Caesars Atlantic City and the Wild, Wild West Casino.

In May, two New York City men were indicted by a New Jersey grand jury. They allegedly stabbed two males during a mass brawl at the Tropicana Hotel and Casino in Atlantic City in July 2020.

Both victims survived the attacks. It is unclear how the suspects’ cases were adjudicated.

Let’s check in on Harrahs Atlantic City (video from a friend)…. pic.twitter.com/Wj3pVyEjVN