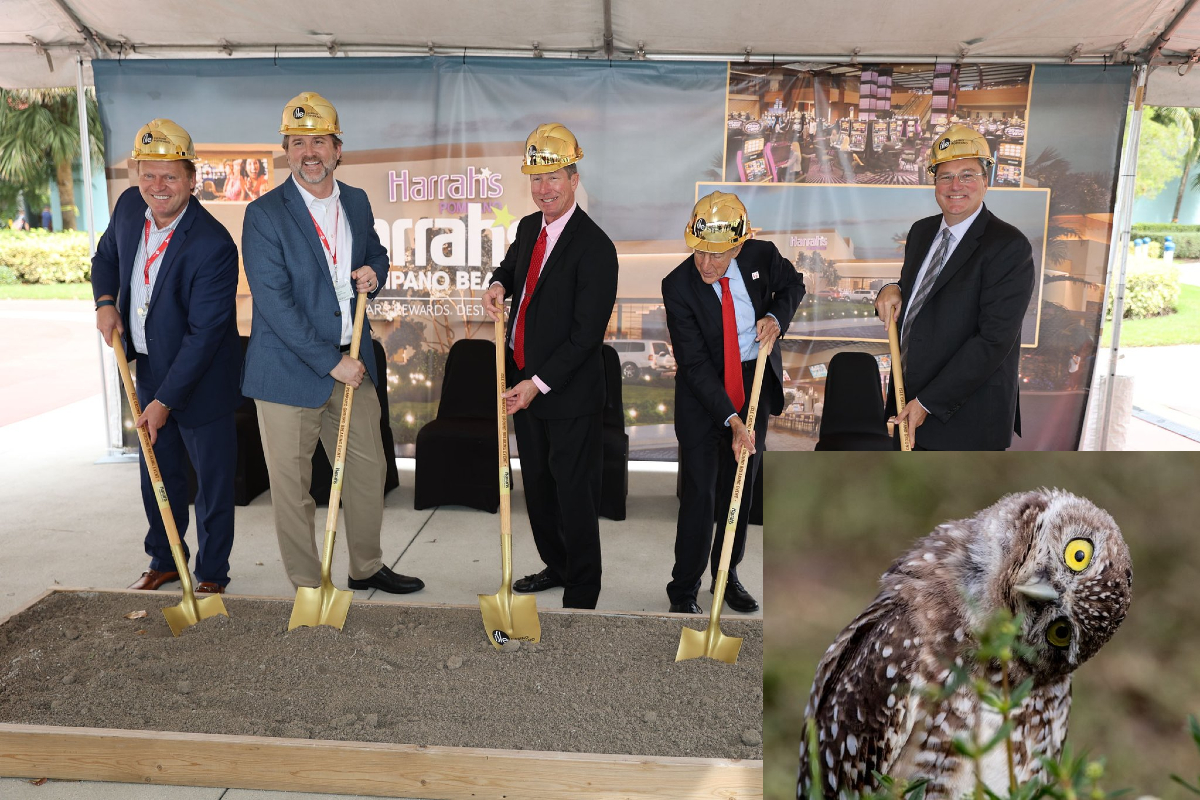 Caesars Entertainment officials hold a ceremonial groundbreaking in February on Harrah’s Pompano Beach. Some locals are concerned that the expansion project and rebranding of Isle Casino Pompano Park will result in burrowing owls losing their natural habitat. (Image: Caesars Entertainment)

Caesars Entertainment acquired the Isle Casino some 35 miles north of Miami through its merger with Eldorado Resorts in 2018. After 58 years of live racing, Caesars shuttered harness racing at the storied track earlier this year.

The Las Vegas-based gaming giant plans to use the former horse racetrack and accompanying stables and training grounds to expand the Isle Casino and bring in new amenities. Plans include a four-level, 580,000-square-foot parking garage with 1,500 spaces, plus a 12,500-square-foot smoking terrace with gaming machines.

The interior of the current Isle Casino will undergo an extensive renovation and name change to the iconic Caesars brand.

Some workers who were laid off because of the Isle’s cessation of live harness racing have since expressed concerns that the new construction threatens the property’s native owl population. Speaking this week with Local 10 News, former track employee Nancy Schaut says many burrowing owls, which are considered a threatened species in Florida, call the roughly 220-acre casino property home.

This is [more than] 200 acres of land that is being taken away from the owls,” Schaut said. “What I’m worried about is they are going to be left homeless or hurt or killed. I am very concerned.”

The Cordish Companies, which is bringing its Live! brand of entertainment districts to the forthcoming Harrah’s Pompano Beach casino resort, has assured Schaut that it will take steps to try and preserve the burrows on the racetrack.

According to the National Audubon Society, the burrowing owl population has been declining for many years. The conservation society says a major reason is because of habitat loss.

Once the Isle Casino Pompano Park is no more and replaced by Harrah’s Pompano Beach, the destination will include more than 100,000 square feet of gaming space with 750 slot machines and electronic table terminals, plus 30 live dealer tables and simulcast wagering.

Live! Pompano, as the Cordish component will be called, will come with a new Tri-Rail commuter line station operated by the South Florida Regional Transportation Authority. The public transportation link will serve commuters to Harrah’s Pompano Beach from Palm Beach, Broward, and Miami-Dade counties.

Construction on the major expansion and renovation began back in March. Caesars officials say they hope to have the parking garage, interior renovations, and gaming terrace completed by the end of the year. Cordish has not yet publicized a target opening date for Live! Pompano.