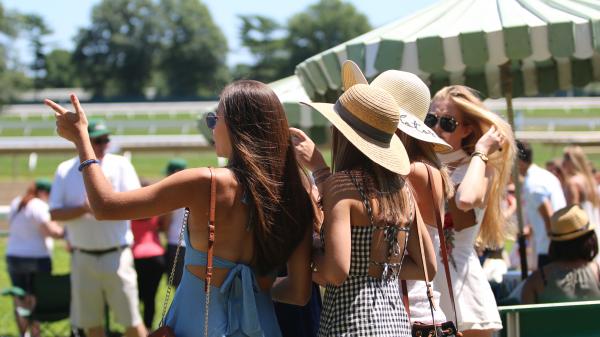 Horse Racing at the Jersey Shore is back this summer, and new for 2022 is Haskell Preview Day on June 18. There are four stakes races on Monmouth Park’s 14-race card, and each of them is a stepping stone for another stakes race on the TVG.com Haskell Stakes Day card July 23. The horses in this Saturday’s stakes are getting a test run around the Monmouth racetrack, and for some, defending their titles in a particular race. The last four races on the card are these aforementioned prep races, and all of them but one are graded stakes events. Here are my must-uses for the late pick 4 ticket (a bet where bettors must select the winners in each of the last four races). Using ABR’s handy Gambling Calculator, constructing this ticket with a .50-cent minimum equals a total investment of $4.

She’s winless since September 2021 but has faced some tough competitors. She had a bit of a tough going in the Grade 1 Matriarch Stakes in southern California back in November and has been off since then. Her last win came when jockey Florent Geroux was riding, and he is back aboard Saturday. She won the only race she ever ran across the Monmouth Park turf course, and she’s looking to go 2-for-2 in the Eatontown.

Don’t we all love a good pair of fluffy socks? This filly has much more to offer than a good name. She posted a great second-place finish in her last race at Churchill Downs, the Grade 3 Modesty Stakes Presented by TwinSpires, where she was beaten by her stablemate Bleecker Street. She won’t face that opponent today and draws the far outside, so her jockey Manny Franco has some options.

This guy’s two-race win streak was snapped in his last race, the Grade 3 Peter Pan Stakes, where he faced an ultra-tough group of runners and was absolutely no match for the winner, We The People. Still, he put forth a valiant effort in the Peter Pan and is the likeliest winner in this race.

These connections had an upset winner in the Cliffhanger Stakes back in late May at Monmouth Park and I won’t make the same mistake twice leaving them out of a ticket. This horse ran in the Kentucky Derby Presented by Woodford Reserve last year and will make his fifth career turf start Saturday. In his last race at Churchill Downs, he took an awkward step going into the first turn and was far back throughout the whole race. Approaching the lane, he was very wide and made an explosive move to finish third. He is likely to improve from that effort and although he is facing some nice horses in this group, I think he can win this race at a price.

Carrying a career bankroll of over $700,000, this 7-year-old cannot be ignored. He competed in a Grade 2 event last out where the winner controlled a very slow pace and Sacred Life was left with too much to do down the lane, finishing second. The connections of trainer Chad Brown and rider Manny Franco scream that this horse will be very popular at the betting windows.

“Chuck,” as his connections have coined him, has everything in the world going for him in this race. He’s had a bit of a break since his runner-up effort in the Group 1 Dubai World Cup Presented by Emirates Airline and his connections have their eyes on the Longines Breeders’ Cup Classic in the fall. The Salvator is truly a great spot for “Chuck” to make his comeback in, as he’s already ran on the Monmouth Park main track in a race you may remember – when he put his nose down first in the TVG.com Haskell Stakes last year against Mandaloun but was ultimately disqualified due to interference. He’s strictly the horse to beat here.

A bit of a wild card here with this pick. The last time Mind Control ran the one-mile distance he was a winner, in a stakes race at Parx back in September 2021. His last start in a Grade 1 May 7 at Churchill Downs was won by super-horse Jackie’s Warrior, who could win a race running backwards. There is no Jackie in this race, but there is Chuck… and if anyone could give Chuck a run for his money, it would be this guy.