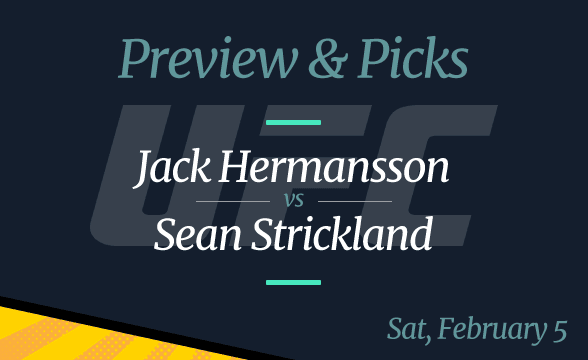 Jack Hermansson vs Sean Strickland is the headliner fight of UFC Fight Night 200. The middleweight bout is taking place on Saturday evening at the UFC Apex in Vegas. Oddsmakers see Strickland (24-3) as the favorite against Hermansson (22-6).

All odds are per FanDuel as of February 1.

From May 2018 to September 2019, Hermansson was one of the hottest topics in the UFC, having won four big fights. His run started with a technical knockout win over Thales Leites, after which he defeated Gerald Meerschaert and David Branch, both by submission.

He bounced back in July 2020 with a win over Kelvin Gastelum, before getting to fight surging Marvin Vettori in another headliner. The event in question was UFC Vegas 16, and after five rounds, Hermansson lost by points.

In May 2021, Hermansson fought Edmen Shabazyan, winning by decision in what was his most recent fight. Some eight months later, it’s time for Hermansson to fight again.

The reason why online sportsbooks see Strickland as the betting favorite is that his recent record is fantastic. He won his previous five fights, two by TKO and three by points. Still, none of his opponents were as good as his next foe.

This, however, doesn’t mean he has no experience fighting against elite fighters. For instance, in April 2017, Strickland fought Kamaru Usman, the current UFC Welterweight Champion, as well as the man who’s sitting in the #1 position in the UFC Pound-for-Pound Ranking.

Still, back when he fought Strickland, Usman was just starting his UFC journey. Before that fight, he was 9-1 in his pro career.

Knowing all this, you shouldn’t be surprised if Strickland ends up losing on Saturday evening. He might be in a great run, but his opponent has more experience fighting at a top-level.