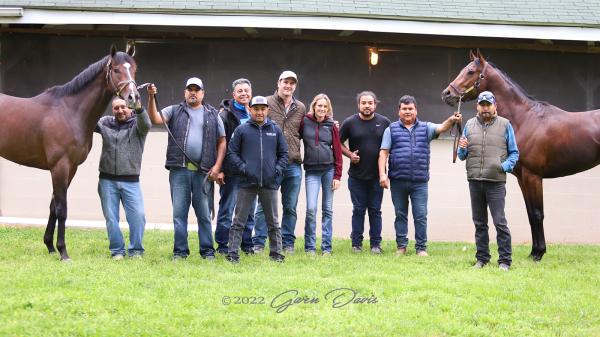 It’s called “The fastest two minutes in Sports.” Twenty horses gather in the starting gate on the first Saturday in May for the Kentucky Derby. Time seems to freeze as jockeys, horses, and everyone else waits with bated breath for the gates to open. Each horse represents a journey. A triumph over the odds. The result of midnight dreams. The culmination of a selected breeding program. The completion of schooling and training. The consequence of careful daily care. The production of a horse who has already beat the odds to run for the roses.

In 2019, there were 20,433 foals born in North America.  Renowned Calumet Farm in Lexington, Ky., welcomed a joyful foal with a sunny disposition on March 17.  In Thoroughbred circles, he would be regarded as regally bred. His sire is Oxbow, and his dam is Tapitstry, by Tapit. Oxbow (trained by D. Wayne Lukas and bred by Calumet) is known for winning the 2013 Preakness Stakes followed by a second in the Belmont Stakes. Calumet Farm resonates with Thoroughbred history. They are a significant part of the Derby history with winners Whirlaway (1941), Pensive (1944), Citation (1948), Ponder (1949), Hill Gail (1952), Iron Liege (1957), Tim Tam (1958), and Forward Pass (1968). Whirlaway and Citation won the Triple Crown.

Eddie Kane, Calumet’s general manager says that Tapitstry is a “nice, easy-going mare. The foaling was uneventful. As a foal, he was a pretty good little baby. Correct. We put playful nicknames on a lot of these foals, and we nicknamed him Jack as a baby. We told Mr. Kelley that and he asked, ‘Is he a happy horse?’ I said, ‘Yes.’ He said, ‘When we get to start naming them, I’m going to name him Happy Jack.’ ” (Note: Brad Kelley is the owner of Calumet Farm.)

He was sent to Cash Asmussen in Laredo, Texas for his schooling. “We have had horses with Doug O’Neill in the past. Mr. Kelley decided to divert Happy Jack to him based on his tremendous success with Hot Rod Charlie (also sired by the Calumet stallion Oxbow). That’s how Happy Jack ended up in California.

“When Happy Jack drew into the Derby, it was the accumulation of what we do here. It is every breeder’s goal to get into the Derby. It’s nice to buy a horse, but to breed one, raise it, and get to the Derby? That’s a pretty good accomplishment. Mr. Kelly’s mindset is if you are not entered, you can’t win. Hopefully, he shocks the world on Saturday!”

Trainer Doug O’Neill is going for his third Derby win with Happy Jack. He won with I’ll Have Another in 2012 and Nyquist in 2016. He is delighted with Happy Jack’s progress. Jack has been in their barn for almost a year. “He came with high hopes before we even saw him. We were excited before he even arrived, and he didn’t disappoint. He is a really nice, big, sound, athletic dude.

“He is very sociable. He loves people. He travels well. He’s one of those [horses] that you have to go peek in on him to make sure he is still there. He is a super-easy keeper. We put him in his stall after cooling out and he lies down. He is a true athlete.”

Happy Jack has caught Al Adiyat magazine editor and North American photographer Michele MacDonald’s eye. “He seems clearly eager to do more, yet he’s listening to rider Tony Romero and using his body to power through his exercise. He looks fit and is carrying good condition.  Very handsome!”

O’Neill is following a pattern that he set up in 2016 for Derby winner Nyquist. He shipped Happy Jack to Keeneland a week in advance to train and settle in. “We’ve had some good fortune doing this before. We did it with Nyquist where we came here and did our final prep. It’s so quiet; the track’s got a good cushion so it’s a little bit demanding, which we think they get a little bit better exercise out of it.”

One way to spot Happy Jack right away on the track is his unique martingale. O’Neill explained that “the guys do that with electrical tape so it’s easy to pick him out. Sometimes when you are on the back side and the horse is on the front side, it makes it easier to pick him out with the white electric tape spaced every few inches on the martingale.”

Is Happy Jack a happy horse? Sharla Sanders, operational manager for Doug O’Neill, thinks that he is. “Happy Jack is aptly named. He’s starting to come into his own at the right time. He’s like the boy at the school dance in the background but he’s ready to shine on the larger stage. He’s always a sweetheart in the barn and a pleasure to be around.”

O’Neill is “grateful and honored to be training for Calumet Farm with their rich history as the all-time winning owners of the Kentucky Derby. The Kelley family now owns and runs that amazing facility. To me, Happy Jack is an exciting horse. He is a grinder. In a race like this, if you get a good trip going a mile and a quarter, you need a grinder. We know he is going to be a big price, but he has shown us in the morning that he has the ability to compete at a high level.

“Calumet is not afraid to swing for the fences. Mr. Kelley is a sportsman and a horseman. He loves his horses. When they are doing well, he likes to give them an opportunity to show their stuff against a top-class field. I don’t think Happy Jack is going to disappoint us. He will give a really good effort. He is a strong individual. A good-size colt who has really been thriving. He put in a tremendous work at Keeneland. He has tons of stamina. Our jockey, Rafael Bejarano, was wowed by him last week.”

The Kentucky Derby is a great place for dreamers to swing for the fences.  Sometimes a longshot will win. That’s the beauty of horse racing. Leandro Mora, who is O’Neill’s long time right-hand man puts it succinctly. “Jack is happy. And when Jack is happy, we’re all happy.”