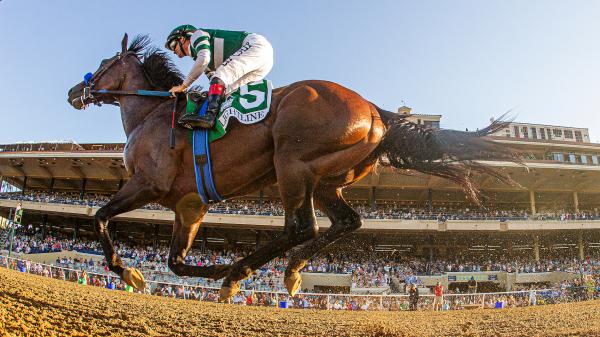 Flightline improved to 5-for-5 with an absolutely dominant 19 ¾-length runaway win in the Grade 1, $1,000,500 TVG Pacific Classic Stakes Sept. 3 at Del Mar. The Pacific Classic is part of the Breeders’ Cup Challenge Series, so Flightline earned a “Win and You’re In” expenses-paid berth in the Longines Breeders’ Cup Classic Nov. 5 at Keeneland via his Pacific Classic victory. But he also set social media ablaze as analysts and fans attempted to quantify this performance and Flightline’s overall credentials.

From the metrics used in horse racing to evaluate performance – speed figures – Flightline’s Pacific Classic and five races to date are akin, for example, to the dominance shown by Wilt Chamberlain, Michael Jordan, and LeBron James to start their careers and at the peak of their ability. Based purely on speed – and Flightline is exceptionally fast – we’re talking pantheon-type type natural talent like Aaron, Ruth, and Mays in Major League Baseball …  of course, minus the longevity that made those three among the best to ever swing a bat. Let’s dig a little deep into Flightline’s meteoric ascendance and, later, his chances in the Breeders’ Cup Classic.

There is a common lament from horse racing analysts, myself included, that superlatives like great, brilliant, and superstar are doled out far too often. I’m admittedly guilty myself of the very same thing I frequently critique (you need only look one paragraph above), but after last weekend’s Pacific Classic performance even the most skeptical analysts agreed that Flightline’s obliteration of five opponents warranted the loftiest of praise.

Entering the 1 ¼-mile race, there was one obvious reason to resist buying the intense hype on this Breeders’ Cup Classic hopeful: not only had he never raced at that distance before, Flightline had never competed in a race longer than one mile and had never even been asked to race around two turns. Sure, he was exceptionally fast, but nobody knew for sure if he could carry his speed 1 ¼ miles. Now we know …

Flightline pressed the pace through a half-mile in :46.06, led by a length after three-quarters of a mile, and opened up a 10-length advantage after a mile. The 4-year-old Tapit colt extended that lead to 13 lengths in early stretch and won by an astonishing 19 ¼ lengths in 1:59.28, just off the Del Mar 1 ¼-mile track record of 1:59.11 set by rocketship Candy Ride in the 2003 Pacific Classic.

Following the win, Flightline was mentioned in the same breath (or Tweet) as recent stars like Ghostzapper and Arrogate and even horse racing’s most revered legend, 1973 Triple Crown winner Secretariat. High praise, indeed.

Consider that the Dubai World Cup Sponsored by Emirates Airline winner, Country Grammer, was a distant second, which made it a challenge for some speed-figure makers to arrive at an accurate number. Flightline ran a fast race in the Pacific Classic, but just how fast?

Flightline earned a 126 Beyer Speed Figure, the highest since Ghostzapper earned a 128 in the 2004 Philip H. Iselin Breeders’ Cup Handicap and tied with Formal Gold, Gentleman, and Will’s Way for second fastest ever. TimeformUS gave him a 152, which was the highest of the last decade by 10 points, besting the 142 Gun Runner earned for winning the Woodward Stakes Presented by NYRA Bets during his 2017 Horse of the Year campaign.

The Equibase Speed Figure and Brisnet speed rating for the Pacific Classic were less gaudy but still impressive. For his five races to date, Flightline has an Equibase Speed Figure line of 111-126-127-114-122 for his debut through the Pacific Classic, with the last three coming in Grade 1 races ranging from seven-eighths of a mile to 1 ¼ miles; his Brisnet ratings for the same races are 105-117-114-108-117. Consistently exceptional.

Timeform in Europe has Flightline assigned an annual rating of 143, six points higher than European star Baaeed, who is 10-for-10 in his career, 4-for-4 this year, and was considered by many to be the best active racehorse on the planet. From an all-time Timeform perspective, Flightline at 143 sits below only Frankel (147), Sea-Bird (145), and Brigadier Gerard and Tudor Minstrel (144). He is the only dirt horse in the top five, with eye-opening names just below him such as Ribot and Mill Reef.

When a racehorse is so fast that it causes multiple re-evaluations to make sure the numbers accurately assess a performance, we are talking about an elite talent in recent history and absolutely one of the two or three fastest horses this century. Flightline has won his five career starts by a combined margin of 62 ¾ lengths and no horse has been closer than six lengths to him at the finish line.

As for his chances in the Breeders’ Cup Classic, Flightline has much in his favor:

If Flightline brings his “A” game to Keeneland for the Nov. 5 Longines Breeders’ Cup Classic, the rest of the field is running for second. Even a “B-” race from a horse this talented might be enough to win the $6 million Longines Classic most years.

2022-09-06
Previous Post: I Don’t Want Him Looking Over My Shoulder
Next Post: BOLO for Scam Emails Pretending to be Sportsbooks