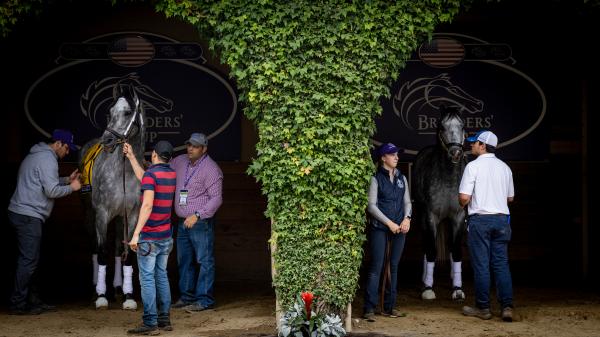 Less than 24 hours removed from the richest and most important victory of his 17-year training career, Brad Cox reflected on an “odd” feeling as he stood Nov. 7 amidst a quiet and mostly deserted Del Mar barn area.

A day earlier, Cox savored the sweet taste of success while watching Knicks Go win the $6 million Longines Breeders’ Cup Classic at the Southern California racetrack and wrap up Horse of the Year honors. Yet at the same time, there was the letdown of a third-place finish by Godolphin’s 3-year-old Belmont Stakes Presented by NYRA Bets and Runhappy Travers Stakes winner Essential Quality, who finished third as the 9-5 favorite in the final race of a spectacular career.

“I don’t know how to describe watching the race. It was odd,” Cox said about his initial Classic victory. “I thought Essential Quality put in a really, really good effort and didn’t get the set-up he needed. To win at this level, you have to get a good trip. Knicks Go had things his own way.”

Perhaps the key moment in the Classic came at the start when Medina Spirit broke slowly and jockey John Velazquez did not rush out to battle Knicks Go and jockey Joel Rosario on the front end.

That left the Korea Racing Authority’s Knicks Go with a clear lead that he held around both turns of the 1 1/4-mile Classic before pulling away to cross the finish line 2 3/4 lengths ahead of runner-up Medina Spirit in a fast 1:59.57.

“It’s huge to be able to capture the richest race in America and do it on an international stage, which is what the Breeders’ Cup is,” Cox said about the 5-year-old bred by Angie Moore. “Knicks Go was able to clear off and get some space on the backstretch and ultimately it led to him having enough in reserve to finish up extremely well.”

As well as Knicks Go finished up in the Classic, it will not be his finale. Cox and KRA officials say if the Maryland-bred son of Paynter continues to train sharply, the $8.6 million earner will close out his career bidding for back-to-back wins in the $3 million Pegasus World Cup Invitational Stakes at Gulfstream Park Jan. 29.

There, he figures to be more fiercely tested on the front end due to the presence of China Horse Club and WinStar Farm’s Life Is Good, who is also targeting the Pegasus after a dominant win Saturday in the Big Ass Fans Dirt Mile, the same race that Knicks Go won last year and which catapulted him to stardom.

Cox said Knicks Go will be shipped to Fair Grounds Race in early December to prepare for the Pegasus, but before that he will return to Kentucky Nov. 9 with Essential Quality and will be showcased for breeders over the weekend at Taylor Made Farm, where Cox is confident he will begin a successful stud career next year.

“I think the speed he has, he’s built for American racing on the dirt. That’s what he’s done and I’m hopeful that he’ll pass that on to his offspring,” said Cox, who took over the training duties for Knicks Go last year and won eight of 10 races after the horse had won just two of 14 starts before that. “I think he’s got everything it takes to be a stallion. He’s a Grade 1 winner, too. He was a Grade 1 winner at 4, 5. He’s traveled around the world and he’s a very tough, durable horse. He’s extremely sound and I think we’re in a day and age where horses go to stud so early and he’s a little bit of a throwback horse in that he’s raced at 4 and 5 and raced as much as he has. I’m so very proud of what he has accomplished this year and ending last year and hopefully he’ll pass it on as a stallion.”

Essential Quality’s next stop will also be life at stud for Godolphin and its Darley breeding arm at Jonabell Farm, where the 2-year-old champion, homebred, American classic-winning son of Tapit figures to be in high demand by breeders.

The Classic was just the second loss for Essential Quality, whose record of eight wins in 10 starts includes a fourth behind Medina Spirit in the Kentucky Derby Presented by Woodford Reserve and earnings of $4.75 million.

“There’s a lot that I’ll remember about Essential Quality,” Cox said. “He was probably my first big colt. He and Mandaloun [who was second in the Kentucky Derby] were my first big shots at winning the Derby. He was a champion and winning a Breeders’ Cup Juvenile like he did, it’s probably the second-biggest Breeders’ Cup race you can win in terms of establish value as a stallion. What he accomplished at 2 was amazing and to transfer that over at the age of 3 and win as much as he did and add two more Grade 1 wins at 3 at classic distance hopefully has him set up for a fantastic stallion career.”

While there might be some debate over the 3-year-old champion, since Medina Spirit finished ahead of Essential Quality in their only two meetings, the Kentucky Derby and Classic, Cox firmly believes the Eclipse Award should go to his 3-year-old Tapit colt.

“He would get my vote,” chuckled Cox, who does not have a vote in the balloting for year-end honors. “I can take nothing away from Medina Spirit. He ran a fantastic race and he’s got a nice résumé as well. But Essential Quality was able to capture two prestigious grade 1 races in the Travers and the Belmont, which is the ‘Test of the Champion’ and hopefully he is a champion and can add another trophy to his résumé come Eclipse time.”Joel Ros