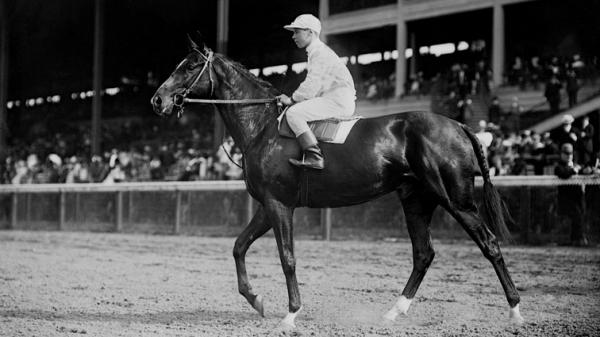 He was the most unexpected phenomenon—an unbeaten racehorse. The first racing superstar of the 20th century, Colin defied the odds, retiring with a perfect 15-for-15 mark.

Overcoming an ugly lump on his hock, bucked shins, and a series of infirmities as a youngster, when Colin hit the racetrack nothing slowed him down during the 1907-1908 seasons. The handsome seal-brown colt, who sported a star on his forehead with an elegant blaze, would be the last major racehorse to retire unbeaten in the United States until Personal Ensign in 1988.

“He had ‘it,’ that electrifying effect on racing men,” wrote turf scribe Abram Hewitt. “The blood surges, and the pulses quicken at the very sight of such Olympians on the track. When I listened to old-time horsemen talk about Colin there was another-world expression on their faces.”

Revered as one of the greatest Thoroughbreds ever bred in America, Colin’s 1908 Belmont Stakes victory — number 14 in a row — was his most courageous. Suffering from soreness in his front legs, racing in a violent thunderstorm and overcoming his jockey’s misjudgment of the winning post, Colin dug in and held on in the final strides to win by a desperate head over arch rival, Fair Play.

Foaled in 1905 at James R. Keene’s Castleton Stud in Kentucky, Colin sported the bloodlines to be a good one. He was from the third crop of foals by stakes winner and leading sire Commando (by the great Domino), who also had been bred by Keene. Colin’s dam (mother) was English stakes winner Pastorella, by Springfield.

An Englishman by birth, Keene, known as the “Silver Fox of Wall Street,” was the greatest stock market manipulator of his or, arguably, any time. A slightly built man who dressed in a black Victorian frock coat and derby hat, Keene sported a pointy beard and possessed cold, penetrating grey eyes, nerves of steel, and an iron will. He owned such top-flight runners as Sysonby, Commando, Domino, Peter Pan, Sweep, Ballot and Delhi.

And then there was the invincible, unbeatable Colin.

“I fancy Colin the best I have ever had in the stable,” Keene often remarked.

The colt was named for the pastoral poem “Poor Colin,” by English poet laureate Nicholas Rowe. It was a tip of the cap to Keene’s future Hall of Fame trainer, James Rowe Sr., who had developed many others in Keene’s galaxy of champions.

When Colin arrived at Rowe’s barn he turned up with an unsightly lump on his hock from an injury that occurred in a pasture accident. It was a grave concern to both Rowe and Keene. Known for his inordinate patience, the trainer devised a regimen which included robust daily massages and bathing in cold water spray. The well-mannered colt took it all in stride.

According to a report in the Thoroughbred Record, “He seemed to realize that the treatment was meant for his good, and he never gave his handlers the least trouble.”

When Colin competed in trials with Keene’s other elite youngsters on the farm, he flashed dazzling speed along with that indefinable touch of class. In his racing debut May 29, 1907 the lanky colt decisively whipped a field of 22 on the old straight course that angled across the Belmont Park oval. Next, Colin set a track record in the National Stallion Stakes, covering five furlongs in 58 seconds flat. Racing with bucked shins and toting 125 pounds in the Eclipse Stakes, Colin battled to beat H. P. Wheatley’s lightly weighted Beaucoup by a head.

In the final race of his 2-year-old season, Colin romped in the Champagne Stakes by six lengths, reeling off a record time of 1:23 in the 7-furlong race. He recorded 12 victories in 12 starts, earning $129,205 and was named division champion and Horse of the Year.

The New York Tribune reported on the Champagne Stakes: “Colin’s victory rounded out a career that is little short of marvelous. To win 12 straight races, 11 of which were stakes, extending over the full season, is a record that will make a bright page in turf history. Comparisons are odious, perhaps, and it is not intended to belittle the brilliant performances of great horses in the past, but Colin has established himself as the greatest horse ever bred and raced in this country.”

Very much a hands-on trainer, Rowe was well known for the personal care he gave his horses. He literally traveled in the same railroad car with them. In the racing landscape of the era, it was not a win in the Kentucky Derby but rather New York’s Belmont Stakes that owners and trainers most coveted for their 3-year-olds. To prep, Colin was entered in the mile-long Withers Stakes. He triumphed handily, holding off Fair Play and King James who got no closer than 2 lengths.

But all was not well. In the weeks leading up to the 43rd Belmont rumors swirled about Colin’s physical condition—from a general soreness to his front legs to an injured front tendon, or perhaps both were damaged. Clearly there was a problem with his forelegs. Tension built around the barn as Rowe declared the colt would not run in the Belmont, only to be one-upped by Keene who vehemently disagreed. The Belmont was a jewel long celebrated by New York’s “money kings.” In business and racing Keene rarely was trumped.

On May 30, Colin and his sore legs went to post on a rainy, foggy day in the 1 3/8-mile race.  Carrying 126 pounds, Colin was set to defend his unbeaten status versus Fair Play, King James, and Robert Cooper. Due to the murky conditions there was no race call in the first portion of the Belmont. When the horses emerged from the fog jockey Joe Notter had opened daylight on the field, six lengths ahead of Fair Play in a roiling sea of mud. Then disaster loomed.

Misjudging the finish line, Notter began to ease back his colt. When he realized his error, the horrified jockey implored his mount to reach deep down to find more in the final 50 yards. As always, Colin responded. Exhausted, leg-weary, and pelted by rain, the undefeated colt once again refused to surrender. The gallant son of Commando held on to score a victory by a short head.

The Montreal Gazette reported: “Not in many years, if ever, has there been such a demonstration of enthusiastic affection for a Thoroughbred as that accorded Colin as he passed the finish line for his fourteenth consecutive victory, with never a defeat against him … he was pulled up apparently strong and sound and as he came back to the judge’s stand, the crowd of more than 30,000 persons rose to their feet and cheered repeatedly while the band played ‘Hail to the Chief.’”

About three weeks later in his final race at 3, Colin scored an easy victory in the Coney Island Tidal Stakes. It marked his 15th consecutive victory, and his last. He earned $178,110 in two years of racing.

In 1909 with racing in New York crippled by the newly enacted legislation against gambling, Keene shipped Colin abroad in hopes of getting him right for a 4-year-old campaign. Sent to the yard of Sam Darling who had twice triumphed in the famed Epsom Derby, Colin first competed in a spirited six-furlong trial. But the latest stress put on his legs proved too much, and he soon suffered another setback that formally ended his career.

As Kent Hollingsworth wrote in “The Great Ones”: “Great horses have been beaten by mischance, racing luck, injury and lesser horses running the race of their lives. None of these, however, took Colin. He was unbeatable.”

Since the horse was in England when he was injured Colin initially was sent to stud at Heath Stud, near the English breeding center in Newmarket for a fee of 98 guineas. Colin proved extremely infertile and English breeders looked elsewhere. After Keene’s death in 1913, Castleton Stud bloodstock was dispersed at Madison Square Garden in New York. His infertility widely known, Colin was sold for $30,000. The 13-year-old Colin was sold again in 1918 for $5,100 and stood at Captain Raymond Belmont’s (son of August Belmont II) Belray Farm in Middleburg, Va.

Colin sired only 81 foals in 23 crops. He did produce 11 stakes winners, for an excellent 13 percent. His link in the Domino pedigree line survived and in recent decades Colin has been represented by Ack Ack, Yout, Teenoso, 1994 leading sire Broad Brush, and 1994 Breeders’ Cup Classic winner Concern.

Colin died at age 27 in 1932 at Belray Farm. Named No. 15 on The Blood-Horse magazine’s top 100 Thoroughbred champions of the 20th Century, Colin was inducted into the Racing Hall of Fame in 1956.

One of the greatest trainers in American racing history, Rowe had the last word on his beloved colt. Rowe wanted his epitaph to read: “He trained Colin.”

Editor’s Note: This story was first published in 2014 and has been updated.