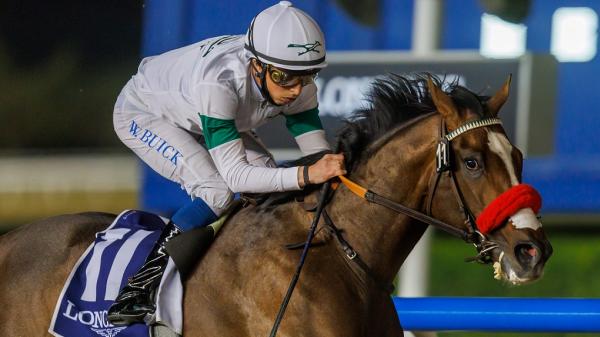 Hot Rod Charlie ran the locals off their feet in his Meydan Racecourse debut Feb. 4, setting himself up nicely for a start in the Dubai World Cup Sponsored by Emirates Airline seven weeks from now.

And his trainer, Doug O’Neill, who saddled two winners and two seconds on the seven-race card, served notice to potential rivals eyeing the big race, saying he had “undertrained” Hot Rod Charlie for the colt’s dominating score in the Al Maktoum Challenge Round 2.

Round 2 was the anticipated highlight of the fourth week of the Dubai World Cup Carnival, which now has reached its midpoint heading for Super Saturday March 5 and World Cup night itself March 26.

Although his final margin of victory wouldn’t indicate so, Hot Rod Charlie had to work for a while before drawing off in the final furlong to win the 1,900-meter (about 1 3/16 miles) Al Maktoum Challenge Round 2 by 5 ¼ lengths.

With William Buick taking the reins for regular rider Flavien Prat, Hot Rod Charlie broke well, got the rail position and raced head-to-head with Al Nefud and jockey Ryan Moore around the first turn, down the backstretch and around into the straight.

“I just wanted to keep it as simple as possible,” Buick said. “He was the best horse in the race.”

“What a ride,” O’Neill said of Buick’s effort. “He’s a wonderful horse.”

“I might have overtrained him going into his last race (second in the San Antonio Stakes at Santa Anita Park Dec. 26), and now, with the travel and all, we undertrained him a little bit,” O’Neill said.

“Now the plan is to keep him here, and it’s well spaced between here and the World Cup,” O’Neill said.

O’Neill, who has eight horses at the Carnival, is off to a rousing start. In addition to Hot Rod Charlie’s big win, he saddled Get Back Goldie to win the first Thoroughbred race on Feb. 4 card and also had two runner-up finishes.