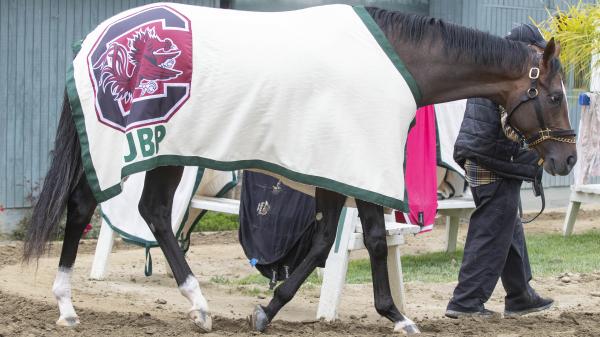 Horse racing fans have spoken, and they have chosen Hot Rod Charlie, the gutsy 3-year-old colt who was a force along the Triple Crown trail, as the winner of the 2021 Secretariat Vox Populi Award. Created by Secretariat’s owner Penny Chenery, the award annually recognizes the horse whose popularity and racing excellence best resounded with the general public and gained recognition for Thoroughbred racing.

Emerging as the favorite among the thousands of fans who voted in the year-end online poll, Hot Rod Charlie started the season as a longshot but consistently showed speed and determination that carried him through the Longines Breeders’ Cup Classic.

Hot Rod Charlie is owned in a partnership with Boat Racing LLC, Gainesway Stable, Roadrunner Racing, and William Strauss. Trained by Doug O’Neill and piloted by Flavien Prat, he was a surprise winner of the Twinspires.com Louisiana Derby and later finished third in the Kentucky Derby Presented by Woodford Reserve and second in the Belmont Stakes Presented by NYRA Bets, where his blistering fractions in the first quarter mile rivaled the record-setting pace set in 1973 by Secretariat. Later in the year, Hot Rod Charlie answered an infamous disqualification in the TVG.com Haskell Stakes with a breathtaking comeback in the Pennsylvania Derby, his first graded stakes win.

The Oxbow colt’s thrilling performances and his tenacity on the track endeared him to racing fans. Finishing in the money for five of his seven 2021 starts, Hot Rod Charlie tallied more than $2 million in earnings in 2021 and is poised for a sensational 4-year-old season in 2022. Off the track, his owners have donated a portion of Hot Rod Charlie’s earnings to causes such as the Melanoma Research Alliance to honor O’Neill family members who had succumbed to the disease, as well as the Folds of Honor Foundation and the Jake Panus Walk-On Football Endowed Scholarship Fund at the University of South Carolina.

“Hot Rod Charlie represents the heart and purpose of the Secretariat Vox Populi Award, and his feel-good story and grit as a competitor remind us why we love racing.” said Kate Chenery Tweedy, family historian and daughter of Penny Chenery. “Traditional awards may overlook his accomplishments, but this award celebrates his endearing connection with fans.”

“This colt has given our team such an incredible ride this year, and we are overjoyed he has been recognized as the winner of the Vox Populi Award,” Helm said. “We saw something special in him early on, and ‘Charlie’ has validated that time and time again. It means so much to us that fans have connected with him too.”

Hot Rod Charlie was one of a select group of six nominees submitted by the Vox Populi Committee and presented to thousands of voters in all 50 states and more than 40 countries who spoke as the “Voice of the People” in the Secretariat.com online poll. Other nominees were Echo Zulu, Essential Quality, Knicks Go, Letruska and Life is Good. Voters also had the option to write in their own favorite candidate to recognize other exceptional horses.