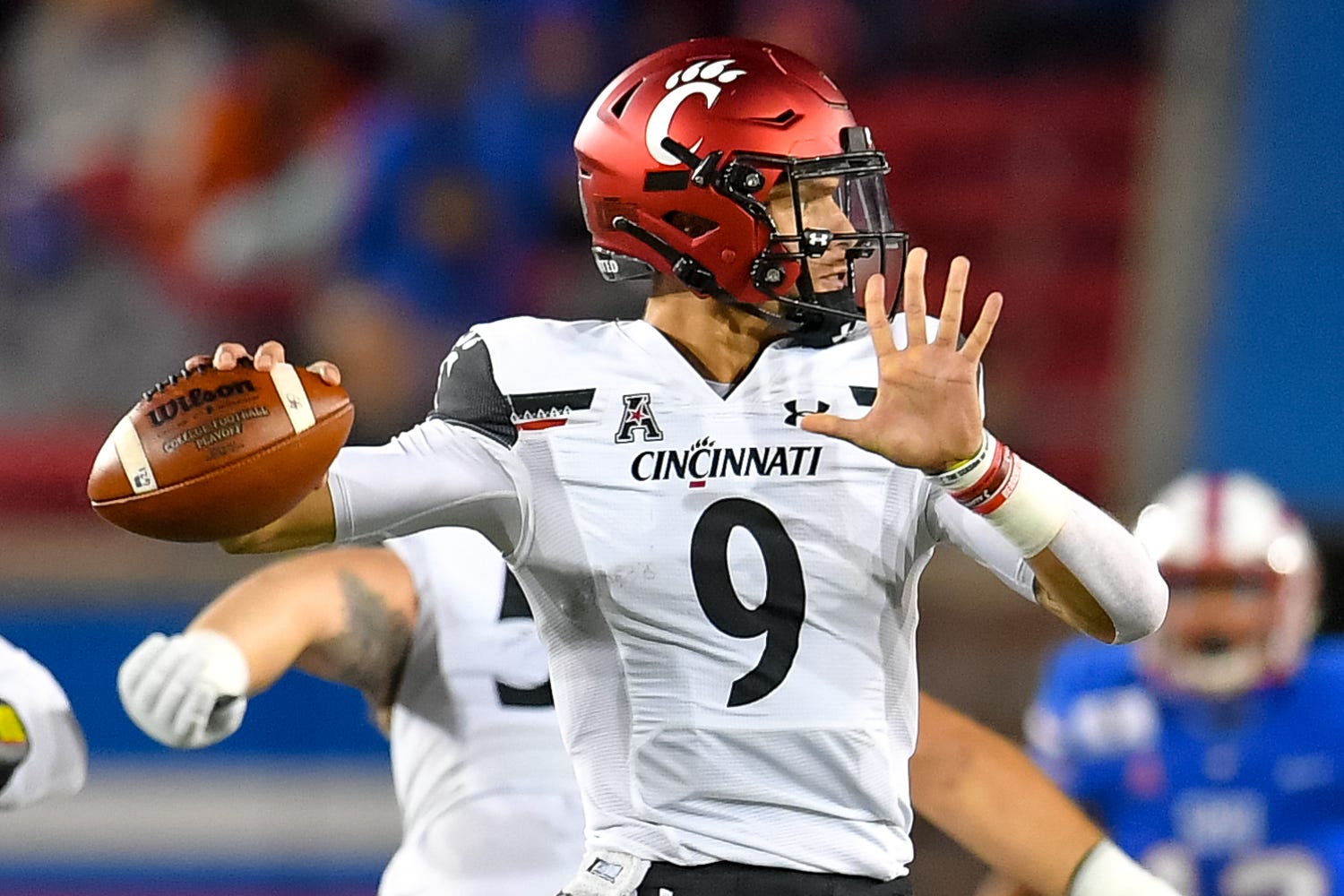 How Cincinnati Can Win a CFP National Championship

There has been plenty of speculation on how Group of 5 member Cincinnati can make the College Football Playoff. The Bearcats, of course, were left out of the original CFP top-4 rankings checking in at No. 6 in the initial poll.

After some shakeups Cincinnati is currently fifth in the latest CFP rankings. That is about to change come November 23 when the new CFP poll is released. Third-ranked Oregon was pounded by No. 23 Utah over the weekend and will likely drop a handful of spots leaving the Bearcats to move up into the No. 4 position.

But, what about the Bearcats winning it all? For many fans, there was never really a question as to whether or not Cincy would make the playoff. The question now is how Cincinnati can pull off an even bigger feat – winning a CFP national championship.

The first step is to simply dispatch East Carolina rather easily over Thanksgiving weekend to advance to the American Athletic Conference championship game. The Bearcats need 10-1 Houston to beat UConn in their final regular season game to allow the Cougars to advance to the AAC title game. UConn is 1-10, by the way.

Then, Cincy beats Houston in that championship game to advance to the national semifinals. The Bearcats would be 13-0, a conference champion, and would have wins over Notre Dame, Indiana (which doesn’t look all that impressive now), and a 10-2 Houston team.

Cincy’s best path to a national title requires a bit of maneuvering in the CFP rankings. That maneuvering is completely out of the Bearcats control, but it has already started with Utah’s upset of Oregon. That eliminates the Pac-12 from the CFP.

Now, it’s the Big Ten. Jim Harbaugh has yet to beat Ohio State as Michigan’s head coach. Cincy would really love it if Harbaugh found a way to pull off his first win over the Buckeyes this season. That would put 11-1 Michigan in the Big Ten title game against a likely 9-3 Wisconsin. If that ended up being the Big Ten championship game, it wouldn’t even matter which team won. The damage would be done.

With an Ohio State loss to Michigan, the CFP would be in disarray. The Bearcats would likely move up to No. 3. In the SEC, if things go as planned, Georgia will take on Alabama in the conference championship game. The ideal scenario would have the Bulldogs defeating their rivals in the SEC title game.

The CFP committee, with its affinity for the SEC, would likely keep a two-loss Alabama in its top 4 setting up a very interesting set of national semifinals. With Cincy moving up in the rankings they would avoid playing No. 1 Georgia right off the bat. Ideally, the Bearcats move to No. 2 and Alabama slides in at No. 3.

If Michigan wins the Big Ten title, it could be the Wolverines at No. 4. Preferably, Michigan would lose the Big Ten title game and the CFP would take a two-loss Ohio State at No. 4. The reason being that the Buckeyes have the offensive firepower to actually give Georgia’s defense some headaches.

If there is a team that can beat Georgia, it’s Ohio State. The Buckeyes offense is simply too good at this point of the year to be completely shut down by the Bulldogs. On the other end, Ohio State’s biggest weakness – pass defense – is not something that Georgia can exploit. Cincy’s best shot at a national title is to take on Ohio State, an upset winner in one of the national semifinals.

That would set up an all-Ohio national final. At that point, Cincinnati would be a huge underdog against the Buckeyes. In five of the seven CFP national title games so far, the lower-seeded team has won. Everyone loves an underdog and that is how Cincinnati could pull off a monumental dream season.

As of right now Cincinnati is way down the line as far as betting odds to win the title. They are 6th in line at +5000 odds. This means if you bet $100 at BetUS.com on Cincinnati to win it all and they do, you clear $5,000. Not too shabby.