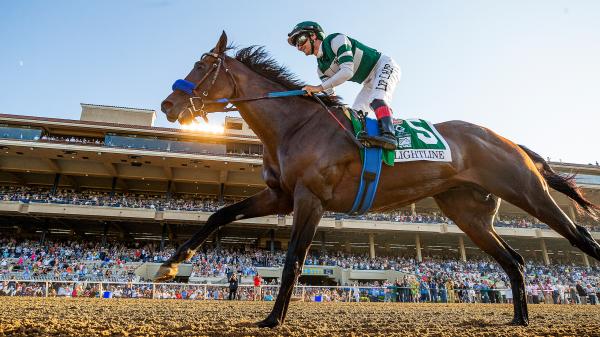 How Fast? The Fantastic Fleet Feats of Flightline

The excitement was palpable as Flightline cruised down the Del Mar homestretch, leading the field for the Grade 1  TVG Pacific Classic Stakes by a margin as wide as he wanted. Track announcer Trevor Denman said it best in his call of the race: “Take a good look at this, cause you’re not gonna see this too often, maybe never again.”

In recent years, few Thoroughbred racehorses have captured imaginations more than Flightline, because let’s be honest, few racehorses in history have displayed as much raw speed, talent, and potential as Flightline.

Numbers aren’t everything, but numbers do a good job telling Flightline’s story. He made headlines as an unraced yearling when he sold for $1 million, and the son of Tapit has made regular headline reappearances ever since. Now 4 years old, Flightline boasts an undefeated 5-for-5 record with earnings of $1,394,800. It’s safe to say he’s earned back his purchase price.

No one has come close to defeating Flightline. If he were a boxer, Flightline would have opened his career with five consecutive first-round knockout victories. He debuted on April 24, 2021, in a maiden special weight at Santa Anita and trounced his rivals by 13 1/4 lengths, completing three-quarters of a mile in the blazing time of 1:08.75. But Flightline ran even faster in an allowance-optional claiming race at Del Mar, winning by 12 3/4 lengths in 1:08.05. That’s a sustained speed of nearly 40 miles per hour, about twice as fast as the quickest NFL quarterbacks can run.

Then Flightline faced top-tier competition in Grade 1 Runhappy Malibu Stakes sprinting seven furlongs at Santa Anita, where he romped by 11 1/2 lengths in 1:21.37. Flightline was similarly impressive in the one-mile, Grade 1 Hill ‘n’ Dale Metropolitan Handicap at Belmont Park, romping by six lengths in 1:33.59 … and then came his jaw-dropping performance in the 1 1/4-mile Pacific Classic at Del Mar, in which Flightline inspired Trevor Denman and everyone else watching with a 19 1/4-length victory in 1:59.28.

Add up those margins of victory, and you come up with a staggering 62 3/4 lengths. One length is equal to the length of a running horse, and while more precise definitions vary, eight feet is a conservative number. That means Flightline has won his first five starts by a combined margin of at least 502 feet. That exceeds the height of the Great Pyramid of Giza (originally 481 feet tall), the Statue of Liberty (305 feet), Big Ben (315 feet), and a good many more of the world’s famous monuments.

Finding a comparable horse in racing history is difficult. The legendary Man o’ War won 20 out of 21 starts and frequently recorded large margins of victory, but his first five wins were achieved by an aggregate total of only 14 lengths. Seattle Slew won the Triple Crown while undefeated, but 31 1/4 lengths was the combined margin of victory for his first five starts. Ruffian got to 45 3/4 lengths during her first five blowout victories, but that’s not close to 62 3/4. Landaluce went 5-for-5 during her all-too-brief career, but her 46 1/2-length aggregate margin of victory falls well short of Flightline.

What about Flightline’s 19 1/4-length score in the Pacific Classic, which ranks as his largest individual margin of victory? That comes out to 154 feet, equal to an 11-story building. According to a Twitter report from Equibase (https://twitter.com/Equibase/status/1566468344684896257), no horse has recorded a larger margin of victory in a 1 1/4-mile, Grade 1 race since at least 1991. Few have come close; Arrogate’s 13 1/2-length romp in the 2016 Grade 1 Travers Stakes ranks in second place.

How fast is 1:59.28, Flightline’s winning time from the Pacific Classic? It works out to an average speed of 37.73 miles per hour. At that pace, Flightline could dash 100 meters in 5.93 seconds or 200 meters in 11.86 seconds, well below the human world records of 9.58 seconds and 19.19 seconds held by eight-time Olympic gold medalist Usain Bolt.

Speed figures provide further context to Flightline’s talent. Speed figures take raw race times and evaluate them against the speed of the racing surface, which can vary from day to day. Beyer Speed Figures have been published by the Daily Racing Form since 1992, and the 126 Beyer assigned to Flightline’s Pacific Classic ranks as the highest figure earned over 1 1/4 miles in the last 30 years. It’s also the second-highest figure posted over any distance since 1992, below only the 128 earned by Ghostzapper in the 2004 Grade 3 Philip H. Iselin Breeders’ Cup Handicap racing 1 1/8 miles.

Of all the horses in history, Ghostzapper is perhaps the best comparison to Flightline. Brilliant enough to win the Grade 1 Vosburgh sprinting 6 1/2 furlongs, but stout enough to nab the 1 1/4-mile, Grade 1 Breeders’ Cup Classic in the stakes-record time of 1:59.02, Ghostzapper posted four Beyer Speed Figures of 120 or higher.

Flightline hasn’t technically run as fast as Ghostzapper on the Beyer scale but give him time. Ghostzapper lost two of his first five starts and didn’t win a stakes until his sixth run. Furthermore, Ghostzapper’s five largest margins of victory combined to only 37 lengths, so Flightline has been winning by longer distances.

Racing fans are eagerly counting down the days until Nov. 5, when Flightline is expected to start as a heavy favorite in the Longines Breeders’ Cup Classic at Keeneland. If he can emulate Ghostzapper with a victory in North America’s richest horse race, Flightline will keep his unbeaten record intact, wrap up Horse of the Year honors … and enter the history books as one of the greatest racehorses to ever set hoof on a racetrack.