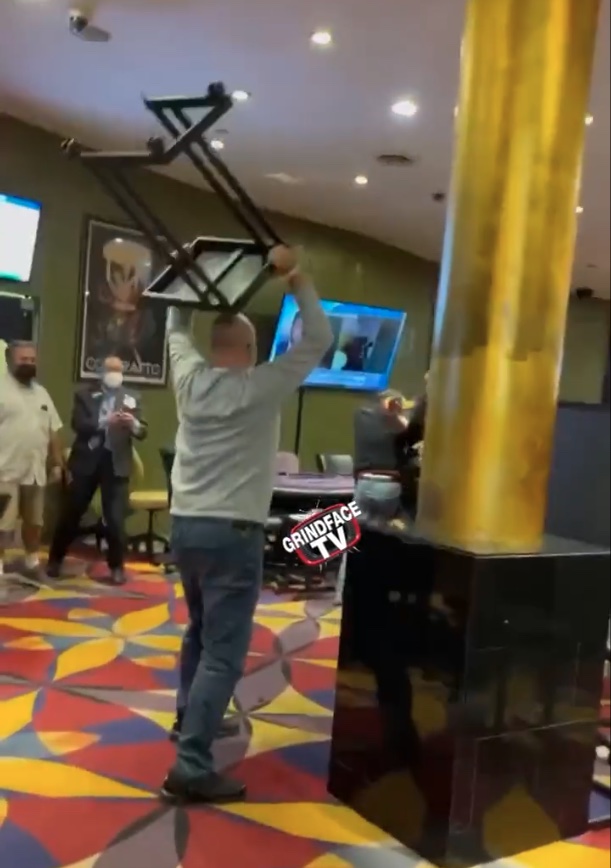 Verbal altercations are fairly common in casino cash game areas, but an incident that included flying fists — and furniture — turned the Hustler Casino in Gardena, California, into an impromptu WWE ring on Tuesday.

This player is about to be tased … and banned for life from the Hustler Casino, where a $1/2 NL game got out of hand. (Image: GrindfaceTV)

In a scene that looked like it was straight out of “Monday Night Raw,” an argument that started on the felt quickly turned physical, requiring casino security to step in and separate the combatants. Video of the incident can be seen below.

You know the 1/2 game is juicy when it turns into a no holds barred WWE match pic.twitter.com/VDI9C2rf21

There’s no indication as to what started the shouting match but, if you listen closely, it appears that the man on the left (gray sweater) shouts “yo mama” at his nemesis, which was enough provocation for the two men to begin throwing hands instead of insults.

When the fighter on the left hit his opponent with a wheeled table, security stepped in and tased him, ending the incident. A Hustler representative said the casino won’t release the names of the players involved, but did take steps to prevent the two from tangling again on the property.

“I can tell you that all parties are banned from Hustler as any form of violence is not tolerated,” Hustler GM Shaun Yaple said. “I do feel our security team handled the situation well.”

Unfortunately for the wannabe WWE star, he will not be able to attend the meet-up game later this month with real professional wrestler Biff Busick:

It’s not known if any arrests have been made in connection with the fight. Video of the altercation was posted on Twitter where it’s gone viral with 270K views and counting.

Hustler was in the news earlier in the week when its new streaming show, “Hustler Casino Live,” drew nearly 100K concurrent viewers during a high-stakes cash game that featured Phil Hellmuth and some of the biggest Twitch and Youtube personalities in the world, including Ninja, MrBeast, and Ludwig.