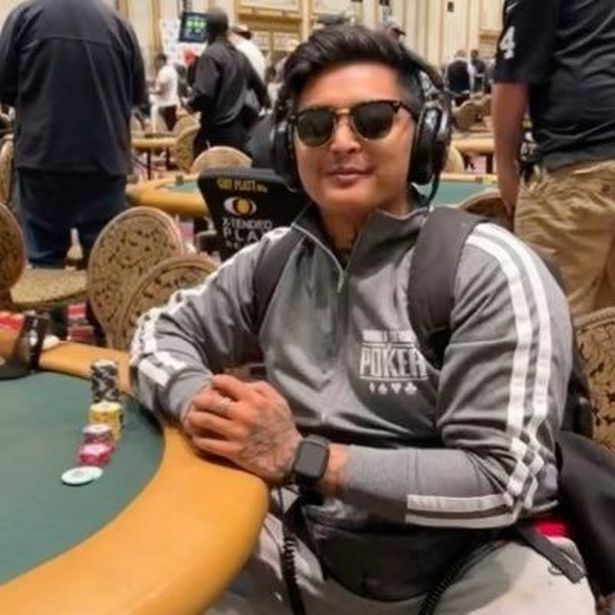 There has been yet another curveball in the ongoing saga from last week’s hand heard ’round the world played out on the “Hustler Casino Live” poker stream. In a statement that calls into question the security and integrity of the games, the show’s producers announced that a member of their team has been fired after video caught them taking $15,000 from Robbi Jade Lew’s stack while she was away from the table.

Bryan Sagbigsal, seen here at the 2022 WSOP, is a member of the Hustler Casino Live production staff. He’s been accused of stealing $15K worth of chips from Robbi Jade Lew’s stack last week. (Image: Twitter/@BryanLVC)

Bryan Sagbigsal, a long-time employee of High Stakes Poker Productions, was caught on video taking three $5,000 denomination chips from Lew at the end of the night. Sagbigsal admitted to the theft and was immediately fired from Hustler Casino Live. Lew, who appears to be trying to put last week’s drama behind her, says she won’t be pressing charges in connection with the theft.

Lew wants to move on

Lew released a public statement saying that “Upon learning that the employee was relatively young, with minimal funds, and no history of prior offenses, I came to the conclusion that pressing charges was unnecessary to damage a young man’s life that would already be negatively impacted by the news of the wrongdoing and termination of his employment.”

Unfortunately for Lew, her statement isn’t quite accurate, as the 24-year-old does has a history of crimes and arrests. In fact, he was arrested seven times from 2016 to 2018, when he was 18-20 years old, for multiple DUIs and violations of driving with a suspended license. He also tried to escape from prison in 2017.

In more breaking news, Lew released a direct message on Friday morning that she got on Twitter from Sagbigsal. In the message, he claims that he didn’t know whose stack he was stealing from, and that he needed the money to help support his two young children.

“I’m really really genuinely sorry from the bottom of my heart for stealing,” Sagbigsal wrote. “I made a split second decision that has now ruined my reputation and caused me to lose my only source of income my life is fucked even if I never have to spend a minute in jail,” he added.

Sagbigsal concluded by saying he had “fallen on really hard times” and didn’t know anyone who could help him. He added that he’s willing “to do anything” to pay Lew back. “Hard labor, clerical work, I’ll do anything to show you I’m sorry.”

It appears that Sagbigsal will be appearing on Joey Ingram’s podcast on Friday night, where several investigative breakdowns of the incident have already been posted.

Not long after the news broke, former poker pro Melissa Burr did some digging and found a Twitter account that has since been deleted that seems to belong to Sagbigsal. In a recent thread posted the day after the September 30 incident, the account “@BryanLVC” goes into a lengthy rant defending the integrity of the Hustler Casino Live setup up and live stream. These tweets carry new importance given the recent breaking news.

So…. an employee was able to take 15k off a players stack, ON A LIVE STREAM, WITHOUT ANYONE NOTICING … UNTIL NOW…

But yeah, everything is secure… right?

Here’s Bryan’s entire thread in case it gets deleted. pic.twitter.com/Hqb9arXL3l

Lew’s decision not to press charges raised some red flags, especially for some who previously expressed doubt that she cheated on the livestream. Many now believe that Sagbigsal could have been the inside man who was collecting his portion of the cut. Some were quick to point out that $15K is just about 10% of the money that Lew collected from Adelstein alone in the controversial Jack-Four hand.

Is the most ridiculous statement I’ve ever read. I was told I had $15k stolen so I asked if the robber had financial hardship. They said ya and he spent it so all good!!! I’m now fully on team cheat. I was wrong https://t.co/6Tb8XD2EcI

I had already gone from 85% not cheating to ~60% not cheating after some replies made me see that my Bayesian estimates were a little off.

The fact that someone from the crew stole chips from the table, and that it ‘coincidentally’ was from Robbi’s stack swings a lot for me.

You can move me a column to the left 😬

Garrett Adelstein has mostly stayed quiet on social media since the start of all the drama, but he did put out another statement after this news broke, hinting that there might be more information yet to come. He ends the tweet the same way he did his last, showcasing his support for the Big Brother, Big Sister foundation.

Although more information will soon come to light, I want to clarify I harbor no ill will towards anyone, especially those who have reconsidered their position. If you stand with me, please join me in supporting Big Brother, Big Sister by going to: https://t.co/jjKtdplxk4 https://t.co/zutt62vsCX

Hustler Casino Live tweeted out a second statement from their account but limited the comments on the post. Co-founder Ryan Feldman has yet to make any more public statements since this news broke, while Nick Vertucci did go to his Twitter and posted a personal message, one that he immediately pointed out is not an official statement.

Personal message NOT an official statement What I’ve learned though this is as follows. Very few people just want the truth. Most act like they do but only want clicks, views and attention at any cost. With no regard for human decency.