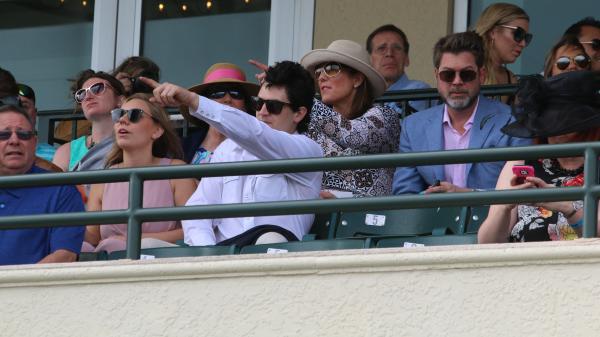 The Grade 2, $200,000 Ft. Lauderdale Stakes drew a full field of 12, plus one also-eligible entrant, running 1 1/8 miles on the Gulfstream Park turf, and there are quite a few horses with a chance to succeed.

Analyze It leads the field in purse earnings at $939,850, much of it earned as a 3-year-old in 2018 when he won or placed in a number of stakes including runner-up finishes in both the Grade 1 Belmont Derby Invitational and Grade 1 Secretariat Stakes before a narrow loss by less than a length when third in the Grade 1 Breeders’ Cup Mile to end that year’s campaign. Analyze It also enters the race with a win in his most recent start in October.

Two other horses enter the Ft. Lauderdale off wins — L’Imperator and Atone — with both going for their first graded stakes victories in this race. King Guillermo may be best remembered for his 49.20-1 upset in the 2020 Lambholm South Tampa Bay Derby on dirt. He makes his second start back following a fourth-place finish after being away from the races for more than seven months. Order and Law just missed by a neck in the non-graded Lure Stakes and may be this good, while Renaissance Frolic won the non-graded Mr. Steele Stakes on the Gulfstream Park turf in the summer. English Bee was competitive versus similar competition when beaten a neck in the Grade 2 Wise Dan Stakes in June 2020 but has won just one race in seven starts since then. Sole Volante was the runner-up behind King Guillermo in the 2020 Tampa Bay Derby after winning the Grade 3 Sam F. Davis Stakes, but he is another on a losing streak since last year, in this case going back eight races. Doswell finished second in last year’s Ft. Lauderdale at 15.60-1 odds and enters the race on a positive form cycle as he finished third behind L’Imperator last month. Space Traveller has the most class in the field by virtue of having run in three straight Grade 1 races since moving to North America last summer, with his best effort a runner-up finish in the Grade 1 Ricoh Woodbine Mile Stakes in September. Breaking the Rules finished third in this race last year and won as recently as August but finished sixth and seventh since then. Media Blitz and also-eligible Brown Storm round out the field.

Atone gets slight preference among a trio of win contenders, the other two being Space Traveller and L’Imperator. The reason for this is that Atone has won two of his last three races and finished second in the other, all coming shortly after being privately purchased from Godolphin and moved to the barn of Mike Maker. His first start for Maker in August was interesting as he pressed a fast pace while battling head-and-head with the leader from the start and until an eighth of a mile to go, before fading to sixth. Next time out in September when closing tactics were used, Atone ran one of the best races of his career, closing from eighth of 12 with a quarter-mile to run before rallying to win by a neck. Facing tougher foes one month later in October, Atone rallied for second and improved to a strong 104 Equibase Speed Figure, which he bettered to 106 in his most recent race when winning easily by 2 ½ lengths last month on the Aqueduct turf course. Likely to be in third or fourth early, but with the ability to rally from far back as well, Atone will benefit from the fact that up to five horses may want the early lead in this race. With consistent jockey Emisael Jaramillo (18% wins on 975 races this year) in the saddle, and for a trainer in Maker who gets his horses to hold top form at a higher-than-average rate than most trainers, Atone appears ready to step into graded stakes company and post the mild upset by repeating either of his last two efforts in Saturday’s Ft. Lauderdale Stakes.

Space Traveller has never run in a Grade 2 stakes like this one since coming to North America last summer. A Group 2 stakes winner at a mile in the summer of 2019, Space Traveller finished fourth in the Mr. D. Stakes (formerly the Arlington Million) last August before a huge run to end up second of 10 in the Woodbine Mile one month later. Next, in the Keeneland Turf Mile (formerly the Shadwell Turf Mile) in October, Space Traveller put in a big run to be beaten just a neck for third and three-quarters of a length for second. Those three efforts earned 108, 103, and 105 Equibase Speed Figures, which are some of the best in this field. Rested three months, Space Traveller put in an exceptional five-furlong workout in 58 seconds flat on turf eight days ago to tell us all he’s in tip-top shape. As such, this small drop in class from Grade 1 to Grade 2 could be just what Space Traveller needs to earn his first win in the U.S.

L’Imperator has won five of nine races in his career, including two of five since coming over to the U.S. in the summer of 2020. I think we can disregard his U.S. debut as it was on a soft course he obviously hated, and which led to 11 months away from the races. Since then, L’Imperator has won two of four starts, the most impressive of which was his most recent on Nov. 19 when winning by 2 ¾ lengths at the distance of 1 3/16 mils, very similar to the 1 1/8-mile trip of the Ft. Lauderdale. That effort tied his career best speed figure (105), which is the same as the figure Space Traveller earned in his most recent race and identical to the average of the 106 and 104 figures Atone earned in his most recent two races. That makes L’Imperator a strong contender and rounds out a trio I feel have an edge over the other 10 in this field.

Honorable mention goes to Renaissance Frolic, Analyze It, and King Guillermo. Renaisance Frolic has won four of 16 turf races at Gulfstream, including the Mr. Steele Stakes in July with a 105 figure. He subsequently ran poorly in the Mint Million Stakes at Kentucky Downs but some horses do not take well to the uphill and downhill nature of that unusual course, so back on his home track Renaisance Frolic could be good for a share of the purse. Analyze It is one of two from the barn of top trainer Chad Brown, the other being L’Imperator. Analyze It led from start to finish when last seen in a high-level allowance race at Belmont and earned a 100 speed figure. In summer 2018, he was a top turf star earning the bulk of his $939,850 in career earnings with big efforts in the Kentucky Utilities Transylvania Stakes, the Pennine Ridge Stakes, the Belmont Derby, and the Secretariat Stakes. King Guillermo has won one of two races on turf and moves back to the grass for the first time in two years since breaking his maiden in the second start of his career. That effort earned a 105 speed figure and two races later he earned a career best 110 Equibase Speed Figure when posting the big upset in the Tampa Bay Derby. King Guillermo finished second in the Arkansas Derby that year then went off form, losing badly in three straight races, but after seven months off put in a big effort to be fourth after battling head-and-head for the early lead in October. Getting top jockey Paco Lopez and with two sensational workouts coming into the race (the second best of 149 and the best of 140 at the distance), King Guillermo is sending all the right signals for a competitive effort.