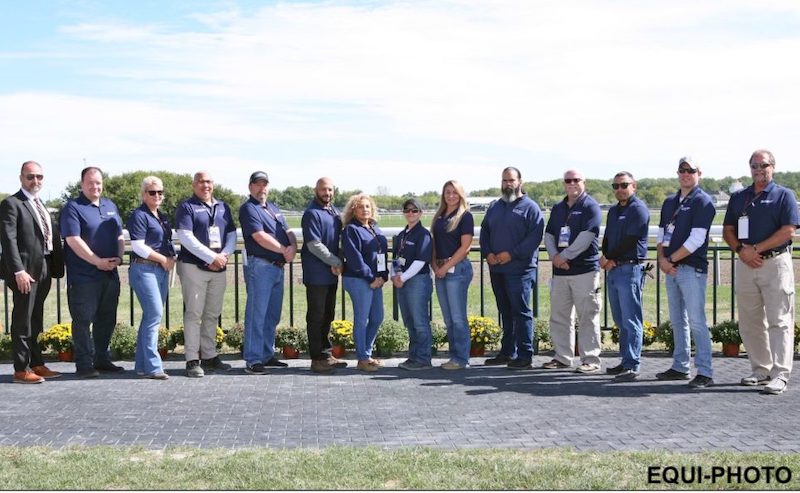 The following press release written  by J.N. Campbell was distributed by the Organization of Racing Investigators

Investigators from multiple jurisdictions assembled the week of Sept. 19 in what amounted to a barnstorming tour across Pennsylvania’s three Thoroughbred tracks, as members of the Organization of Racing Investigators took the stage.

A handpicked team of specialists from Pennsylvania, Texas, California, Arizona, Florida, and Kentucky were onsite at Presque Isle Downs in Erie, Hollywood Casino at Penn National Race Course in Grantville, and finally at Parx Racing in the Philadelphia area. Jason Klouser, director of enforcement, Pennsylvania State Horse Racing Commission, led the effort. The capstone to the week was the Grade 1 Pennsylvania Derby for 3-year-olds, which was part of a blockbuster Sept 25 card at Parx that also included the G1 Cotillion Stakes for fillies of the same age.

By establishing a strong presence, the Racing Integrity Teams at each site protected Thoroughbreds, ensuring that equine safety and integrity were the top priorities. The investigations at Parx produced some important results, after sweeps at the gate and stable areas. The Pennsylvania State Horse Racing Commission, Bureau of Thoroughbred Horse Racing, issued a series of rulings concerning three individuals.

The first was jockey Edwin Repollet-Rivera, who is alleged to have violated Section 305.273 (h) and 185.2, by possessing an electrical device. The hearing for the rider was Sept. 26, in which he refused to testify, and the summary suspension from Sept. 23 will continue until a full hearing takes place. Under Horseracing Integrity and Safety Authority regulations, the jockey faces a 10-year ban.

The second violator was trainer Miguel Penaloza. After an investigation of his barn area, a pair of loaded syringes and a needle were found in his tack room. He is scheduled to appear before the board at 10 a.m. on Tuesday morning, and is in potential violation of 7 PA Code, Section 401.61 and 185.2.

Last but not least, trainer Cesareo Marquez was found to be in possession of multiple loaded needles and syringes, and he also could be in violation of 7 PA Code, Section 401.61 and 185.2. Like Repollet-Rivera, his hearing was also on Monday. With a suspension that started on Sept. 23, the board ruled it will continue as well.

Each of these license holders is denied the privileges of all grounds under the jurisdiction of the Pennsylvania State Horse Racing Commission. They have the right to appeal these decisions in writing, within 48 hours for rulings that involve entries, qualifications, weights, conditions, or the length or running of a race, and 10 days for all other infractions.