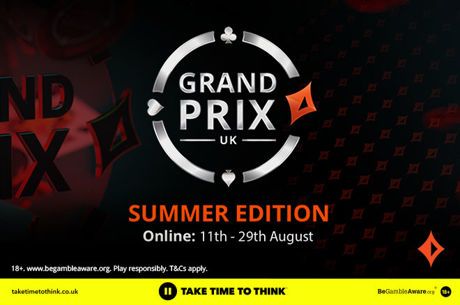 PartyPoker is the place to be right now if you are a fan of progressive knockout tournaments. Why? Because the Grand Prix KO Summer Edition festival is in full swing. The Grand Prix KO Summer Edition series features 14 numbered PKO events with juicy guarantees across a range of buy-ins. The crown jewel is a $109 buy-in Main Event boasting of a $500,000 guaranteed prize pool.

Scanning down the Grand Prix KO Summer Edition lobby at PartyPoker reveals the opening two events, which have since crowned their worthy champions, saw overlays and those overlays look set to continue throughout the series. The combination of only one re-entry per flight, which is fantastic for levelling the playing field, the fact many high stakes players are either in Barcelona for the European Poker Tour or are planning to head to the Mediterranean Poker Party, and the more recreational players using their one time at the upcoming GUKPT Goliath festival, in addition to it being the traditional vacation season for Europeans, mean there is a lot of value to be had from this series.

The $33 buy-in $75,000 guaranteed Opener drew in a 2,345 crowd across several flights, with 358 of those starters progressing to Day 2, doing so with a min-cash in tow on top of any bounties they collected along the way.

All but two of the players who reached the nine-handed final table walked away with four-figure scores for their $33 investment, while Denmark’s Magnus Thomsen secured the lion’s share of the $75,000 pot. Thomsen defeated Piotr Drgas heads-up to reel in an $8,313 score, resigning the runner-up to a $6,474 consolation prize.

Ukraine’s Oleksii Kotliar was the last player standing from a field of 3,572 in the $3.30 buy-in $15,000 guaranteed Mini Opener. That field size meant PartyPoker added almost $5,000 to the prize pool to ensure the guarantee was hit. While that is obviously bad news for PartyPoker, it was great news for anyone who reached the money places.

Kotliar and Guillermo Chena, who the Ukrainian defeated heads-up, got their hands on the tournament’s only four-figure prizes. Runner-up Chena banked $1,164, with Kotliar padding his PartyPoker balance with an impressive $1,551, giving him plenty of ammunition for the rest of the PKO-centric festival.

Check out the table below for details of the remaining Grand Prix KO Summer Edition schedule.

The Grand Prix KO Summer Edition Main Events are massive, with the $109 edition guaranteeing at least $500,000 will be paid out, and the $11 Mini Main Event featuring a $100,000 guaranteed prize pool.

A couple of dozen Day 1s remain for both the Main Event and Mini Main Event. These Day 1s run several times per day up to and including August 29, when the business end of the tournaments takes place.

Each Day 1 sees players sit down behind a generous stack of 100,000 chips and play to blinds starting at 400/800/100a. The blinds increase every eight minutes in the $109 Main Event and every seven minutes in the $11 Mini Main Event. A single re-entry per flight is permitted up to the end of the tenth level, and play concludes when only 15% of the field remains. Those top 15% of players progress to the August 29 Day 2 with a min-cash guaranteed.

The Main Event and Mini Main Event operate a best stack forward policy, meaning you can fire multiple bullets even if you navigate your way to Day 2. Not happy with your Day 2 stack? Take another shot and see if you can improve matters.

Fans of jackpot sit & go tournaments should look into playing some of the Grand Prix KO Summer Edition SPINS if they want to play in the festival’s higher buy-in tournaments for only $10. These SPINS pay out wither $20 in cash or tournament tickets for Grand Prix KO events ranging from $33 up to the $320 High Roller.