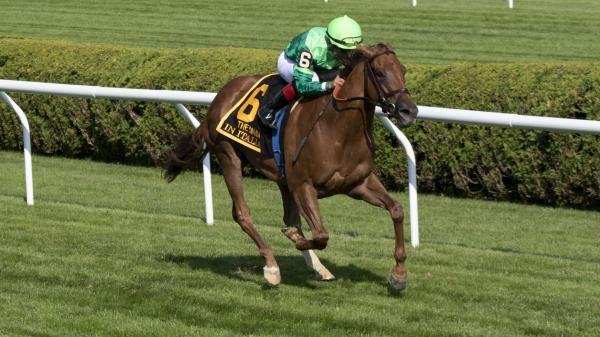 Out on the Mellon Turf Course, 4-year-old filly In Italian was just rolling along in the $500,000 Diana Stakes at Saratoga Race Course July 16. Really, she was torching the Spa lawn, running the first quarter-mile in :22.45 seconds and the half in :45.83.

Up in his clubhouse box seat, Peter Brant, the owner of In Italian, took a glimpse at those splits and thought this:

Brant changed his mind on his gutsy filly as he watched her and jockey Joel Rosario never relinquish the lead despite setting the swift fractions in the 1 1/8-mile race on the firm course.

When the running was done, In Italian had checked plenty of boxes for Brant and trainer Chad Brown.

This also gave Brown his seventh win in the first Grade 1 race of the Saratoga summer. No one has won more in the 84 editions of the race.

In the winner’s circle, Brown, as is his style, refused to take the credit. While humbled to get this win, he deflected any praise to his staff, like he always does after a big win.

“It’s not just the right thing to say, it’s the truth,” Brown said. “When you are the lead singer in the band, you will have the tomatoes thrown at you; you are the first one to get the applause. When you train 100s of horses and you have 100s of employees—that I call teammates —it’s a lot of work.”—Tim Wilkin

When Brad Cox received a phone call asking if he wanted to train a 2-year-old colt named Mo Strike for Nassar Bin Omairah, he was caught off guard. He had never trained for Bin Omairah, was unfamiliar with the name, and the request involved just a single horse.

Was Cox’s name picked out of a phone book?

But when Cox did his homework, he learned that Mo Strike was a son of Uncle Mo out of the Smart Strike mare Featherbed. The colt was on his short list from the Gene Recio consignment at this year’s OBS Spring sale of 2-year-olds in training. So, he agreed to take him.

“He was a good-looking horse and I liked his works, but [Bin Omairah] bid on him and got him,” Cox said.

Standing in the winner’s circle on the first Saturday of the prestigious Saratoga Race Course meet, Cox was quite happy he brought Mo Strike into his barn. The $325,000 purchase improved his record to 2-for-2 by spurting clear in the final sixteenth and taking the $175,000 Sanford Stakes on July 16, a day when 30,024 showed up at the Spa and all-sources handle was $37,068,005.

“He definitely showed some ability and fought off a good horse at the eighth pole. It was a big win,” Cox said.—Bob Ehalt