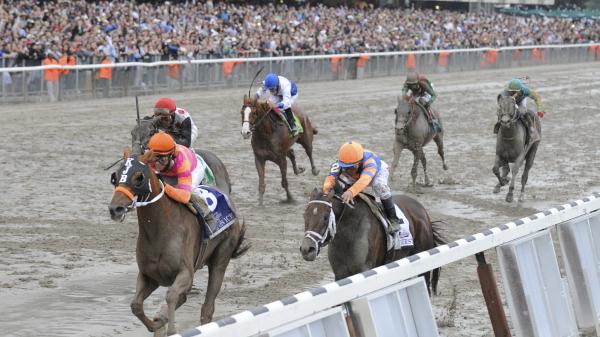 Inside the Numbers: The 2022 Belmont Stakes

Like the first two jewels of horse racing’s U.S. Triple Crown, the Belmont Stakes has a rich history dating back to its inception in 1867 that means there is no shortage of interesting numbers associated with the race called the “Test of the Champion.”

This year’s Belmont Stakes Presented by NYRA Bets will be held Saturday, June 11 at Belmont Park, but because this year’s Kentucky Derby Presented by Woodford Reserve winner, Rich Strike, skipped the Preakness Stakes, there was no possibility this year for a Triple Crown bid.

Read on for a slew of fun figures in advance of the 2022 Belmont Stakes.

1 – The number of times the Belmont preceded both the Kentucky Derby presented by Woodford Reserve and the Preakness Stakes. It happened for the first and only time in the race’s history in 2020 when Tiz the Law won the race after it was pushed back two weeks due to the pandemic and shortened to 1 1/8 miles. The Kentucky Derby was postponed that year to the first Saturday in September due to the COVID-19 pandemic while the Preakness Stakes moved to the first week in October.

1 1/2 miles – The Belmont Stakes is the longest race of the Triple Crown at 1 ½ miles. With the grueling distance and its normal place as the final race in the Triple Crown, the nickname “Test of the Champion” is fitting.

2:24 – The fastest time the 1 ½-mile Belmont has been completed in. Secretariat set the record in 1973 when he swept the Triple Crown.

3 – The number of times the 1 ½-mile Belmont Stakes was decided by a nose (the smallest margin of victory) or less since 1905, with the most recent coming in 1998 when Victory Gallop edged Real Quiet by a nose to spoil the latter’s bid for the Triple Crown.

5 – Hall of Fame trainer Woody Stephens won a record five consecutive Belmont Stakes from 1982 to 1986, a record that will be exceptionally difficult to equal or break. Stephens’ winners were: Conquistador Cielo (1982), Caveat (1983), Swale (1984), Creme Fraiche (1985) and Danzig Connection (1986). No other trainer has won more than three straight editions of the race.

12 – The number of 3-year-olds that completed the Kentucky Derby-Belmont Stakes double (not counting Triple Crown winners), most recently Thunder Gulch in 1995. Rich Strike will try to join that exclusive club in 2022.

15 – The number of odds-on favorites who have won the Belmont Stakes, from 35 horses sent off at even money or less, including Tiz the Law at 4-5 odds in 2020.

18 – The number of 3-year-olds that completed the Preakness-Belmont Stakes double (not counting Triple Crown winners), most recently Afleet Alex in 2005.

23 – The number of fillies who have raced in the Belmont. Three of them won: Ruthless (1867), Tanya (1905), and Rags to Riches (2007). Longines Kentucky Oaks runner-up Nest is expected to become the 24th filly to compete in the race in 2022 and looks like a serious contender to join Ruthless, Tanya, and Rags to Riches in the history books. The most recent filly to contest the Belmont Stakes was Unlimited Budget in 2013.

24 – The number of Belmont Stakes winners (since 1905) to start from post-position No. 1. While the inside post position has not produced a Kentucky Derby winner since Ferdinand in 1986, the inside post in the Belmont Stakes has produced nine more wins than any other position in the starting gate, including most recently Justify in 2018 when he became the 13th Triple Crown winner.

31 lengths – Record margin of victory when Secretariat won the 1973 edition to become the first Triple Crown winner in 25 years.

37 – The number of times inclement weather has led to the Belmont Stakes being contested on an “off” track, for 24.2% of the total. The most recent was in 2011 when Ruler On Ice won on a “sloppy/sealed” track.

42 – The number of horses who have won the Belmont and at least one other Triple Crown race, including 13 Triple Crown winners who swept the series.

65 – The number of winning favorites in the 153-year history of the Belmont Stakes, which amounts to a 42.5% win rate for the top betting choice.

103 – Kentucky is the leading state for producing Belmont Stakes winners with 102 winners bred in the Bluegrass State. Virginia is a distant second with 11 Belmont Stakes victors.

138 – The number of years between New York-bred winners in the Belmont Stakes. Tiz the Law won the race in 2020 to become the first state-bred winner of New York’s Triple Crown race since Forester in 1882, ending a long drought.

700 – The approximate number of white Colombian carnations that adorn the Belmont winner’s blanket.

1867 – The year the first Belmont Stakes was contested, making it the oldest of the three Triple Crown races.