Welcome to the Fox Report. I’ll be at the World Series of Poker almost every day playing cash games, taking photos, and gathering information about things that are happening at the WSOP. If you can’t make it to the series in person, I’ll do my best to bring the series to you. It’s like a virtual reality visit to the WSOP without the annoying VR glasses and the risk of running headlong into your flat screen television.

I’ll also be including a ton of photos in these reports. Most of them will end with a photo gallery of interesting pics from the last few days. If you get a great photo or a tip on an interesting story, let me know on Twitter @foxpokerfox.

It’s happening. The WSOP is finally on the Strip. We have a new venue, tons of space, better options for entertainment, food, and hotel rooms and, so far, it looks great.

Jack Effel convinced me that this year will be a significant upgrade in terms of space, organization, and player experience, but as a lifelong sports fan, I know better than to get my expectations too high just because the coach says “this is our year.”

That said, the rooms are big and spacious with around 160K square feet of space and almost 600 poker tables. There are now 16 cashier windows, which is a nice upgrade and should help with lines. There are also lots of Fastrac machines to help players register without standing in line if they’ve deposited money in the system online.

The cards and chips are brand new and seem good so far. The cards felt a bit stiff and thin, and players expressed a fear that they would break easily, but in the cash games I played yesterday, they were great. Only time and the scrutiny of the high-stakes mixed-game players will tell us if the cards hold up well enough in the daily grind of thousands of trips through the shuffle machines.

The button is either the same tiny little plastic thing they used last year or something very similar. It was roundly mocked by the players and often got lost in the black and white chip logo that was in front of me in the three-seat in my cash game. There must be a reason for this; saving such a tiny amount of money to have cheap buttons just doesn’t make sense.

The Casino Employee event is traditionally event #1 and has been on Labor Day in recent years, but this year, it was a day later. Turnout was great, with 832 entries. I shot some photos of my friends playing the event and was pleased to see a ton of experienced dealers returning for the series. 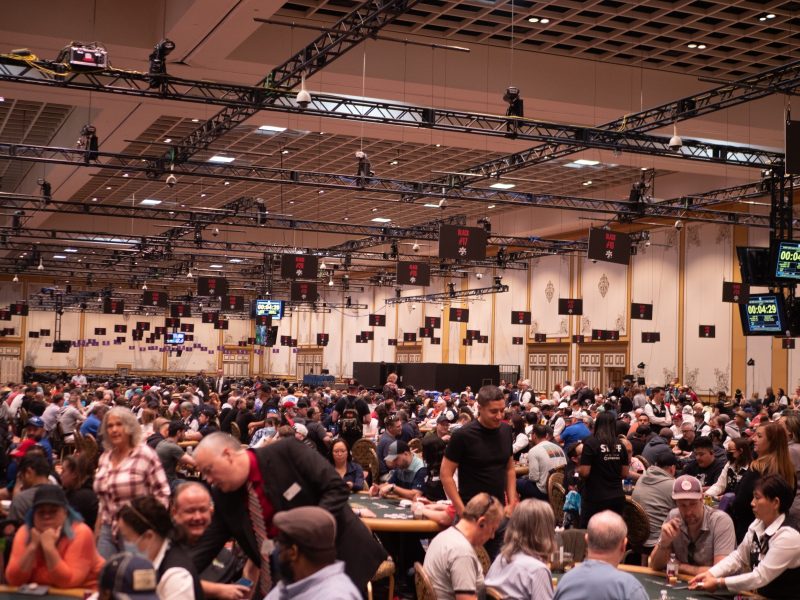 Even with more than 800 players, the casino employee event only took up a fraction of the available space. (Image: Chris Wallace)

We had a number of inexperienced dealers in our cash game, but they all had good attitudes and, as long as they’re interested in getting things right, dealers are usually just fine within a week or two. The good news is that this was probably attributable to the fact that the Casino Employee event had most of the experienced dealers on the other side of the felt. Honestly, I think the dealers will be fine this year.

Some of those dealers have probably returned after skipping a few years because the pay increased significantly this year. Well done by Effel, Ty Stewart, and whoever else influences those decisions. The higher pay brings in better dealers and ensures that they’re happier, which makes the whole WSOP experience better for everyone.

Not everything was perfect, however. Registration for single table tournaments had to be done across the hall in the tournament registration area because the cage in the Champagne Room wasn’t ready yet. I was told this will be fixed within a day or two. It’s still a hassle to buy in, but it won’t be as bad as it was yesterday.

I will never understand why the WSOP makes it harder to buy into these things. They’re a great moneymaker for them — probably better even than cash games in terms of hourly per table — but it seems like every year, Effel and company install more speed bumps in the path of players who want to join them. I played almost $70K worth of single-table tournaments in 2012 in less than a month. I’m not sure that would be possible with the current system where you have to wait in line to buy a ticket and then hope the table hasn’t started by the time you get your registration, or you have to wait for another one.

I haven’t played more than a few of these things since the system was changed a few years ago, and now they’ve given players yet another reason to stop playing them by “strongly discouraging” the selling of the lammers that the winners get. Meaning, the WSOP doesn’t want players grinding these tournaments and selling lammers; they only want people playing them who are going to play the big tournaments with those chips.

While I could easily sell these lammers at face value to my friends who are playing tournaments, some players don’t have that option. New players would have no idea what to do with those lammers if they’re unable to play the tournament they were planning to enter.

When I went to cash out my chips from my cash game, I stood in line for six minutes. Not a huge deal, but players aren’t used to standing in a significant line just to cash in chips. The process is so simple and fast that an extra window or two dedicated to buying and cashing out real-money chips would solve the problem instantly. Chip runners would be nice too, but I don’t expect to see that happen at the WSOP anytime soon.

Shut up and deal?

The first call of “shuffle up and deal” was actually “shut up and deal,” and was done by restaurateur and real housewife, Lisa Vanderpump. She isn’t known for being a poker fan and has no previous cashes that I could find, but she does have a close association with Caesars Entertainment, and a restaurant in the Paris Casino, so I guess it makes sense. 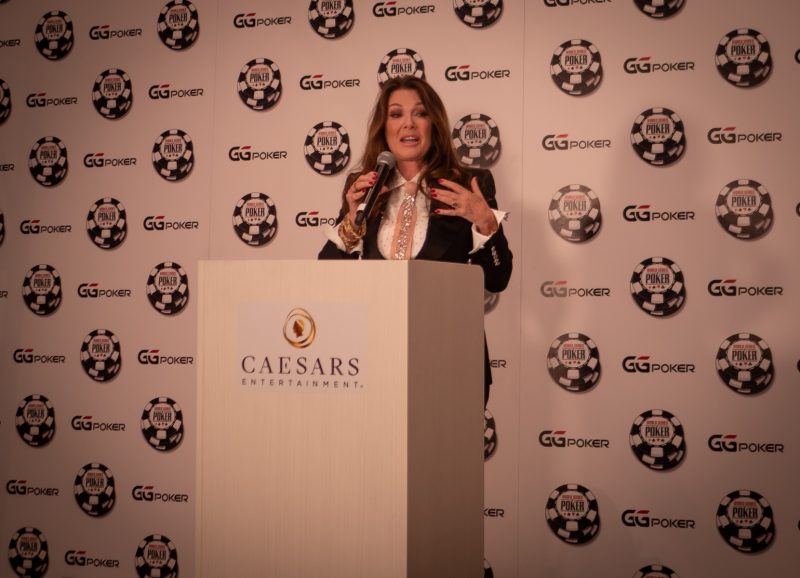 Lisa Vanderpump initially said “Shut up and deal” and got a few laughs. (Image: Chris Wallace)

Vanderpump seemed personable, and her dog was charming, but weren’t we supposed to have Vince Vaughn doing this? An actual poker player? Vaughn was announced as the master of ceremonies for the 2022 WSOP months ago, and he definitely has a connection to poker, so players seemed pleased with the choice.

So far, there have been no Vaughn sightings and no mention of him in the press conference a few days prior, or in comments from the WSOP on opening day. Is Vaughn out, or are we just waiting for him to arrive?

Vanderpump was surrounded by media and fans taking pictures while she played, and she got a nice double-up with aces early on, but was gone before dinner break. 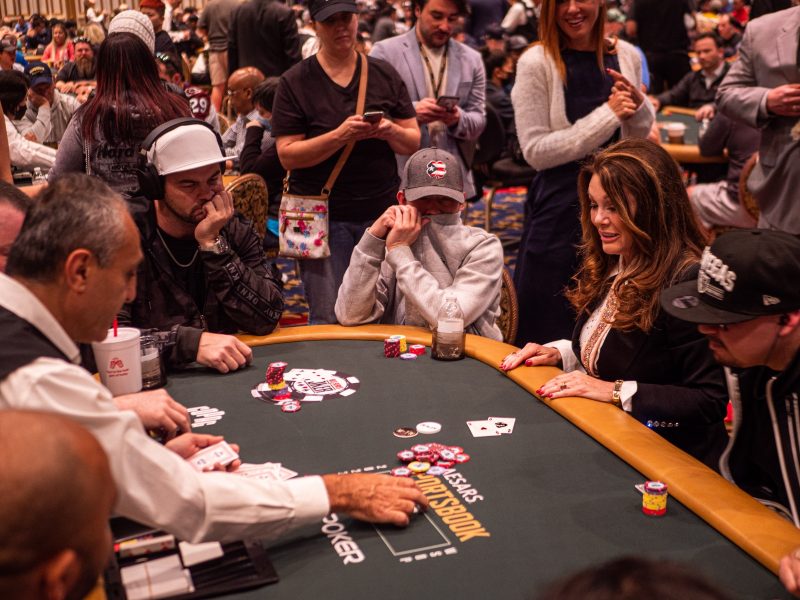 We don’t know how much she knows about poker, but Lisa Vanderpump definitely knew enough to get it all in with aces. (Image: Chris Wallace)

Stars in the house

The $100K bounty event, which features a $25K bounty on each player, appears to be the highest buy-in bounty event ever, and it was a good decision by the WSOP to run it on the first day. It had a small field, so finding dealers wasn’t a problem, even with hundreds of them playing the Casino Employee event. And it brought in the stars right away.

Daniel Negreanu, Phil Ivey, last year’s Main Event winner Koray Aldemir, and a host of other big names showed up. I recognized almost every player in the 46-person field. And Ivey wasn’t the only interesting name that we weren’t sure we would see. 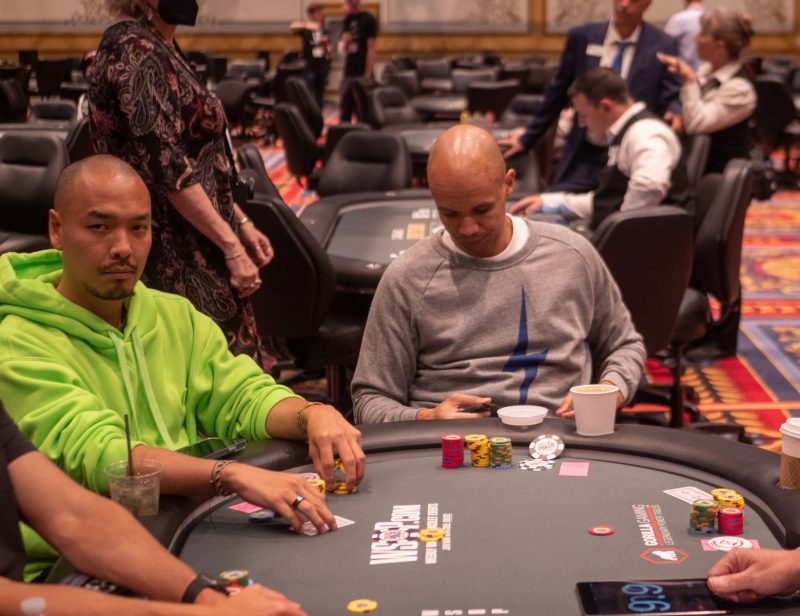 Bryn Kenney and Sergi Reixach, both implicated in a cheating scandal in recent months, played the event. Given the acceptance of controversial figures in the past, from Chris Ferguson and Russ Hamilton to Chino Rheem (who also played this year), we shouldn’t be surprised. The poker community doesn’t shun players just because of a scandal, even if it looks really bad. I wish we were better about that, but star power goes a long way, and poker rooms are unwilling to send players away for fear of lawsuits or just losing the rake they pay.

Phil Hellmuth was notably absent. I would expect to see Phil very soon, but rumored intestinal distress kept him away from Ballys on Day One.

One of the downsides of the Rio was always the miserable food. The event center was a long walk from any food other than the poker cafe, and even if you made that walk, the options were limited and mostly underwhelming. All American Dave did well, but the poker cafe was roundly mocked. 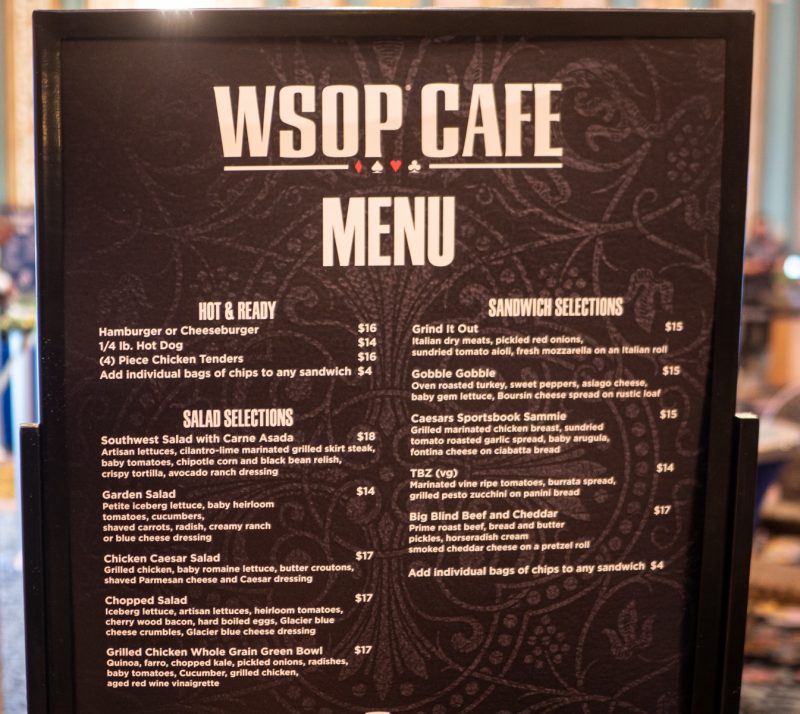 The mocking continued this year as I heard “I’d rather blow my money on a $14 hotdog than call that bet.” from a player facing a huge over-bet on the river. The prices have increased yet again, with a hamburger sitting under a heat lamp now costing $16.

The good news is that there are so many more options now. In a five-minute walk, players can find at least 30 places to eat, and every one of them is better than the poker kitchen. The walkway between Paris and Ballys has some good options, and there are restaurants on each casino’s floor, too. And, in front of Ballys, there’s an outdoor mall made from shipping containers that has a ton of great, inexpensive food options.

I expect the poker kitchen will be a great place to have a quiet conversation because the food offerings won’t bring in much traffic. I wouldn’t be terribly surprised to see it updated or removed entirely when players ignore it in favor of better options.

I hope you enjoyed this, our first edition of the Fox Report. I’ll be back in a day or two, and every few days throughout the WSOP.

The Festival Tallinn Is a Must-Play Live Series; Starts June 27